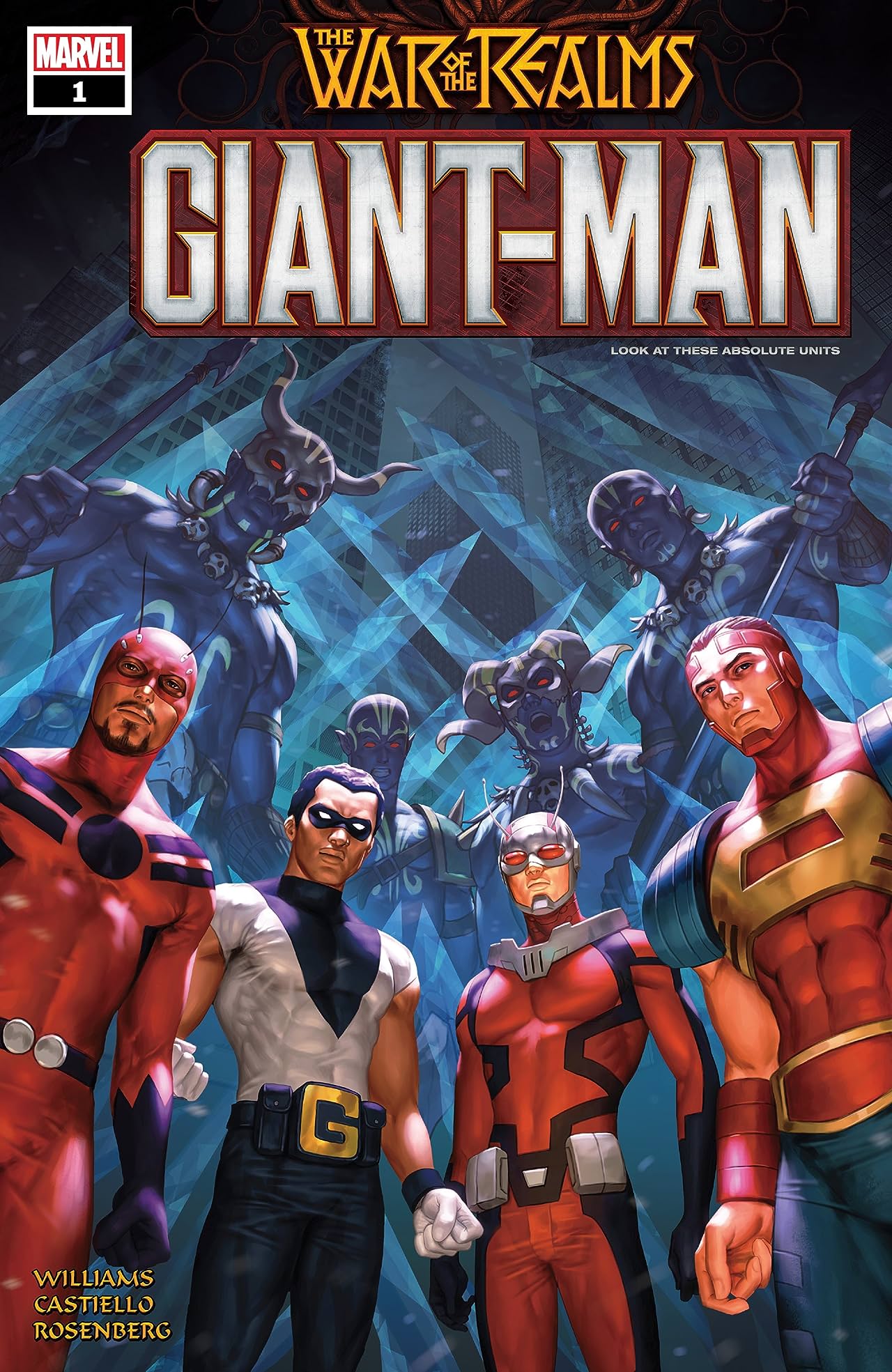 War of the Realms: Giant-Man

Giant-Man is not a title you see on the shelves. While many have claimed the title, including Clint Barton a.k.a. Hawkeye, Giant-Man doesn’t get an eponymous series. Ant-Man, yes, but Giant-Man serves on teams. So, a Giant-Man series starring 4 different size-changing behemoths stands out. Add in a connection to the hottest Marvel Event since Secret wars, and you catch people’s eyes.

Putting it simply and avoiding spoilers for the main line War of the Realms, Freya tasks the four size changing heroes to strike the Frost Giants deep in their base on Midgard. How deep? The Giant-Men go undercover, painting themselves blue and growing the Frost Giant size. A bold plan for four heroes who lose the main advantage in a fight when everyone stands 65 feet tall.

Scott Lang, aka Ant-Man, “leads” the team as the most experienced hero and a somewhat successful criminal. His daughter was staying, before the invasion, in the area the frost giants have now claimed. Scott and Freya agree that after the mission, Freya finds Cassie for Scott.

Raz Malhotra, aka Giant-Man, fought in the resistance during the Secret Empire event and assists other teams like the Ultimates from time to time. He ranks high in the Marvel genius lists, and Scott worked with him awhile back.

Tom Foster, aka Goliath, stands shorter than the others, at 25 feet grown. He is the nephew of the original Goliath, who died at the hands of the Thor clone Ragnorak in the Civil War. He takes this mission very seriously and carries no patience for shenanigans.

The final Giant-Man is Thunderbolts cofounder, Erik Josten, aka Atlas. Unlike the other Giant-men, Atlas suffered to get his powers, experimented on by an evil scientist. Erik carries the baggage of being known first for being a criminal, unlike Scott who stole his powers but has served often on the more respected Avengers team.

Leah Thompson wastes no time in giving each hero their own voice and motives. Mostly through dialogue, Leah paints each character as a separate complex person with their own personalities. I look forward to watching these heroes converse more as they spend more time together and peel away their armors. I loved their interactions, and if the story consisted of them walking around, talking, I would not complain. The art suits the tone of the story. The faces remain emotive through the story. The patchiness of the disguises amuses me to no end, because I can’t see most of the team being able to do this right. Castiello clearly understands these characters well. The colors by Rosenberg are bright but wintery, making the scenes look like beautiful December mornings. I loved it.

Verdict: Buy! This comic perfects the tie-in event book by being a brilliant concept that could only occur during this event. Instead of feeling forced, it feels perfect, and I want a War of the Realms MCU phase just to get a Giant-Man movie.