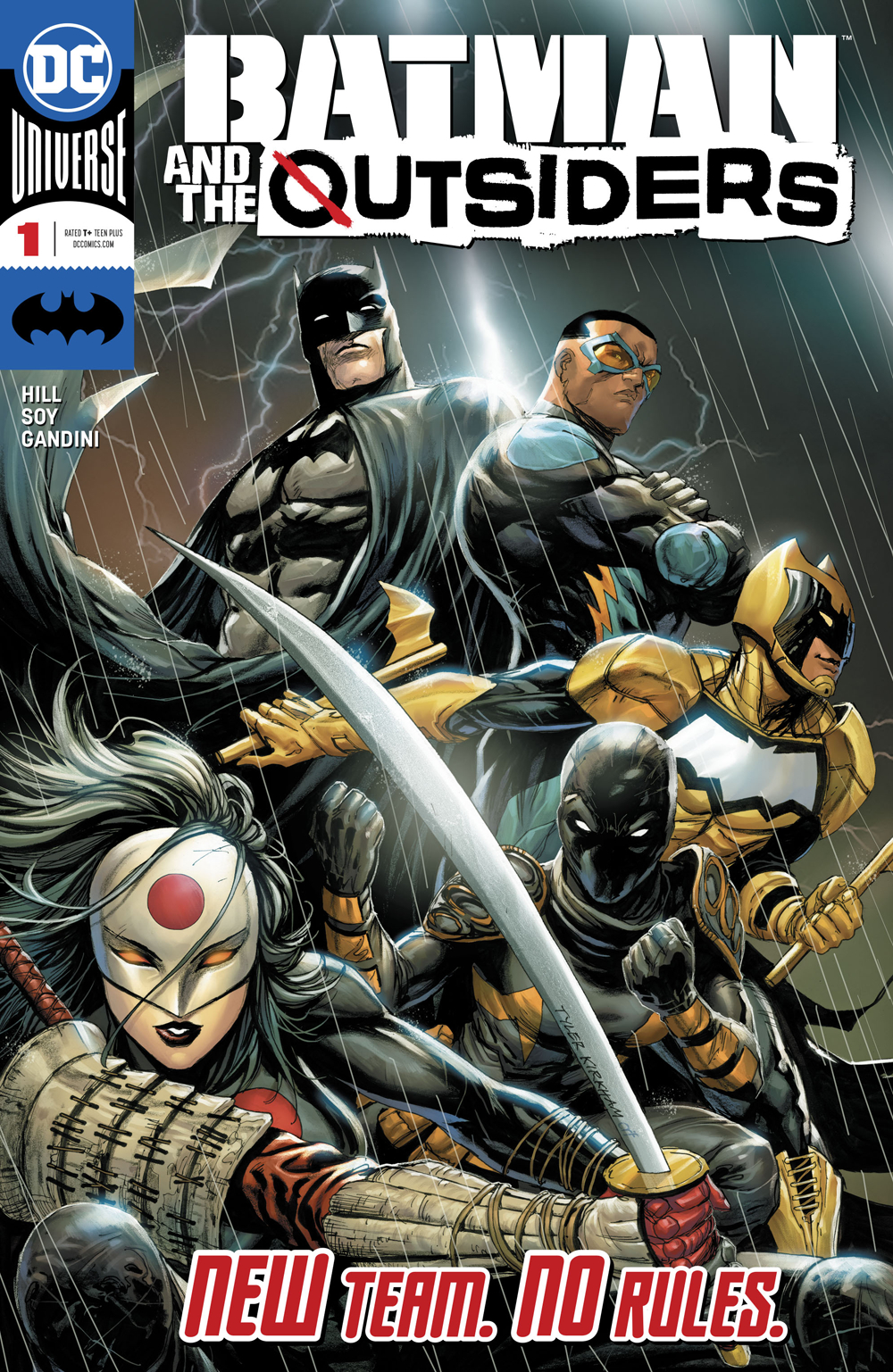 Batman and the Outsiders #1

After existing as basically background noise since the New 52 reboot, the Outsiders team returns to the shelves with its own series. After the fall of the Bat Family in Detective Comics, Batman no longer possess a team to handle certain situations of sensitivity. Batman recently worked with Black Lightning following the fall of the Bat Family. He tasks him with leading an Outsiders team to fill the vacuum. Black Lightning served on the Outsiders team as recently as after Batman’s death in Final Crisis. Batman chooses another Outsider alum, Katana, the wielder of a sword containing the whispering souls of the dead.

The other two members are former Batman family members. Signal, aka Duke Thomas, joined Batman after his parents were jokerized in the Endgame arc. Duke fought in the We are Robin movement first, leading a team of civilian Robins, while Commissioner James Gordon was Batman. Once Bruce returned from his amnesiac leave, Duke trained with him. He refused to take the mantle of Robin as a sidekick though. Instead, Batman trains him to be something else entirely, Signal, a more independent hero. During Metal, Duke learns from Joker that he possesses metahuman abilities, such as manipulating light in his eyes for better sight and being able to see the recent history of an area from the light. He also possesses basic precognition and possible immortality. Duke is still learning the scope of his powers.

Orphan, aka Cassandra Cain, rounds out the team. She reigns as the best living martial artist in the DCU, beating out Batman and Lady Shiva. Raised as a mute, she only recently began to learn speech. She reads body language the way we read words, allowing her to anticipate her opponents moves. The fall of the Bat Family and the loss the family sustained especially hurt Cassie, who believes one of her close teammates died.

The team, smaller than I anticipated, draws from many underutilized teams. After the sudden suspension shortly before it was supposed to first drop earlier this year, there was some wonder if the series would see the light of day. Thankfully, it did. The ragtag team of B and C Listers allows for fans of the heroes who can’t hold a series (or at least DC thinks can’t hold a series) to get some page time. As a fan of Orphan, I was thrilled to see the character find a place where she can shine.

The writing calls back to the comics of the 90s with lines like “They don’t trust you. And why should they?” being said by the narrator. The art sits very neatly, though, with the modern DC house style. You could tell it’s a Batman story without seeing any of the characters by the art. And that’s in no way an insult. The colors, while fitting in with the expected color scheme for Batman, occasionally contrast with bright images like truly electric scenes of Black Lightning.

Verdict: Buy! While there are many Batman titles out, always, this title feels like it fills the hole left by the Detective Comics Bat Family. If you love Bat Family/Team books as much as I do, the book is a worthy addition to your pull list.