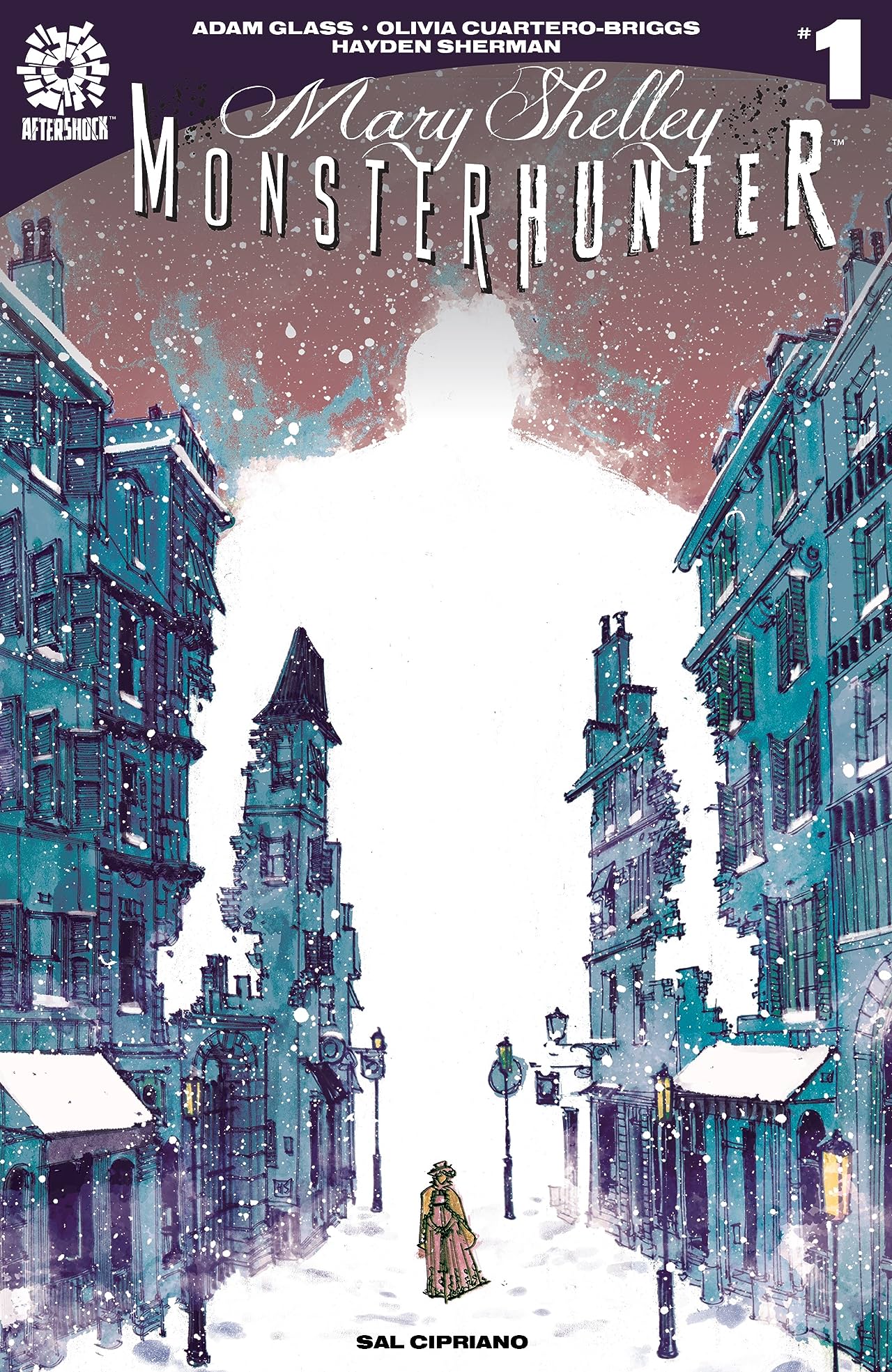 Art and Cover by Hayden Sherman

From Pride and Prejudice and Zombies to Penny Dreadful, re-imaginings of gothic horror pop-up all-over pop culture. I personally love it. Nothing like a gothic horror story, particularly late at night with a nice beverage. The timeless style elevates it above many other horror subgenres. Mary Shelley: Monster Hunter #1, the new comic from Aftershock Comics, tries to capitalize on this by going all in.

The comic starts with a guided tour of Mary Shelley’s old residence. `The guide states that, due to the time between the publishing of her seminal work, Frankenstein, and when it was said to be written, there may be a missing manuscript. Cue the tourist stepping through a plank in the floor. When the guide investigates the broken plank later, they find a manuscript, detailing the time Mary wrote her tale of a Modern Prometheus. Mary and her fiancé, Percy, were evicted by their landlord, and they are offered residence in a nearby castle for the winter. The story is similar to the standard urban legend of a horror story contest with one slight change: they are staying in the castle of Dr. Victoria Frankenstein. Eventually, the pregnant Mary investigates the locked room where screams emanate from and blood trails lead to. I enjoyed the writing immensely. The writers clearly know the story of Mary Shelley, and besides the fact that Dr. Frankenstein is a real person in this comic, the story stays pretty true to fact and lore. If this was the reader’s first real introduction to the story of Mary Shelley, they could do a lot worse. The story captures the scandal of their personal drama and the main characters banishment from some corners of “decent” society. The characters speak in a way that reads true to who you would imagine the writers to be. The bravery of Mary Shelley in particular rang true.

For me, the weakest link was the art style. While Hayden Sherman’s art aims for and captures a certain style, the style leaves me unaffected. I mean this as no insult to Sherman’s ability, I just don’t enjoy the style, which calls back to older styles and in many ways suits the gothic tone; I simply prefer modern sensibilities, including bright colors and detailed faces. It shouldn’t be held against the comic, though, and if the art is more your cup of tea, you may enjoy it thoroughly.

Verdict: Buy! I fell right into this Gothic retelling of one of the greatest horror novels ever written. Though I knew much of the lore of the conception of Frankenstein, it was written with careful detail and obvious enthusiasm, that I was never bored. I look forward to seeing what the team does with the classic yarn.