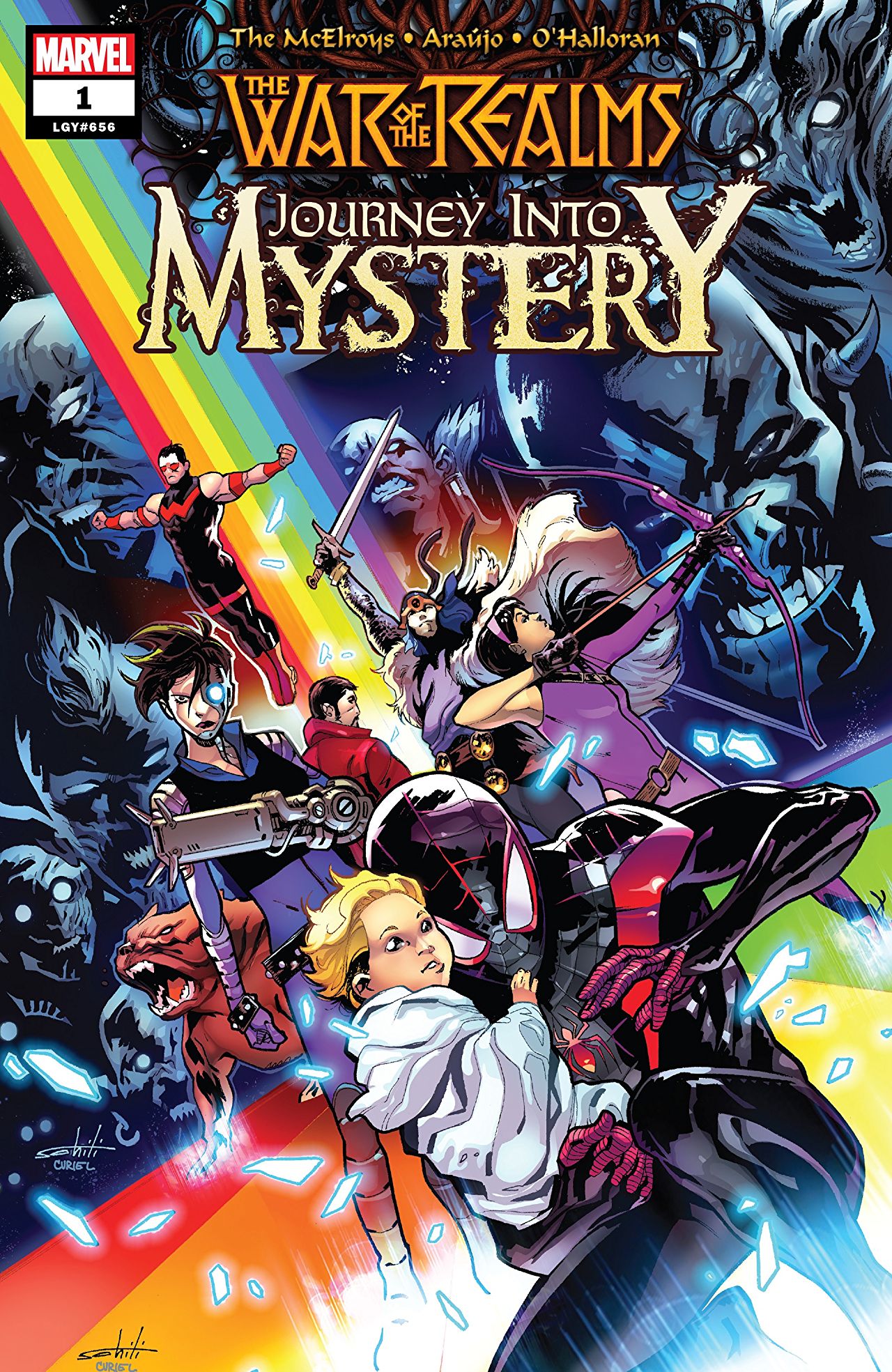 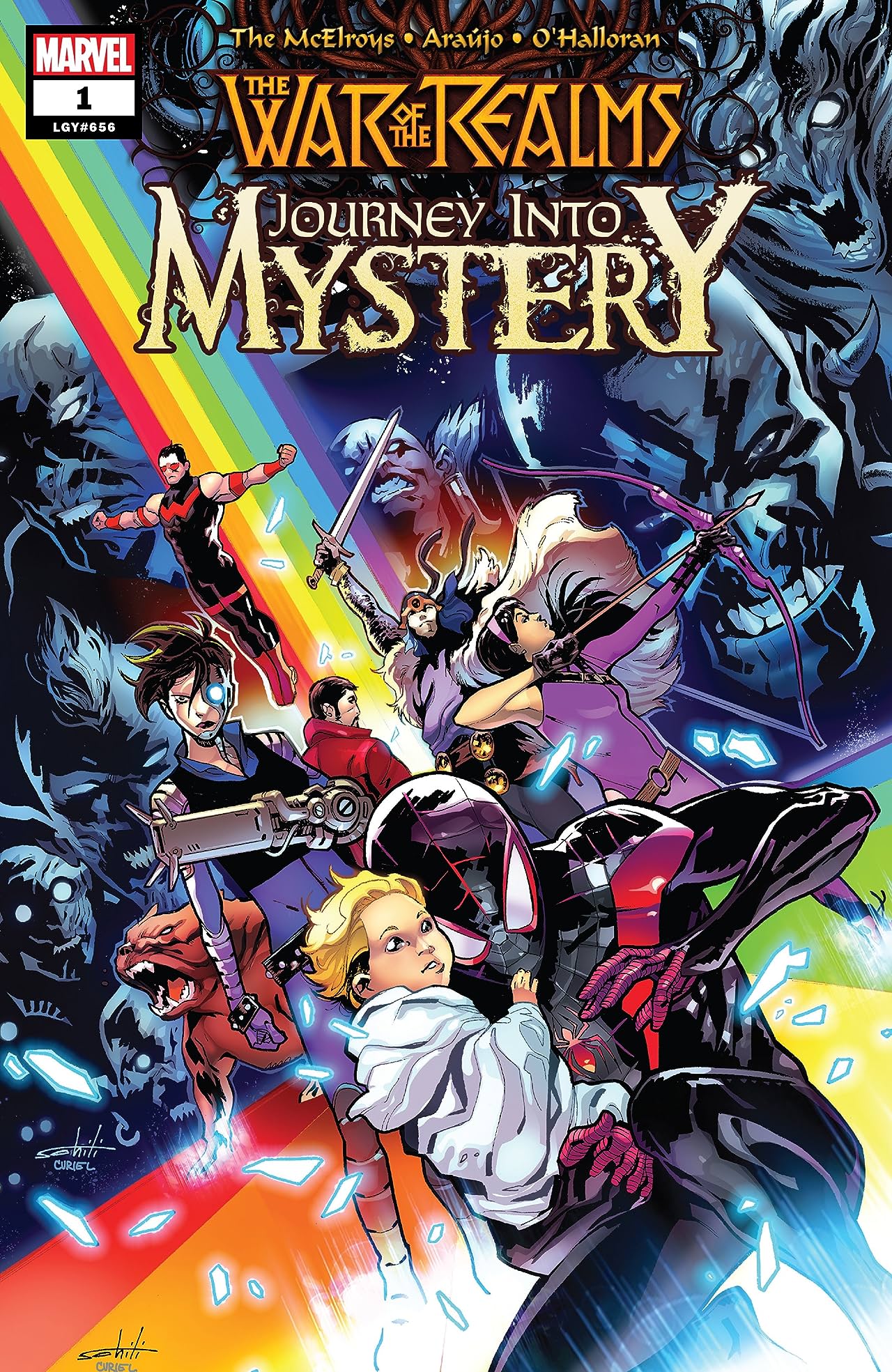 War of the Realms: Journey into Mystery Review
Written by Clint, Griffin, Justin, and Travis McElroy
Art by Andre Lima Araujo
Cover by Valerio Schiti
Review by KrisK
After 6 years of hiatus, the title of Journey Into Mystery returns to comic book shelves. While this book historically follows Thor, he occupies his own eponymous title. Instead, the heroes of this book represent the next generation of some of the most popular heroes of yesteryear. (Yes, I yesteryeared, no shame).

Balder, brother of Thor, returned from the dead a few months ago in the main Thor title. To his utter amazement, Balder learned Freyja, his mother, conceived another child with Odin. A beautiful baby girl who Balder has sworn himself to protect. With Malekith commanding armies of trolls, fire goblins, war angels, and a myriad of giants in New York, Freyja commands Balder to protect his sister. The Queen of Cinders tells them that she has sent someone to kill the baby Asgardian, Laussa Odinsdotter.  Thori, Thor’s “Most Awesome Dog Ever”, tags along for murdering. He talks and loves killing things. While looking for a way to get to his sister fast, he runs into Miles Morales, who he mistakes for Peter Parker. Miles joins the team out of  civic duty and awe of Thori.

After catching a ride from Roz Solomon, a S.H.E.I.L.D Agent with a flying car, the heroes run into the silent Norn, Skulld, who without his sisters, has trouble interrupting his visions. There Balder is told to succeed, he must create a team with The Man of Spiders, Dog of Gods, the Brave Archer Who Never Misses, He Who Would Be Sorcerer Supreme, The Half-Machine Warrior, and The One of Wonders.

The rest of the issues shows the band getting together and ends with revealing who the special someone is chasing them. While I won’t say it who it is, in a war of gods and monsters, he is quite suitable. The comic keeps a tight pace, though it is a standard getting-the-band-together issue, and it doesn’t feel like the reader is being force fed exposition and set up. While you can kind of tell the McElroys are new to comic book writing, they make up for it with a deep love of the comics. They dug some of the characters from deep in the vault, and I appreciate seeing their return and use. They write Kate Bishop especially well.

The art feels a little amateurish unfortunately. The depiction of characters, particularly faces, change page to page, in a way that pulls the reader out a bit. Once Araujo gets more used to the characters, or gets some models, these mistakes will stop.

Verdict: Buy! The McElroys find their legs as comic book writers in this Marvel miniseries spinning out of Journey into Mystery. The team is unexpected, but the brothers McElroy use this as an opportunity to play with the toys how they want, and, just like with their RPG podcast, its fun to watch them play.