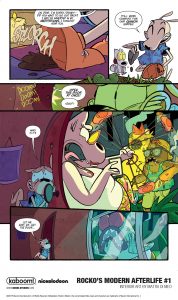 If you have ever watched Rocko’s modern life you will understand the irreverent humour and fun of the series. This comic feels like a great cartoon episode condensed into comic form, it has some social commentary, but it never gets too serious using it to make tongue-in-cheek comments or allusions to everything from millennials to streaming video games. These jokes are interweaved into the characters and the stories such that they do not feel ham-fisted but just a humorous addition.

The basic premise of this comic is one much explored, zombies in an already existing universe, this one just so happens to be Rockos. Rocko finds himself thanks to his friend’s attempt at helping him, having to fend off the undead who happens to include his ex-boss. This occurs only after Rocko talks to his friend Heffer about streaming, food delivery and how Heffer should really check on his parents in a zombie apocalypse. The comic ends showing a definitive direction for this miniseries and look to involve more fun-filled whimsical adventures.

The illustrations and colours by de Meo and Segela do a great job of evoking Rocko’s style of cartoon to a static medium with the illustrations still having a sense of motion. They capture the light-hearted tone at the same time conveying well the emotions of the characters which is difficult for anthropomorphous animals. The creative team have clearly put a lot of love and heart into this comic and it shows, making you want to just read more of the fun.

Verdict: Check it out. If you want a more comical zombie tale or have seen and enjoyed Rocko’s modern life before, or just to have a light-hearted book to laugh with; this is the book for you.