I’m not a comic fan that gets caught up on anniversaries or specific numbering. A few years ago when Marvel began their constant relaunch of series with new #1’s, or new volumes, or new seasons as they advertised it my one gripe was the loss of momentum and even as it was billed as a jumping on point it also served as a jumping off point. I remember being annoyed when Hawkeye had two #1’s in the same year and then again when everything was All New then All New All New. Throughout this Marvel trend DC was pretty good about staying with their original numbering and then they decided to try their New 52 and the reboot of their entire universe and start over with 52 different #1’s. I wasn’t a fan of the New 52 and even though I don’t get caught up on numbering I do remember a sense of sadness that Action Comics and Detective Comics, both long running series and vital to the birth of what DC comics is today, would not reach their historic 1000 issues. Both series were only a few years away from this historic occasion but it looked like it wouldn’t be. Then Rebirth happened and the powers that be at DC saw they error in their way and restored Action and Detective to their historic numbering and last year we were treated to Action Comics #1000 and this week Detective Comics #1000 was released and it was well worth the 999 issue wait. 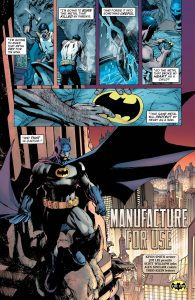 Detective Comics #1000 is an impressive collection of talent with both veteran and modern comic creators and rightfully so includes many talented writers and artists that had a large impact on Batman over the years or Batman has a large impact on their careers. Detective Comics #1000 is a collection of short stories that runs the gamut of topics and time periods which together touches on just about every corner of the Batman universe. Amazingly there was not one short story that I did not like. Usually with a massive comic, and this is a massive comic, full of different storytellers there’s usually a story or two that doesn’t click with me. Not so with Detective Comics #1000. Of course, there were stories I was more partial to then others. My favorite story was The Legend of Knute Brody by Paul Dini and Dustin Nguyen which tells the tale of the most incompetent henchman to ever grace the Gotham underworld, and mysteriously a henchman that every villain in Batman’s Rogues Gallery are sure that they either killed or died in their service, but they can’t all be correct can they? Warren Ellis and Becky Cloonan tell a dark story of Batman taking on an armed militia, and the dialogue is from Batman’s point of view and it is wonderful. Brian Michael Bendis and Alex Maleev, both new to DC, have a stellar story set in the near and far future that not only expands on the character of the Penguin but shows that Bruce Wayne is a bastard even as an old man. Recent Detective Comic’s writer James Tynion IV returns to the title to give the reader an amazing insight into Bruce and Alfred’s discussion of including Dick Grayson in their mission and the ramifications it will have when other vigilantes will eventually follow suit. Tom King, Tony Daniel, and Joelle Jones offer a story that shows the lengths that Batman will go to just to get a family photo while Kevin Smith and Jim Lee touch on Batman’s beginnings and the gun that robbed Bruce of a happy life. It’s amazing how many quality stories are in this issue and the amazing talent that DC collected for this impressive anniversary issue. 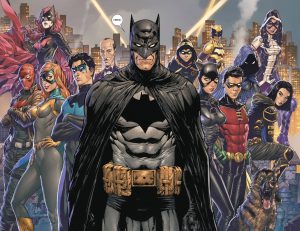 Even Batman needs a Family Photo

DC went above and beyond with this historic celebration in the publishing of Batman. There’s a story for everyone and each one is impressive in their own rights. I was overjoyed to see a new story by Dennis O’Neil, a man who was crucial to the modern dark and gritty interpretation of Batman. Neil Adams brings his classic pencils to a story, as does Kelly Jones who in the ‘90s along with the late Norm Breyfogle were the breakout Batman artists of note. I enjoyed every bit of Detective Comics #1000 as will any fan of Batman. Some may dislike the multitude of variant covers but really there is a cover for everyone and from every era of the Dark Knight. DC also made a sound decision to not connect this issue to the ongoing tale that Peter Tomasi and Doug Mahnke have been telling over the last few issues. There is a tale by these two that sets up what is to come in Detective Comics but it can easily be enjoyed without knowing any back story and it’s engaging enough it just may get some new readers to stick around for Detective Comics #1001.

Verdict: Buy! Find the cover for you and settle in for an epic collection of incredible storytelling that will satisfy the reader and remind everyone why Batman is an absolutely legendary character.