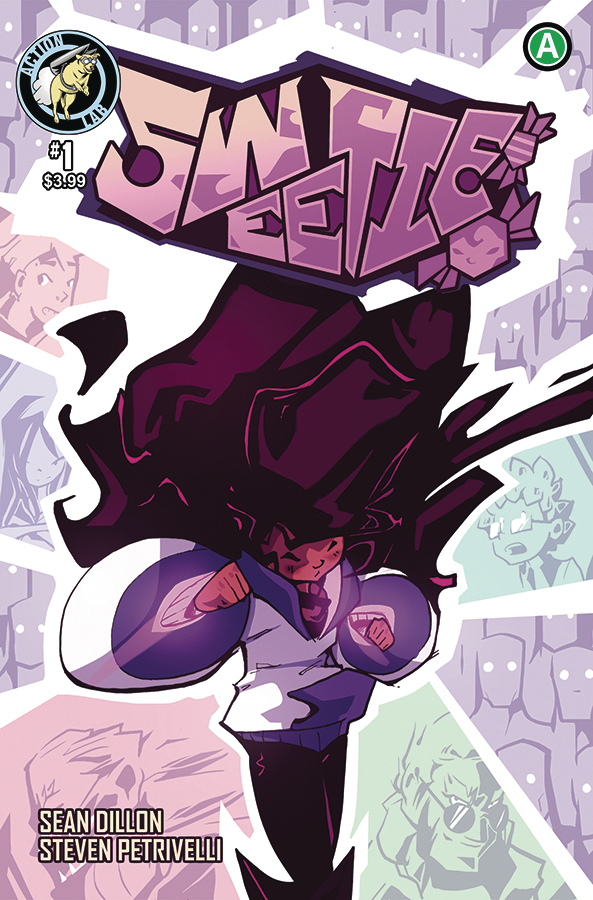 Art and Story by Sean Dillion

Sweetie stands out in a comic book store full of hundreds of books. Part Kungfu Superhero, part fangirl, the book takes a genre often best for adults and makes it its own by ditching the blood and death that normally go with hostage situations and video game style boss battles.

Sweetie starts with the eponymous Sweetie practicing a triple flip drop kick she sees on TV. She fails, bonking her head on the floor. Her parents rush in. Her father horrified at the idea of her hurting herself tries to forbid Sweetie from continuing this behavior, but her mother approaches the situation with more understanding. Instead of attempting to quash the behavior, she merely mandates a simple rule: use a mattress. They get a mattress, and Sweetie practices the triple flip drop kick again and again , failing every time. She continues without any trepidation, even as she gathers injuries like a squirrel gathers nuts.

Interspersed through this story are snippets of the current day, years later. A hostage situation unfolds at the mall, and Sweetie is on the scene, picking up a respectable stack of comics. She stealthily takes out the henchmen, before finally facing the 2nd in command in an epic martial arts battle.

Having been able to preview the story going forward, I will say there seems to be more than meets the eye with this story, and I am very much intrigued about what direction its going. The writing flowed naturally, and you can tell that the writers have enjoyed a few martial arts movies in their life. I love the all ages approach to the Kung Fu story; I enjoy the grittier, more visceral comics on the shelf, but this book made me feel like I was reading a modern-day power rangers story with way better dialogue. It was pure fun, start to finish, and Sweetie is the most lovable martial arts fighter since Jackie Chan.

The art pops on every page. The comic sports a hefty amount of purple/white color juxtapositions that feel fresh in a book like this. The action unfolds organically, and every scene feels stylized. I would love this comic to be adapted into an animated TV Show or movie similar in style to Spiderverse, though obviously with its own sensibilities.

Verdict: Buy! Now. This book is perfect for kids and adults, boys and girls. It suits everybody, by not feeling like it was made for anyone but the writers. Action Lab delivers again.