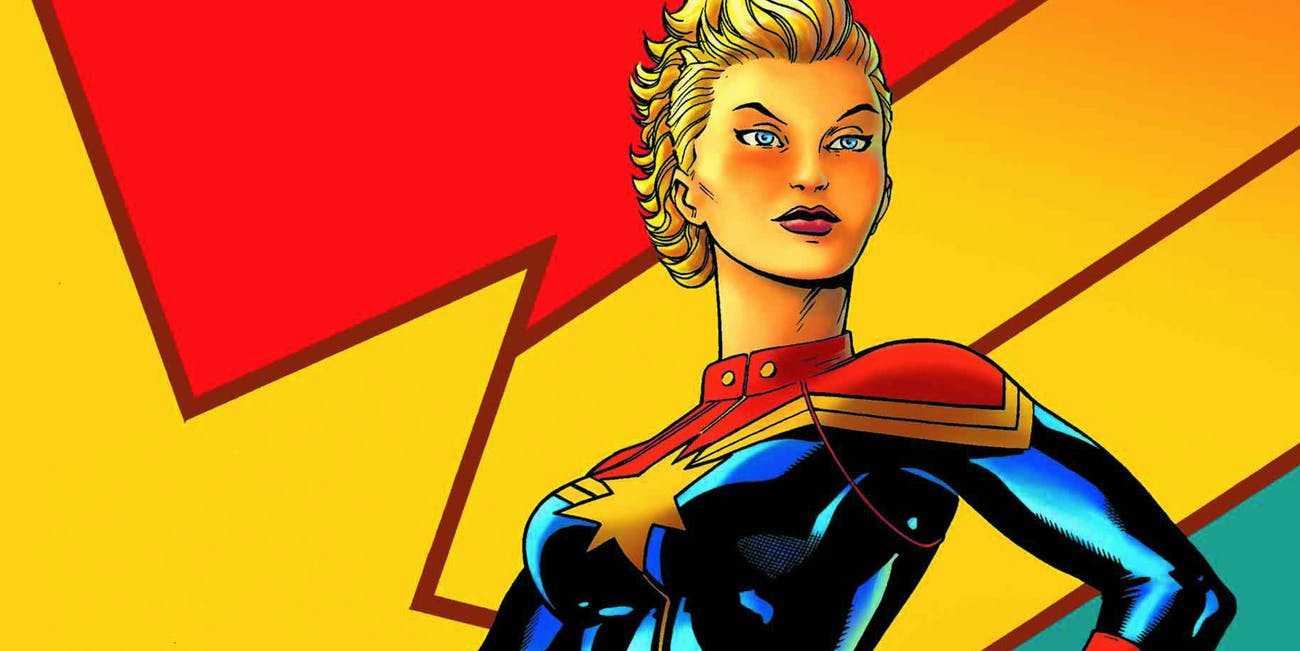 The ‘80s were an interesting time in comics. In many ways it is my favorite time in comics. The second and third generation comic creator were at their zenith and the comic shelves were bursting with amazing comic books. I was a Marvel junkie and consumed almost everything that the House of Ideas put out and it was an amazing period to be a young comic collector. I look fondly on those times and while I personally look fondly upon this time period one character who might not would be Carol Danvers. Carol was noticeably absent from the Marvel Universe after she was transformed into Binary by the Brood, an alien race who was a principal antagonist of the X-Men. Early in the ‘80s Carol Danvers drifted into obscurity, appearing sporadically throughout Chris Claremont’s mutant corner of the Marvel Universe (Uncanny X-Men, New Mutants, and Excalibur) but other than that there was very little Carol in comics. Marvel wasn’t without a Captain Marvel, Monica Rambeau, a hero with light-based powers was created by Roger Stern and became a mainstay during his tenure on the Avengers. She had no connection to the first Captain Marvel (Mar-Vell) but allowed Marvel to maintain the copyright to the name. I was never a huge fan of Monica Rambeau, I didn’t dislike her, but she never felt like a Captain Marvel to me. But the Stern run on the Avengers is one of my all-time favorite’s periods for the book and she was an integral part of this time so I read almost all of her adventures. But I missed Carol, I missed Ms. Marvel or Binary as she had come to be known.

Carol returned in the ‘90s but it might have been better for her to stay in obscurity, as this decade would continue much of the misogyny that affected the character in the late ‘70s and early ‘80s. For more on this read my previous piece on Captain Marvel here. Binary was a principle player in Operation: Galactic Storm, which was a forgettable Avengers crossover that was a loose sequel to the classic Kree-Skrull War, yet this crossover dealt with a Kree-Shi’ar War that saw the Shi’ar Empire annex the remnants of the Kree Empire. Carol as Binary was a part of the Avengers contingent that was wrapped up in the war and at the end of the war Carol had lost her Binary powers and returned to her Ms. Marvel powerset but rather than return to the name Ms. Marvel she instead took on a very ‘90s name- Warbird. As Warbird Carol was folded back into the Avengers title with the famed run of Kurt Busiek and George Perez during the Heroes Return relaunch. This Avengers title was a breath of fresh air off of what had been a down few years for the title with the lauded leather jacket era and then the maligned Heroes Reborn experiment, first under Rob Liefeld and then wrapped up by Jim Lee’s Wildstorm Studios. I loved much of this relaunch since the Avengers finally felt like the Avengers again. What I did not love was the treatment Busiek had for Carol, a treatment that would haunt the character for years.

Carol has always been a passionate character, it’s one of her most endearing qualities but Busiek’s take on this only exacerbated the perception that she was reckless and careless then sadly linked these behaviors to alcoholism and turned Carol into a drunk. I found this insulting to the character and everything she stood for when she first appeared on the comic shelves and spinner racks as Ms. Marvel. It was just another continuation of the destruction of a feminist icon by making her a sloppy drunk. Sadly Busiek used this gimmick in the atrocious Live Kree or Die, where Carol’s now drunken behavior not only embarrasses herself but also the Avengers. She is soon court martialed and resigns from the team before they could expel her. Carol then is characterized as a dysfunctional alcoholic, maybe most insultingly by Erik Larsen and Jeff Matusda who could not seem to act quick enough to put Carol in hardly any clothes and have her falling over drunk while out with Logan and then use her powers in a negligent manner in Wolverine #133. It was a terrible character arc but sadly one that mired Carol for the remainder of the decade. Busiek does bring Carol back into the Avengers and sees her strive for sobriety and even tries to fix Avengers #200 by bringing back Marcus and allowing Carol to reject him during the Kang Dynasty(Avengers #41-55 and Avengers Annual 2001) storyline. The Kang Dynasty is an incredible and ambitious storyline that took a year and a half to tell but it really didn’t help to redeem Carol and it only reminded me of the harm and character assassination that Carol had gone through for almost twenty years at this point. Sadly it would be another decade of decline.

Avengers morphed into the New Avengers under Brian Michael Bendis and Carol was not part of the new iteration of Earth’s Mightiest Heroes. She did appear in the House of M, which would be the first time that she used the moniker Captain Marvel. Bendis’ use of Carol was great and she truly felt like the hero she was meant to be. I loved House of M and I also loved that Carol was finally Captain Marvel, a name that she should have had since Mar-Vell’s passing. Instead the title had been used by Monica Rambaeu and by the time of House of M the holder of the title was Mar-Vell’s son Genis-Vell who had appeared in Avengers Forever (one of the greatest Avengers stories ever printed) and then transitioned into his own series written by Peter David. David’s Captain Marvel was an enjoyable book and since it was always on the verge of cancellation David was allowed a lot of freedom to save the title and he ran with this freedom. It really tapped into the history of Captain Marvel and even brought in the nega-bands and Rick Jones bonding with Genis-Vell. Carol had no connection to this series and it ended in 2004. In the wake of House of M Carol returned to her Ms. Marvel identity and I was excited when I heard there would be a new Ms. Marvel series, this time written by Brian Reed. Sadly again my excitement was unfounded.

Brian Reed’s Ms. Marvelsuffered from many errors, some external but many were internal. The external was the fact that the series was continually roped into Marvel’s cycle of events during this time period. Beginning with House of M, then there was Civil War, then Secret Invasion, the prolonged Dark Reign era and then concluding with Siege. Reed was seemingly mandated to include his series into each of these events since Brian Michael Bendis, the architect of this era, made Carol a principal player as he made her the leader of his Mighty Avengers team and then brought her into his New Avengers title as the team dealt with the fallout of Secret Invasion and Norman Osborn becoming the chief law enforcement officer of the Marvel Universe and the team was on the run. While I enjoyed this era and these Avengers series and events (I’m an unapologetic Bendis fan) but it shoehorned Reed into these stories and he did not use them to his advantage. Reed played up many of the flaws that had been forced upon Carol over the years. Carol was given command of a SHIELD unit and she was portrayed as a clumsy boss, almost a ditzy blonde stereotype, rather than the stellar Air Force Veteran that she actually was. She bounced from relationship to relationship as if it was a bad TV sitcom and Reed never really found Carol’s voice or the core of her character. The real travesty of this volume of Ms. Marvel was the art. To call it suggestive would be nice. Any chance the artists on the book got to draw Carol in her underwear, which was always as skimpy as could be, they did so. Carol’s classic black costume suddenly became a thong and incredibly thin in her nether regions. Carol’s breasts were amplified and she was posed in incredibly uncomfortable suggestive poses to showcase her figure. It was insulting for a Marvel’s feminist icon to be drawn in this manner. I’m aware that there is a level of sexuality to super heroics and super heroic comics, that men and women are often perfect specimens of the human body but you can be sexy and tasteful at the same time. This volume of Ms. Marvel did neither but somehow it survived for fifty issues but mercifully ended with issue #50 at the end of the Dark Reign storyline where the villain Moonstone was acting as the new Ms. Marvel in her classic red and black costume for Norman Osbourne’s Dark Avengers. The series ended with Carol reclaiming her name but she would soon give it up for good as Carol finally took on the mantle of Captain Marvel and would return to the hero she was  always meant to be.

The Captain Marvel that the world sees today, and will soon enter the MCU owes its existence to Kelly Sue DeConnik and her Captain Marvel relaunch of 2012. Kelly Sue crafted a hero who was a leader, both strong and confident but with human vulnerabilities. Gone was the skimpy outfit from Reed’s Ms. Marvel and in came the now iconic flight suit that integrated classic Captain Marvel imagery but was completely original to Carol as Captain Marvel. Kelly Sue’s Captain Marvel is everything I wanted Captain Marvel to be, it’s Carol done right with all the baggage attached to her thrown out. Yes Carol had flaws, but they were human flaws that everyone deals with, but it didn’t degrade the character. Rather DeConnik was able to write Carol as a very human character who happened to be one of the most powerful heroes of the Marvel Universe. Quite possibly the greatest thing that Kelly Sue DeConnik did for Carol was make her book fun. The early issues had everything you wanted in a Captain Marvel book. There was action, adventure, time travel, witty dialogue, a sense of importance, and the beginning of a family that Carol finally surrounded herself with. DeConnik built up one of the best supporting casts in comics history and made me care for the people who cared for Carol. Carol also became a role model, first to Lieutenant Trouble AKA Kit Kenner who is the biggest Captain Marvel fan but maybe more importantly Kamala Khan, who took over the moniker Ms. Marvel out of respect to Carol, who approved of the passing of the name. Kamala may be the better-known Ms. Marvel today, deservingly so, but she would not be who she is without Carol to inspire her.

Since DeConnik took on Carol she has become, rightfully so, a vital cog of the Marvel Universe. Whether it was DeConnik, Bendis, or even Jonathon Hickman in his awesome Infinity event Carol has become a leader, a hero that others look to for guidance and carries an air of authority that others look too. It took some time for me to realize that Carol as Captain Marvel has finally become everything she was intended to be when Ms. Marvel first began back in 1977. DeConnik and the great writers that have followed have finally evolved Carol into Captain Marvel and with the release of Captain Marvel on March 8 I see no end of greatness in Carol’s future and this is just fine with me.