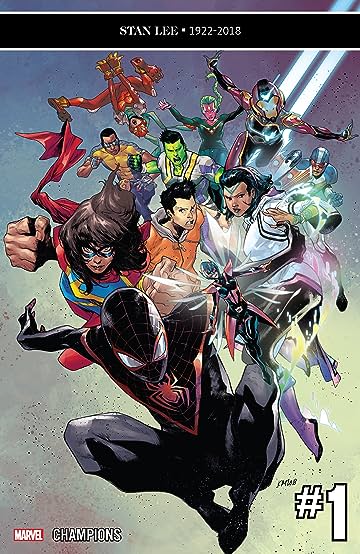 After the Second Civil War of the Superhumans, cynicism reigned supreme. The heroes we were supposed to look up to were fighting each other again. They were not making the world better, instead they were making it worse. The young heroes said, “No more!”.

And the Champions mantle resurrected in the form of the young legacy characters. Spider-Man: Miles Morales, Ms. Marvel, Young Cyclops, Nova, Viv Vision, and the Totally Awesome Hulk decided to do more than punch bad guys. They made a team to be more proactive and work at rebuilding after disasters. A team that stuck around and made a difference.

The team has gone through some changes since then, with Young Cyclops leaving the time line, and the group’s numbers expanding greatly. The team’s main roster consists primarily of the main founders, along with Ironheart, Snowguard, and Wasp. (Snowguard is a recent creation in Champions. She comes from Inuit heritage, and she uses the ancient Inua spirit, Sila. Sila’s blessing enables her to shapeshift and manipulate aurora.) Many other heroes serve as auxiliary members. The other members are too numerous to mention, and they come from cultures across the world. Jim Zub even pulls Bombshell from the Miles Morales comic. The huge scope and deep cut of some of the characters reminds me of Bendis’s glory days on the Avengers. I love seeing such a diverse and surprising team.

This issue follows the Champions as they launch three simultaneous missions in Mexico, Dubai, and Japan. Mexico’s mission involves taking out a slavery ring. Japan’s mission is saving civilians after a natural disaster.  Dubai, which you don’t really see, deals with taking out ZZZax as he assaults the small Middle Eastern country. The one panel you do see of it is confusing, and when the last page splashes into your face, you will wonder what went down.

The writing by Jim Zub is great. He picks up the run from Mark Waid beautifully, and I can’t wait to see where he goes with this book. The drama between members can be cut with a knife. I love the new interpersonal strife, and it exceeds anything I ever read in X-men or Avengers. The art in this book fits nicely into the Marvel Studio style. The faces are rendered in great, emotive detail. Finally, the color work pops. As a result of all this mastery, the art drives the book home as its own unique premier title.

Verdict: Buy! I thoroughly enjoyed this book. It was the perfect balance of fun and drama, and I can’t wait to see what Jim Zub has in store for these young heroes.