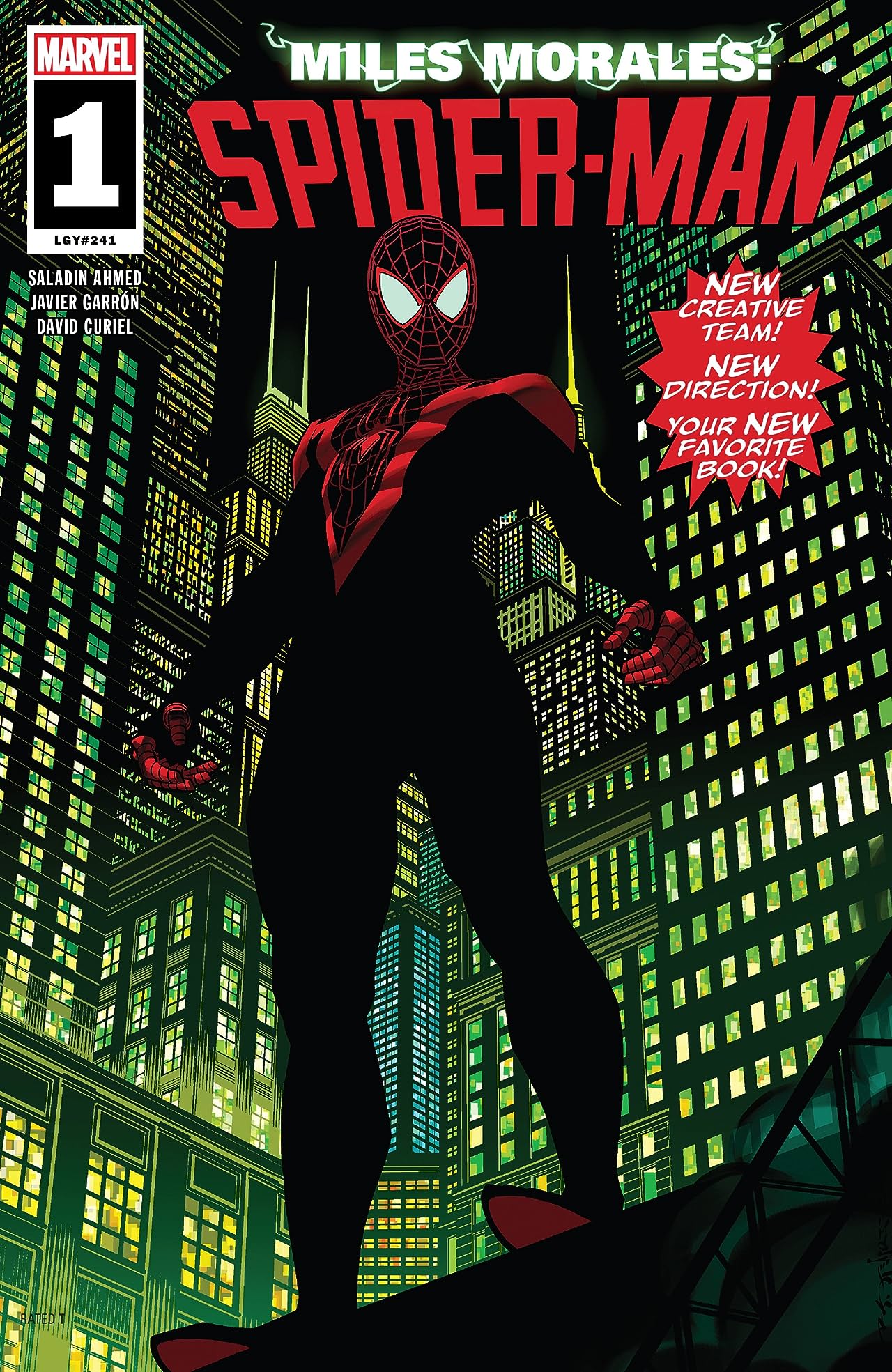 Just in time for the movie, Miles Morales returns to the Local Comic Book Store! When Brian Michael Bendis, the creator of Miles, announced his departure from Marvel, no one knew who would pick up the character. Nobody else had written him in a solo series. Marvel chose well with Saladin Ahmed (Black Bolt, Exiles).

If you aren’t familiar with the young Spider-Man, he originally existed in the Ultimate Universe. When Secret Wars occurred, and the other universes disappeared, Miles entered Earth-616, home of the mainstream Marvel universe. Miles lives with his father, Jefferson Davis, and his mother, Rio Morales. He attends a NY Charter School with his best friend Ganke Lee, who knows Miles’s secret. 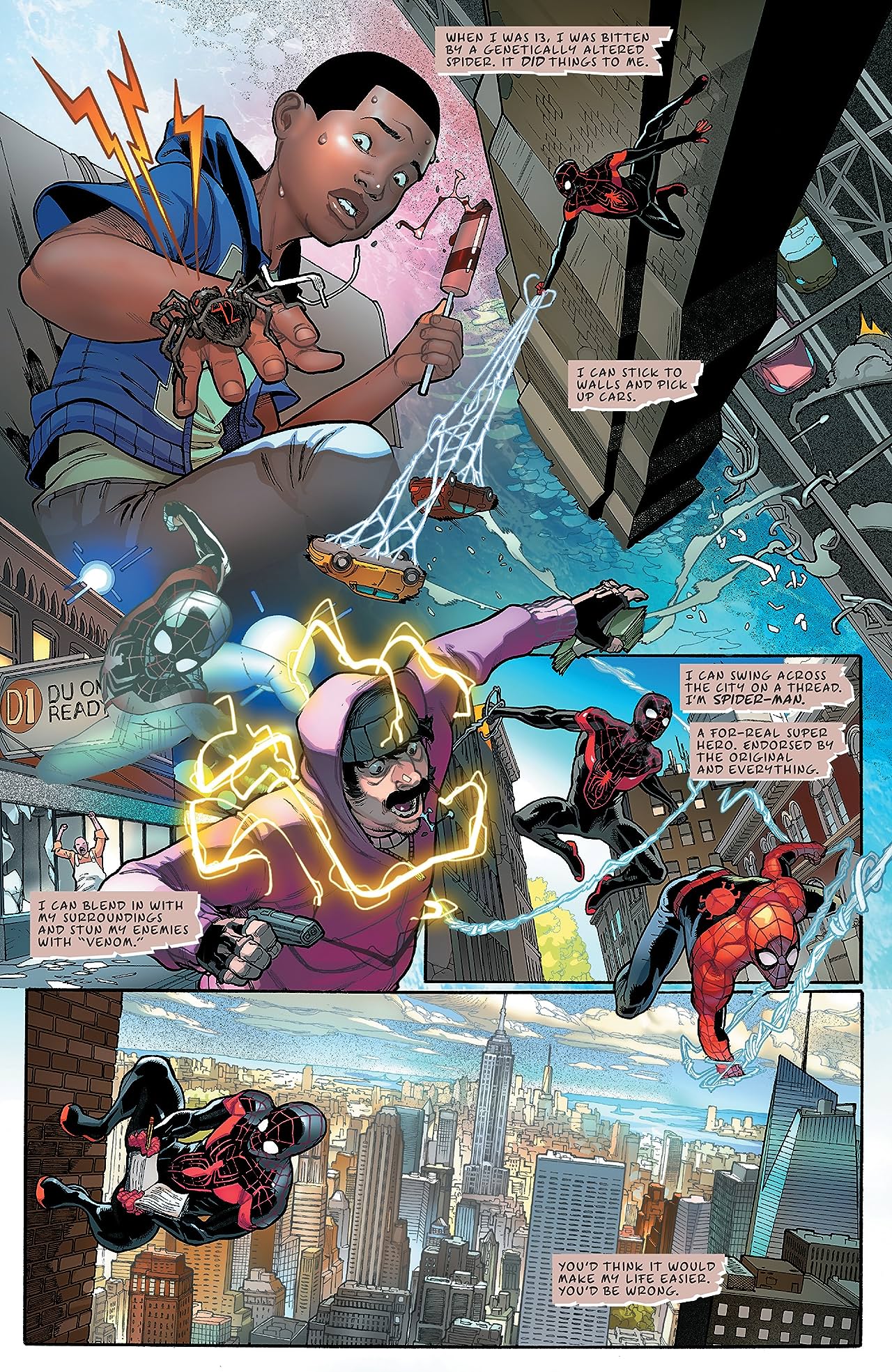 Miles gained his powers when his uncle, Aaron Davis a.k.a. the Prowler, accidentally brought a radioactive spider home with him after pulling a heist at Oscorp. (Radioactive Spiders really seem to have a preference for biting teenagers when imbuing super powers) Miles wields the same powers as Peter Parker, plus venom blasts like Spider-Woman and invisibility. He can use the bio-electricity from his venom blasts in a way similar to Peter Parker’s web fluid.

Story wise, Miles calls back to the early Peter Parker days with a modern spin. He makes mistakes, and guys like Hammerhead, who the older Spider-Man can beat in a minute, almost fatally destroy him. He learns though, and I would not be surprised to see an older Miles from the future who is more powerful than Peter Parker ever was.

This story does a sensational job of catching up the reader on everything going on in the life of Miles Morales. I worried the whole book played catch up, but Saladin still works in setting up a new story arc. While Miles patrols the streets of Brooklyn, he swings across a heist by figures in high tech suits. Before he can interfere, the Rhino shows up, but not for the reason you would expect.  Without giving up too much, it’s a story idea with a lot of potential for emotion and action. I love seeing the Rhino when he operates as more than a simple goon for hire. His stories with his wife Oksana, and the tragic ending of their marriage gave him so much depth. He also spent a day as a mall Santa so you know he can’t be all bad.

Young Gun Javier Garrón’s art and David Curiel’s colors fit the comic perfectly. Garrón does a magnificent job showing the emotion on the faces of his characters, even when they are masked. Miles swings by a line of needy families waiting for a hot meal, and a little girl looks up at him with great sadness. The look of confusion and guilt rendered on the masked vigilante is heartbreaking. Curiel colors the book delightfully, in a way that suits a Spider-Man comic, but with not as much blue and more black, matching the difference in the color schemes of the suits between the Spider-Men. Cory Petit letters flawlessly as ever.

Verdict: BUY!  After months of worrying about the future of Miles Morales, I know I can breathe easy with Saladin Ahmed as the pen. The cover promises this will be my new favorite book, and they might just deliver on that promise.