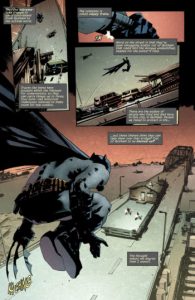 The Batman Who Laughs #1 is a creepy, horrific, and a somewhat disturbing comic and I would have expected nothing less from Scott Snyder and Jock. The Batman Who Laughs, a jokerized Bruce Wayne from the Dark Multiverse, was without a doubt the breakout villain from Dark Nights: Metal. A Bruce Wayne without morality, a man with Batman’s skillset without qualms of killing, a Batman who has destroyed world after world in the multiverse, and Batman who is now loose on the DC Universe. It’s Batman’s greatest fear, and a fear that The Batman Who Laughs six-issue mini-series will be dealing with.

The Batman Who Laughs #1 opens like many other Batman tales, a high speed chase around Gotham with Batman hot on the heels of the fleeing criminals. These criminals happen to be sneaking out bodies, in old Gotham Brownstones that are being moved for new apartments. It’s this car chase and the discoveries of the body being moved that paves the way for the remainder of the book. Batman becomes aware that the Batman Who Laughs is free and he’s not alone. Apparently a Batman with the morality of the Joker isn’t scary enough, as the Batman Who Laughs has brought with him from the Dark Multiverse a Batman who likes guns, lots and lots of guns. These two Batmen have it in for one person, Arkham’s favorite patient, the Joker. This puts Batman in a precarious position. Does he dare align himself with his most hated enemy to defeat his two dark doppelgangers? Why doesn’t he just let them kill the Joker, wouldn’t the world be a better place for it? But what happens if the Joker dies? It’s these questions that Batman must answer and what the Batman Who Laughs is all about, and I can’t wait to devour this series.

Scott Snyder is the current Batman scribe of note, yes Tom King is telling a tremendous story in Batman, but who Batman is today has everything to do with Scott Snyder and thankfully he can’t let go of the Dark Knight. His gritty and violent Batman is perfect for this story as is Jock’s artwork. His sketchy, dark, and aggressive artwork looks so good in the Batman Who Laughs #1. Jock can handle it all, from the high speed chase, to the over the top gun violence, and the bloody murders that litter the pages, every one of them looks incredible in this book. Dave Baron’s colors are moody and atmospheric, which really add to the overall quality of this comic and only amplify Jock’s already beautiful artwork. DC really outdid themselves when putting this mini-series together and thankfully we get five more issues.

Verdict: BUY the Batman Who Laughs #1! It is a violently disturbing comic that sets the stage for what has the potential to be an excellent mini-series. If this issue is any indication Scott Snyder and Jock have another hit on their hands.