The wait is over. The latest X-Men reboot is here with the release of Uncanny X-Men #1. Ever since Brian Michael Bendis wrecked havoc on the X-Men Marvel’s Mutants have been a bit listless. The previous X-Men outing, with the color schemes of Gold, Blue, and Red, never took off like Marvel had intended and it was the first time in a long time I wasn’t reading an X-Book. I must not have been the only one since earlier this year the House of Ideas started to make moves toward a line wide reboot. First there was the return of Jean Grey as the long absent founding member of the X-Men returned from her last death during the climactic conclusion of the Grant Morrison era. Then earlier this fall saw the release of the great Extermination, a mini-series with two intents, one to redefine the X-Men going forward and two return the original X-Men to their own timeline. The final move is the return of Uncanny X-Men, the flagship title most associated with Marvel’smerry mutants. 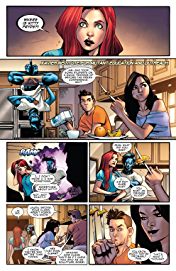 Uncanny X-Men #1 isan enormous issue that works very hard to restore the X-Men to grandeur the title is used to. The book does not take a huge departure from the color themed series that have been the core of the X-Universe the past few years. The X-Mansion is still in the middle of Central Park, Kitty Pryde is still the headmistress of the school, and of course the world still fears mutants. Yet the new writing team of Ed Brisson, Matthew Rosenberg, and Kelly Thompson are quick to make sure that their tenure will not be this collection of color schemed teams, but rather a mixture of classic X-Men tropes along with enough new takes that the issue doesn’t feel like a simple Chris Claremont rehash. The crux of Uncanny X-Men #1 is to create a new status quo. First and foremost is creating the core team, which is a large team that is very heavy on characters from the hey day of the X-Men, when they were the most popular franchise in all of comics. Joining these iconic characters are a solid collection of new X-Men, those created in more recent years but have quickly become fan favorites.  Uncanny X-Men #1 also introduces the conflict for at least the first arc if not longer, which is threefold. First the MLF (Mutant Liberation Front) from the early days of X-Force are back and targeting a pharmaceutical company that is close to a cure for being a mutant. Second is yet another politician, Senator Ashton Allen, using anti-mutant hysteria to make a name for themselves, and third is an army of Madrox’s as Jamie Madrox, the Multiple Man seems to have snapped as he is making no sense and not only attacking the enemies of the X-Men but the X-Men themselves. With so many questions and a great cliffhanger I’m glad that Uncanny X-Men is now a weekly book.

The Second half of this oversized issue are three short stories and an epilogue. Each of the stories focuses on core members of the team (Jean Grey & Bishop) as well as a few of the New X-Men (Armor & Anole). Each story is self contained but they are interconnected and culminates in a big throw down in the middle of Manhattan. Each short story is written by one of the new writers and each features a different artist. I would have preferred more from the main story but these short vignettes are entertaining and help to define these characters for new readers and redefine them for longtime fans.

Uncanny X-Men #1 is a nice first issue for this newest iteration of the flagship mutant comic. Choosing some of their new star writers for this reboot is genius for Marvel. Brisson, Rosenberg, and Thompson are obvious fans of the X-Men and weave enough nostalgia and history into their first issue but they don’t fall into the trap of simply rehashing stories from twenty years ago. I’ll be interested in seeing how this triumvirate of talent carves up the writing duties going forward, but I do know that no matter who is the lead writer for an issue I will not be disappointed. Longtime Marvel artist Mahmud Asrar’s artwork on Uncanny X-Men #1 is some of the best of his career. His clean and dynamic style lends itself perfectly to the story of the issue and I hope to see more his name on the credits page in the future.

Verdict: Uncanny X-Men #1is a nice first issue of the latest Marvel X-Franchise reboot. With a great mixture of old and new, a heavy sense of nostalgia but not so much it is stifling Uncanny X-Men #1 is a Buy for me.