I was lucky enough to catch up with British comics superstar Emma Vieceli at the MCM London, here’s what she had to say…

Thanks for taking the time to talk to me, it’s a very busy weekend. How engaged have you found people to be this weekend, because it has been incredibly busy here in Comics Village?

I’ve been coming to this show for twelve years now, so I’m an old hand at MCM, and actually I started the Comic Village, I invited ten friends along and we had a little space, ten tables.

Thank you, in that case!

You’re welcome! It grew into about 120, and then six years or so ago I passed it on to Gary who runs it now, so for me I’ve watched the show ebb and go through stages, this is the first one I’ve been to with the new management on it as well, and with any of these shows you have plusses and negatives to it, what I find fascinating with this show is that it’s a genuine reflection of whatever the big pop culture thing at the time is, and we can all sit in our little caves and on twitter and assume “oh everyone’s reading this comic right now”, and then you come here and you go “nope, that’s not at all what’s going on really”, and it’s a real insight into what people are big on right now. But yes, it’s such a positive place, because people feel safe here, you can be amongst thousands of friends because you know everyone’s got the same interests.

Honestly after spending about half an hour here I tweeted “comics people are the best people” because everyone is so friendly.

Because people feel comfortable because they’re being themselves, in a place where they know they can be themselves.  I’ve seen people, over the years, people who have come to my table as kids, so when I was first where with Manga Shakespeare, they’d be buying it because they were at school, and then a couple of years ago they come back to me and they’re now parents, and they’ve got babies, and I’ve been stood behind this table watching people grow up through the MCM, which is kind of fascinating!

So with the people that are here, are you finding people are crossing over fandoms, because there’s a huge Critical Role presence

I’ve never seen  Critical Role and I know I shouldn’t admit that, but I can now literally pick out characters just from having been here this weekend, so are you finding that those fans are crossing over and looking at other things as well?

Some, not all! I mean we’re all in the same Venn diagram on the face of it, so I mean Kit is actually a very old friend of mine and I sort of mentored them when they were, people like her and Fez (?) when they were first coming into the industry, and now she’s the official Critical Role artist, so this is very much her show, she’s rocking it this weekend. Some things cross over a lot more easily than others. Nothing on my table fits D and D, I mean I grew up with role-play, I’m very into D and D, but I don’t do comics about it, so for me this time maybe not so much crossover, but maybe someone like Kate Ashby and her Widdershins comic, which is very popular anyway, it also reads almost like a D and D story, so she’ll have people who’ve come here for Critical Role go “actually that comic looks quite like a D and D adventure, I can relate to that.” But that’s this event, we’ve had one before where Homestuck was the big thing, Steven Universe was the big thing, Rick and Morty was the big thing, and every time you do get a Venn diagram, people will shift over. For me, I think last event there was a much bigger LGBT emphasis, so I think like Breaks launched last year, so I had a really good show that time. It’s waves, it ebbs, it depends where the mentality is. 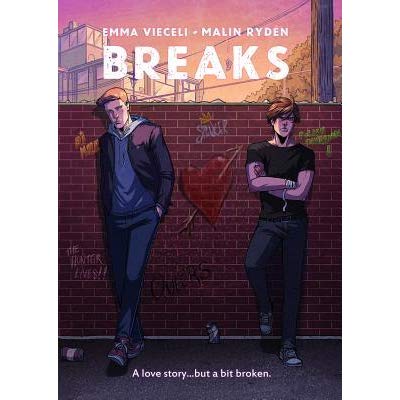 Let’s talk about Breaks, which is an original graphic novel that you produced, what’s the elevator pitch for it?

Ah, that’s always a tricky thing isn’t it? So I co-write it with my friend Malin, we wrote it originally as a novel and then I decided I wanted to turn it into a comic because there aren’t enough stories like this being told in comics – or at least there weren’t then, which is four years ago. If I was going to elevator pitch it I think the way we’ve been selling to some people is that it’s very much a slice of life real story, there are no gimmicks to hide behind, it’s two characters, there are consequences of mistakes made in the past,  but the key to it is that these two boys are growing up at that time in their life where there are things to deal with, there are challenges in life, but falling in love is not one of the challenges. The LGBT element of them finding each other we always wanted to be the positive that got them through harder bits in their life, rather than that being something that was a challenge to face. So yeah, it’s got a bit of sport, a bit of fluff, comedy, it’s kind of a soap opera!

Sounds good, so what is the sort of age range of the audience do you think?

It’s a really tricky question actually, because the only thing that I would possibly think gives it any kind of age rating is language, there is some swearing in it, but as far as I’m concerned there is no right age to read LGBT love stories –

Any age is the right age

Any age is the right age, exactly. It doesn’t go, you know, it doesn’t get graphic!

Yes, I know where you’re going with that one!

So, the language means it maybe gears a little bit older but then these days I mean, it depends on people’s personal feelings

I guess it depends on who’s reading it as well?

Exactly, I mean the characters are seventeen-going-eighteen, our readership that we found online, and it’s been wonderful to see the kind of people reading it varies from thirteen-year-olds who are maybe coming in to finding themselves, and they are, its exactly the same as being at school and looking at the older years, pre-empting where they’re going to be in a few years’ time, but then we’ve got one of the quotes on the back of the issue that’s just been printed, from one of our readers online,  she said “I never thought I would be a sixty-something reader who would be bawling my eyes out with a teen love story”, anyone can read it really, and in terms of the youngest bracket just depends on how some people feel about a bit of language really.

I think most kids these days are reading stuff that has a bit of language in!

Exactly! We come from a more innocent time, you know? I’ll be there going “oh no I don’t think it – oh, you know all those words already? Well that’s fine!” In terms of it being a love story, I think for any age it’s a love story. It deals with some tricky things of growing up, you know there’s a bit of bullying, one of the characters in particular has had a pretty dark passage to where he is now, but we tried to deal with it all in a very, mostly a very real approach, and as I say the fluff and the fact that they fall in love, is the bit that’s going to get them through it.

It’s just something that helps them through all the other stuff?

Awesome, well I’m going to buy a copy of that. I’ll be honest I started reading it online and went “nope, need this in my hands”, plus then I can lend it to my girl!

[You might want to look out for Breaks in a forthcoming ‘True Brit’ column… just sayin’ – Ed.] 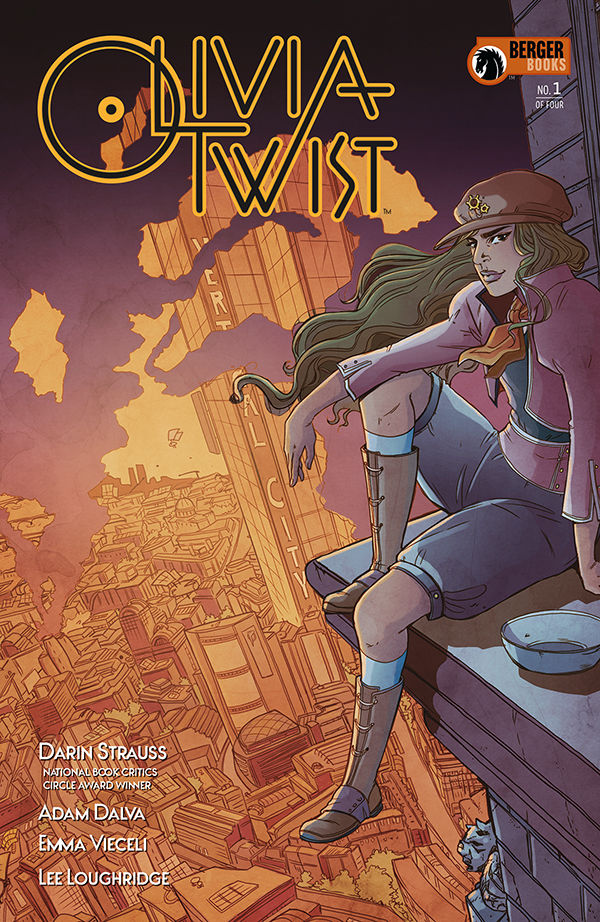 So another thing that is coming out at the moment is Olivia Twist. The art in this book is amazing! Some of the world building that you do in the backgrounds for example the moment in issue one where they go onto the roof! Where did you find your inspiration for that, where did that come from?

So an element of it obviously comes from the writers, Darin [Strauss] and Adam [Dalva], because they knew they wanted it to 2050 London, they kept talking about this “mile high tower”, which caused a lot of problems because the guys have never done comics before, so they’re looking at it in a filmatic way, so there’s me trying to explain to them that you can’t have a tower that is literally a mile high in a panel with some characters – you’re not going to see more than tony ants at the bottom, so that was a bit of a challenge to get around how to present that as being a high tower, whilst also being able to show things around it. In terms of that shot that you’re talking about, London was the inspiration, I literally thought well, 2050 isn’t that far ahead, and we know how much history there is in London now, but there’ll be these new monoliths sort of appearing in the middle of it, so I literally took a look, I was looking at loads of different shots that people have taken from the London Eye and whatever, mapped out London in my head, and then sort of… you can see St Paul’s if you look at that cover, St Paul’s is still there, the Shard is there, the Gherkin is there, and then I’ve just thrown in where I potentially think a new housing estate might have been, this might have been there or that might have been there. So it’s kind of recognisable as London, it’s hard because we don’t know exactly in which direction things are going to go, of course…

Although it is slightly worrying reading the book and thinking “things could go in this direction”!

Let’s hope it doesn’t go there, yes! It’s very much a lesson of where we do not want to go! And I think that’s quite a clever move for Adam and Darin, because Oliver Twist, Dickens was all about class, and social discrepancies, and using Oliver originally as a character through which we could see a world that just was not meshing, and that there were these different people not connecting, and so to do a twist on it, it goes far beyond just being a gender-bent version, it’s still looking societal discord, but in a way, in a direction that we’re already on, which is scary. 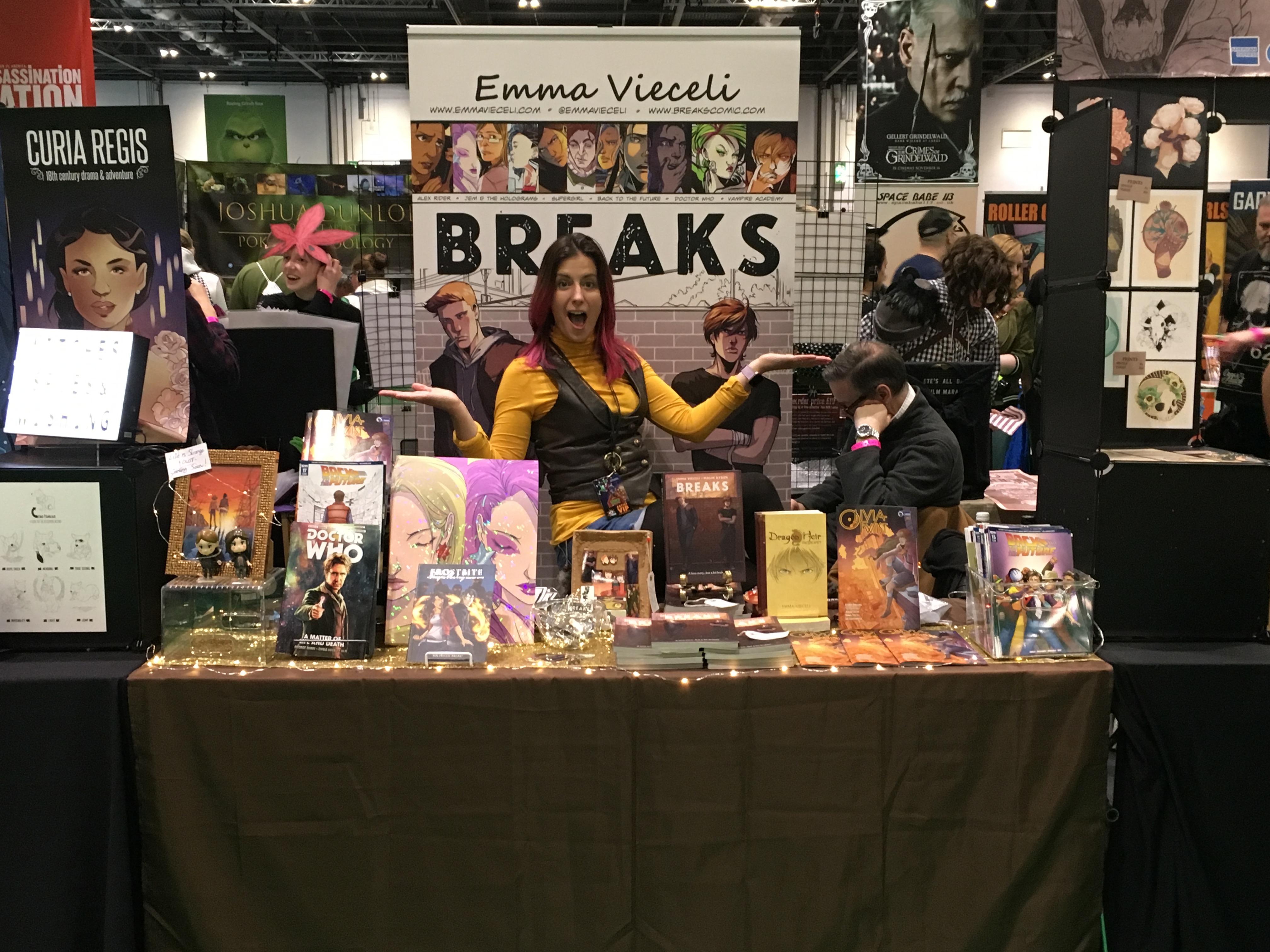 Seems to me like that’s a good place to leave it, Emma was an absolute joy to talk to, and I look forward to diving into Breaks as soon as I get the chance…

Breaks is available to buy where all good comics are sold, as well as online at www.breakscomic.com

Olivia Twist is four part comic book series published by Berger Books, an imprint of Dark Horse. Issues #2 is out now, and the trade is due out on 7 May 2019