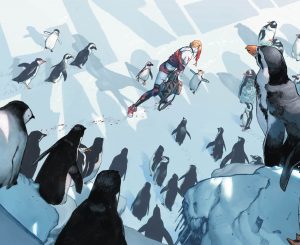 Harley Finds Refuge Amongst the Penguins

DC’s latest take on their Crisis motif, Heroes in Crisis, continues as the second issue reveals very little but does create even more questions and will leave the reader emotionally spent. In the wake of last issues slaughter at Sanctuary, a mental health retreat and spa created for super heroes by DC’s Holy Trinity to help their colleagues deal with the horrors of their work. Located in the middle of Nebraska Sanctuary appears to be a simple little farm, but beneath the façade is a state of the art treatment facility that unfortunately was attacked and several of the patients were slaughtered, including longtime Titans Arsenal and my favorite Flash, Wally West. In the wake of the attack two former patients, Booster Gold and Harley Quinn engage in a brutal fight with each accusing the other of the murders. 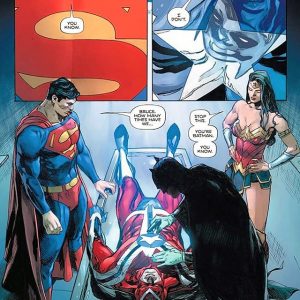 The Autopsy of a Man of Steel

Heroes in Crisis #2 picks up after the fight with both Harley and Booster looking for help. While Harley has made her way to Gotham and the Penguin Booster has called upon his trusty robot sidekick Skeets to aid him in his healing and to help him figure out his next move. While Harley and Booster recover the Trinity are looking for answers as Batman is performing a very difficult autopsy on Commander Steel. The Autopsy scene also allows for the trinity to come to terms with what has happened, how it could have happened and whether or not Batman (as DC’s ultimate bastard) had been taping Sanctuary and the Sanctuary therapy sessions to use against the heroes if any of them ever went rogue. Tom King does an excellent job of keeping the reader guessing as to whom the real culprit of the heinous murders is. Harley has an excellent scene and makes a compelling argument against Booster and Booster’s confusion doesn’t help his case but it feels to simple for an event of this magnitude and there has to be more to the murders. King also continues the one page Sanctuary intake tapes, this issues begins with Poison Ivy but then shifts to the Trinity as Batman, Superman, and Wonder Woman each take turn with some very telling conversations…. conversations you would hope no one but your therapist would ever see…. conversations you would hope would never see the light of day. 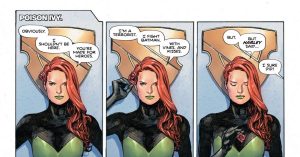 Let it All Out Poison Ivy

At first Heroes in Crisis #2 felt like a bit of a let down after the stellar first issue but the story wouldn’t leave me and I had to sit down and read it again, which is where I realized how good it truly was. This issue is full of deep and honest emotion that covers the entire emotional spectrum. There’s anger, grief, loss, and even a bit of humor. King masterfully writes a multitude of DC’s heroes and villains and made me feel for every one of them. At the end of my second reading I was as emotionally spent as Harley Quinn, who somehow is becoming my favorite character in this story, which I never would have expected when I first picked up Heroes in Crisis. Clay Mann’s pencils continue to impress, as I have no doubt that he will be a star by the end of this event. Travis Moore lends a hand with a few issues, but his style is so close to Mann’s it was a seamless switch, which is best when your adding artists to your flagship event. Overall this is a beautiful book, with a compelling story that any true DC fan will love.

Verdict: Heroes in Crisis #2 blew me away. For an issue that I wasn’t sure about at first it’s continuing to have an effect on me. Tom King is writing an emotionally compelling story that I cannot wait to see play out over the course of this newest DC Crisis.