You never know what you are going to get with a comic called Dead Rabbit. It could have been a lot of different things. What it is, though, is pretty awesome. The titular protagonist, real name Martin Dobbs, robbed everything from banks to crime lords to Fenway Park in the 90s. He killed and beat a lot of people. Then, out of nowhere, he disappeared. Dead or retired, the world doesn’t know. Lucky for us, turns out he retired. He lives with his wife in the urban suburbs. He used to be living large, but the money is spent and the credit cards are maxed. So, better or worse, he is back out of retirement. Seems like twenty years isn’t long enough to forgive old grudges, though, and the mafia is ready to get their revenge.

Dead Rabbit, frames itself as an action-comedy, but frankly, comedy suits the comic for only the first pages. It kills it as action and drama, though. Writer Gerry Duggan wrote Deadpool for awhile, and he clearly honed his violent action storytelling there. Blood drips from the page often enough to qualify as a Punisher comic. Martin isn’t trying to fool anyone into thinking he is a hero though. Because his actions are born out of necessity and boredom, not duty or responsibility, I never felt like I was being fed some loose justifications. The comic immediately reminded me of the Dexter TV series, from the monotony of living a cover as a real, mature adult to recognizing others like him. Dexter mixed with Boondock Saints. 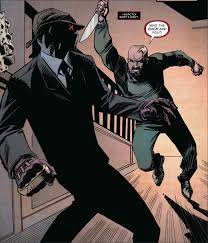 The art flows dynamically and organically. The action scenes are never confusing, and I can practically hear the blows in my head. Attention to detail in the destruction of bodies and property really pays off here. The art retains its grittiness, without the palette ever becoming boring or dull. Above all, the book screams Boston brawl.

Verdict: Buy! This comic gave me violent action without trying to sell me this guy as a hero. He does good and bad equally, and he doesn’t bother with moral implications or putting on a show. He kills, he robs, he saves people. Most of all, he makes the reader root for him, for the simple fact he is dang good at what he does. I can’t wait to watch him kick some more butt.

PS. There is currently a trademark battle going over the name Dead Rabbit. The original Dead Rabbit is a bar with comics as menus. As a result, this comic might have to make some name changes or cancel.