Well, friends, it’s that time of the year when the weather turns a little colder, the pumpkins (and pumpkin ale!) are nearly ready, and the New York Knicks open training camp for what will surely be another terrible season in the NBA. (Sorry, long-time-fan bitterness sneaking out!) More importantly for myself and many of you reading here, next week brings comics fans that most stellar of events,

The New York Comic Con (or the NYCC to its friends…and it has many!) with its plethora of delights…but which can take some navigation, so Your Cranky Old Uncle Bob is here to throw out a few things that he’s learned from sometimes bitter experience!

(Please, Robert dear, don’t tell that “derailed train” story again. Not that it wasn’t a difficult trip for you, but your re-tellings have transformed it into Homer’s “Odyssey”! Wouldn’t it be best to move things along, darling? @udrey )

My “imagined” friend but real muse Audrey is certainly right, as I can be long-winded (our listeners can attest to that!), although the “getting to” and “getting home from” the NYCC can have its challenges! No matter how you’ve come into Manhattan (unless it’s in one of those “prison vans”, in which case, disregard everything that follows!), you’ll probably be walking over to the Jacob Javits Convention Center on 11th Avenue and 34th Street. The good folks at ReedPOP have their own “crossing guards” on the surrounding streets, but really, all you need do is follow the cos-players…but this is New York City, so perhaps some of them are just regular folks heading home or to work, so make sure you end up at the NYCC, and not a fantasy-themed club! (By the way, if you’re walking west on 34th Street toward The Javits, I highly recommend the Skylight Diner near 9th Avenue for a bit of old-time “Big Apple” flavor! I always make it a point to stop for a full breakfast at least once during the con!)

There’s a new-ish mass transit option available to get to the NYCC, and that’s via the 7-Line subway which ends at the Hudson Yards Station, a recently-opened terminal that many haven’t found yet…including, it seems, those dreaded commuting sewer alligators! The station empties into a small park that is literally across the street from The Javits, and not only that, 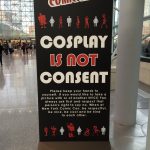 the park often becomes a sort-of “cos-play staging area”, so it can be a nice mood-setter for your whole day!

At the entrance to the Javits Center, the NYCC team assembled by ReedPop always does a fabulous job of keeping everything moving, and considering the size of the crowd (they’re anticipating over 250,000 this year!), that’s no mean feat! Once inside, their ever-present yet unobtrusive security staff makes sure that everyone is safe in a very fan-friendly way, and as the first convention to adopt and publicize the “COSPLAY IS NOT CONSENT” initiative, that means every fan!

At this point, Gentle Reader, you’re probably wondering when I’ll get to the “good stuff”? Well, now that I’ve navigated you through the hard parts of getting into the NYCC (well, beyond riding the L.I.R.R., but if I start to tell that story, Audrey will be upset with me!), here are a few things to know that even seasoned con-goers sometimes forget…which is one of the reasons I’m writing this, so the article can act as my own checklist! (You’ll see…you’ll be old, too, one day!)

Inside the mammoth Jacob Javits Center, each section of the NYCC is as big as some local cons that I’ve been to, so whether you’re headed to the Show Floor, the Panel/Autograph area, or Artist Alley, it’s important to do some planning. Now, as long-time listeners know, I’m a Luddite who uses pen and paper, so I’ve gone to the NYCC site and created lists for my most important stops in  Artist Alley, as well as a schedule for the panels I’m most eager to see. Now, that said, all the rest of you can probably achieve a better result by simply using the NYCC Mobile App…but then you won’t have a tangible reminder of what you did…unless you’d prefer there wasn’t any evidence, just in case!

For my money (not that I’ll have any after the con!), whether you’re going on multiple days or just one, pick out the “have to meet” guests and “must-get” items, and head for those right away! At smaller shows you can chance getting a last-minute bargain, but with a crowd this size, if there’s a special print or show exclusive you have your eye on…grab it ASAP! This goes for creator interaction as well, as their time in Artist Alley can be cut short by panels, publisher’s booth signings, or other commitments, so hit your A-list right out of the gate. Last year for example, Linda Sejic fell ill during the show, and although I procured her signature on some Blood Stain volumes as gifts for friends, when I returned the next day to have my personal books signed, she was back at her hotel trying to recuperate! (Y’see, I didn’t want to lug all the books I needed signed each day…you get it, I’m sure, but…lesson learned!)

Speaking of lugging things around, although it seems a third of the people are back-packing, that can be problematic in a lot of ways, most importantly in terms of trying to keep books and artwork from getting mangled! One of the best convention purchases I ever made was buying a $10 tote-bag at our first NYCC, and coupled with a large-ish plastic art sleeve (available from dealers in Artist Alley!), I’ve so far avoided the horror of discovering that a wonderful print now is blessed with not only a favourite creator’s autograph, but a large crease running through its center! (Art-tubes are fine for prints, but they are very unkind to comics, and you should always be nice to your comics!)

A quick note here about the Show Floor; don’t forget to check out the north end of that room, as there a ton of great things there! It’s a little less hectic than the center of the room with all 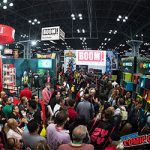 the publisher’s booths, so it can be a “moving respite” from the hubbub whilst still offering up all sorts of delightful tchotchkes to be purchased. Beyond that, this is where the vast majority of the actual comic book dealers set up shop, so that’s where you can find great deals on back-issues, trades, and “omnibi”. (That is the plural for “omnibus”, isn’t it? I get so confused!)

It can be very draining to wend your way through the crowds, and perhaps even more to wait in line (You’d think there’d be incidents of “queue rage”, but our community seems above such tsouris!), so, and not to sound like your Mother,  it’s vital to keep your energy up so as to not lose focus and miss a once-in-a-lifetime moment, as they happen all around this magical place. The lower level of The Javits has a food court with a lot of variety, and just outside the main entrance there is a “wagon train” featuring some of NYC’s best food trucks, so you have plenty of options! Additionally, the main level of the NYCC sports quite a few oases where you can grab a quick nosh and a drink. (Outside the con, just up the street on 11th Avenue at 45th Street is the Gotham West Market, which has a fabulous range of choices from comfort foods to the more exotic, if you don’t mind stepping away from the con, that is.)

One last thought; the best thing that I’ve learned in over thirty-five years of convention going is to give yourself the opportunity to really take in all that is happening around you! Make the time to  “people watch”, not only the folks in costumes, but everyone, particularly the family groups. I know this will sound corny, but I get so much joy out of seeing those moms and dads with little ones that it’s beyond my putting it into words. 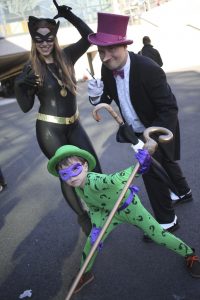 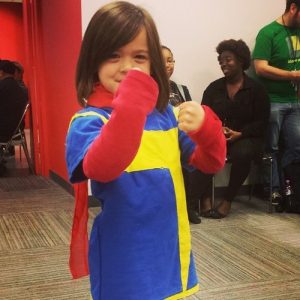 (I’ll clue you into a “secret spot” for this, but don’t tell anyone else–promise? At the north end of the Main Floor, just before what has been in the past, and will probably be again this year, the entrance to Artist Alley, there’s a large open area where cos-players often gather. This is a wonderful spot to grab a hunk of floor and simply let the NYCC come to to you.)

Here’s hoping that each and every one of you attending this year’s NYCC fills your own personal “wish list”!

ps) You probably wouldn’t have guessed it, but the real-life version of my muse Audrey wasn’t a stranger to comics: 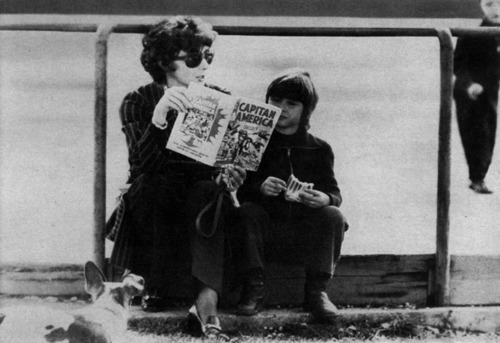