When Kelly Thompson’s brilliant Rogue And Gambit miniseries became an ongoing, I found myself hesitant. Both characters have always worked better as standouts in a team rather than the focus of a large book. But issue #2 of Mr & Mrs X grandly fulfills the promise of last month’s launch, and has become a must-read. 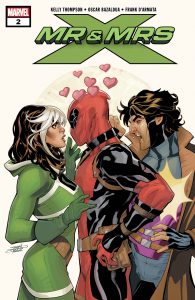 The delightful premise continues from issue #1: Rogue and Gambit find their honeymoon interrupted by the Shi’Ar Imperial Guard and Deadpool as they escort a package entrusted to them by Kitty Pryde. What follows is a funny and frenetic battle between the newlyweds and the Merc with a Mouth for ownership of a mysterious egg. Kelly Thompson is in top form throughout the issue, perfectly capturing her two leads and her guest star. She carries over Wade’s attraction to Rogue from Uncanny Avengers, as well as adds a blend of jealousy and attraction to Gambit, which makes for a laugh-out-loud, repartee-filled read. Deadpool’s never been my cup of tea, but Thompson’s take on him is a riot. The one-liners fly as fast as Gambit’s cards, and the fight plotting is engrossing and thrilling.

I left the first issue of this book unsure about Oscar Bazaldua’s art, but by the end of this month’s, I found myself completely sold and raring for more. One of the best X-Men tropes is how the characters manage to always replicate their signature color schemes no matter the clothes or the settings, and Bazaldua and colorist Frank D’Armata’s designs of Rogue and Gambit’s space looks are no exception. They’re instantly recognizable as the characters we love, but look appropriately different for the setting. Bazaldua’s facial expressions are top notch, showing genuine frustration and concern with Gambit and the right mix of attitude and conflict with Rogue. The action crackles and jumps off the panels, pulling readers in and creating the classic dilemma of lingering on a stunning page or rushing to the next to follow the action. Bazaldua nails Gambit’s acrobatics and Rogue’s aggression, as well as the various adversaries’ unique powers. D’Armata’s color choice is excellent, particularly in the many explosions and superpower displays. This book looks fantastic from start to finish, and Bazaldua and D’Armata prove themselves a team worth watching.

While this issue favors humor and action over advancing the plot, it’s a joy to read. Thompson and company have a great handle on their leads, and make this book one to watch well past the honeymoon phase.