Created and Written by Ryan Parrott 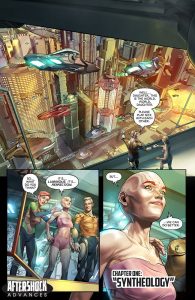 Automation and the possibilities it brings is scary, exciting but scary. Volition looks at a world where robots or artificials are integrated into society almost as another race. This comic is split into two main storylines with some backstory of how the world got to the point we find ourselves in the year 2132.

Artificials are no longer just slaves or meanable labourers but have ordinary jobs with some even garnering celebrity status. However, there are two problems for the artificials, one, older models are finding they must upgrade or become obsolete and there is a virus called rust which is ravaging the artificial population and more than in a might need some more oil way. This leads to a robot heist and one artificial nurse maybe finding some answers to how they can stop the rust epidemic.

Parrott writes a killer of a first issue, as robots in a sci-fi future is hardly an idea we have not seen before, but the dialogue and ideas, the real character brought to everyone but especially the artificals introduced and highlighted make this issue a joy to read. Furthermore, he manages to make the four pages of blatant world exposition feel enriching not slowing the pace or feel incumbent on the story and is a testament to how intriguing he made the world in the first three pages.

Francia’s art is sublime, the use of colours highlights and set the tone whilst bringing a vitality to the action and scenes. This elevates the already great pencil and inks which give real motion and detail to the unfolding events of future earth.

Buy. This is an exciting sci-fi comic that is brimming with character and action and has some amazing visuals.