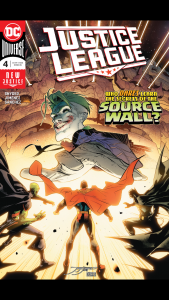 Things are bleak for our Leaguers as the villains take hold and dig in. First things first, the baby is the fourth generation of the Flash villain the Turtle and it’s “attuned to the still force” according to Grod. For the rest of the League, the still force is making them susceptible to things like mind control.

Mind control has been an aspect of the superhero genre for a long time. In this issue, four characters were controlled in two different ways. The more shocking of the two is the Joker and Luthor hard wiring themselves into Superman and the Martian Manhunters brain. All and all, this is a somewhat inspired plan not only do the villains hitch a ride through the totality and to wherever it took them but they now also have control of the only two beings that could have priced the totality, to begin with. 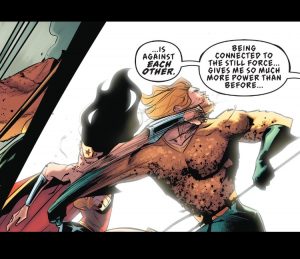 The second and less shocking but just as traditional method of mind control is the pitting of two heroes against each other trough illusion and deception. In this instance, Diana and Aurther are unwittingly squaring off. Unfortunately, things are looking pretty bad for our heroes and there where the good reader has left un till next issue.

However, there’s something funny about issue number five, for those that have not heard yet, Scott Snyder will be taking an intermittent back seat as far as the Justice League(s) are concerned. While it is not an earth-shattering surprise that he has decided to do this the place that he has picked to step back is an odd one.

There is something that feels rather incomplete about the handoff. After looking back at previews and snooping on DC’s website it looks as if the writing duties for Justice League are going to be handed back and forth every couple of issues Between Tynion and Snyder. It’s pretty rare that a book benefits from being handed back and forth because even in the Mark Waid and Grant Morrison JLA run there are some disjointed moments.

It would seem that Snyder has a pretty full plate so it’s understandable that he would want another trusted writer to come to co-write. It’s very unlikely that with Tynion taking over on and off there will be any kind of quality dip however it is sort of strange for a reader to see one authors name on a book for the first issue of that month and to see a different authors name on the second issue. My hopes for the series are that moving forward there is a seamless sort of transition that happens and that everything goes according to the plan that the authors have laid out. They really do seem to be a smart group of guys and with Justice League Odyssey being pushed back as far as it has the majority of the legwork is going to be put on Snyder and Tynion. I will defiantly still be following the series and watching closely.