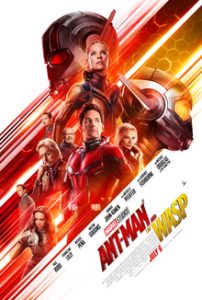 Ant Man and the Wasp snuck up on me. In the post Avengers: Infinity War atmosphere it didn’t register with me that there was another Marvel movie on the horizon before next March’s highly anticipated Captain Marvel. Thankfully I started to notice the ads and the commercials over the past few weeks and it dawned on me that there was another Marvel film this summer and thank goodness there was since I really needed a smile on my face and Ant Man and the Wasp was just the cure to pick up my mood since it was filled with great action, laugh out loud comedy, and stellar acting in a tight action-caper-comedy. It is also a brilliant move by Marvel Studios to release Ant Man & the Waspas the direct follow up to Avengers: Infinity Waras it is the complete opposite of the galaxy spanning emotional roller coaster and a film that fans will both enjoy but not leave devastated from.

Life isn’t terrible for Scott Lang (Paul Rudd). Even though he is on house arrest for his participation in the Avengers Civil War (Captain America: Civil War) and his violation of the Sokovia Accords by being an unregistered hero. At the beginning of the film we learn that Scott has three days left on his  two years of house arrest before he begins a three-year probation that will lead to a twenty-year prison sentence if he associates with any known heroes in violation of the Accords. We also learn that Hank Pym (Michael Douglas) and Hope Van Dyne (Evangeline Lilly) are on the run since they to are in violation of the accords by furnishing Scott with the Ant Man suit. FBI Agent James ‘Jimmy’ Woo played wonderfully by Randall Park whose awkward portrayal leads to some perfect comedic moments monitors Scott’s house arrest. Luis is also back as he and Scott have started X-Con (I’m sure a future X-Property at the House of Ideas) a private security company that will hopefully lead to a successful transition to a stable and law abiding employment. Yet my favorite part of this opening sequence is that Scott is a part of his daughter Cassie’s life AND more importantly he and his ex-wife Maggie (Judy Greer) and her husband Jim (Bobby Cann-avale) have a positive and supportive relationship with Scott. I understood the antagonistic relationship in Ant Man but love the fact that they have evolved as an extended family and actually care for one another. 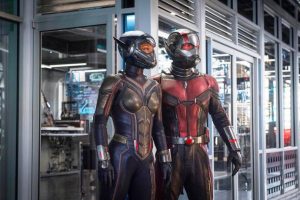 The focus of the movie shifts as Hope and Hank reenter Scott’s life by kidnapping him to aid in their construction of a Quantum Tunnel so they can enter the Quamtum Realm to rescue Janet Van Dyne (Michelle Pfieffer) who was lost there thirty years earlier. The movie really picks up at this point and I really lost myself in the adventure that ensues. Since Scott traveled to the Quantum Realm in the first movie he and Janet share a connection so even though they are displeased with his action in Captain America: Civil War Hank and Hope need him. Scott is also introduced to one of the antagonists of the film, black market tech dealer Sonny Burch, perfectly played by the great Walter Goggins and everyone meets the second and tragic antagonist, the Ghost (Hanna John-Kamen) both of whom want the Quantum Tunnel but for vastly different reasons. Add in Bill Foster (Laurence Fishburne) AKA Goliath and a great third act where director Peyton Reed really gets to play with the size manipulation aspect of the Ant Man & the Wasp’s powers and you have a great Marvel movie.

Side Note: Marvel Studios needs to do a ‘80s Ant Man, the Wasp, and Goliath movie. This MUST be made. 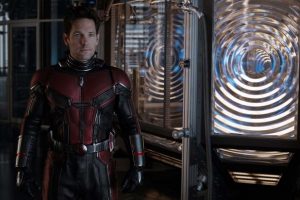 I really enjoyed Ant Man & the Wasp. It was full of fun action and great comedy with just enough drama to keep me invested. Paul Rudd is one of my favorite actors and its nice to see an everyman play a superhero and he owns the Scott Lang character. Evangeline Lilly kicks ass as the Wasp while Michael Douglas really buys into his role as Hank Pym in this film. It was great to see Laurence Fishburne join the MCU and I hope this isn’t a one and done but it is Michael Pena who steals every scene he is in. His portrayal of Luis is fun and delightful and his loyalty to Scott as well as Dave (Tip ‘TI’ Harris) and Kurt (David Dastmalchian) of X-Con’s is noble. Although not the best MCU film Ant Man & the Wasp will put a smile on your face and leave you wanting more adventures from Scott, Hope, and company. Don’t leave early as the Mid-Credit scene is a must see and although not vital the Post-Credit scene fits perfectly with the film.