Batman #50 is a poignant, character-defining, and achingly cruel moment in Batman’s 80 year history.

Since taking the reins on the character in 2016, Tom King (writer) has been asking his audience one simple question, “can Batman be happy?” King’s run has yet to introduce any new characters, hasn’t seen the Bat invent even one new gadget, and has been relatively gentle with Gotham as his sole objective has been to probe Bruce Wayne’s psyche and his relationships to determine if Bruce Wayne can be happy and be Batman. And after two years of investigation and interrogation, Tom King’s answer is, no.

Batman’s one weakness is happiness.

Batman #50 features the long awaited nuptials of Batman and Catwoman and is told through letters that they have written to each other. And like any couple with pre-wedding jitters, they use the letters to reflect on their relationship, how it’s helped them to grow as individuals, what their union will mean for one another, and most importantly what they mean to each other. King uses this as a backdrop to reminisce and celebrate courtship the two have shared while a cavalcade of artists render nostalgia fueled splashes of both characters. King’s script proves to be poignant, affecting, and genuinely moving while also bringing new depth to each characters. 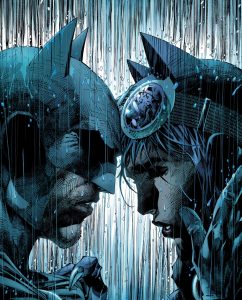 Through Batman, we learn of Catwoman’s tenacity which gives her a greater sense of gravitas than the character has ever known. Meanwhile, the Dark Knight is left being vulnerable in the eyes of readers as Catwoman makes him seem all the more heroic. Not to mention one of the best cliffhangers I’d ever seen in a comic book that left me begging for the next issue. In one fell swoop, this masterpiece of an issue advances Tom King’s story, brings a new meaning to characters that have long since believed to be defined, and gifts us one of the most affecting Batman stories that I have ever read.