A reverence for reference requires some skepticism. by Mike Antonucci

About eight years ago, I received a startling email from the author of a famous reference book about a particular type of toy. It described in meticulous detail how extraordinarily difficult it had been in the pre-Internet days to do research that produced definitive information. In other words, it described how much speculation went into the book, side by side with hard evidence. We could call it deduction, if that’s a bit more fair.

There were many reasons why guesswork —very careful guesswork —had to suffice for some listings. To start with, most of the toys we now regard as collectibles were manufactured with no sense that the history of their creation would matter. Changing a paint color or modifying a part might very well have been an on-the-fly production-line decision; there may not have been so much as a memo documenting it.  Avenues of investigation included interviews with ex-workers, surveys of experienced collectors, and examinations of old ads and catalogs. Translation: The author was trying to reconcile conflicting memories, differing opinions and a hodgepodge of source material.

Now, a brief digression about why I’m not naming the reference book and the author. Journalists shouldn’t gather information under false pretenses, and the author believed I was communicating privately as a collector/fan. Indeed, that’s exactly what I was doing in that exchange of email. My perception of reference books was altered drastically, so I realized the journalistic potential of what I was being told. But I can’t change the context of the revelations after the fact. The emails are in the personal category, not the professional.

I’d love to quote the email. It’s incredibly evocative about how research has changed. At the time the book was being assembled, long-distance calls were a major expense. Photography in the pre-digital years was daunting financially and operationally. There’s much more in that vein — all in all, a fascinating tale about the kind of book that some of us revere as much as the items it enumerates. But I’m exercising extreme caution to not even give away the tone of the author. 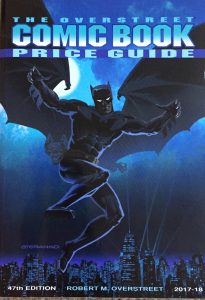 The implications for many reference books are obvious: They’re useful, not conclusive. They can be transfixing, but they’re highly unlikely to be infallible. And that’s the way I think about my favorite book, the Overstreet Comic Book Price Guide. In its own words, it’s “the most comprehensive work available,” not just on pricing, but on comics history. Even so, even after 47 editions, it can’t help but be a work in progress.

“When it comes to the Overstreet Price Guide, it’s a fabulous resource,” says Lee Hester, owner of Lee’s Comics in Northern California, in the heart of Silicon Valley. “It has a wealth of valuable information, and any serious fan needs to have a recent issue, just for the information.”

Pricing, Hester noted, is a different topic. But the non-fluctuating info “tends to be accurate.” That said, he added, “it should be treated as a source, not as the word of God from on high. . . . Errors and omissions creep into the best of works.” Hester noted that he has seen many example of inaccuracies over the years. One that sticks out: “a popular title that Overstreet has been referring to for 47 years as “Superman’s Girlfriend Lois Lane“. That’s probably what the public thinks it’s called too. If you look closely, you’ll find that Superman does not have a “Girlfriend”. Lois is his “Girl Friend”. There’s a space between those words on the comic. An important distinction, I think.”

Is it an important distinction? I think so, particularly in a reference work that’s iconic. And I’m guessing — yes, just guessing — that Mr. Bob Reyer (an editor known for his ferocious dedication to the Oxford comma) thinks so, too. Literacy demands precision, and facts beg for consistency.

I would never take a pen to the margins of a comic. But I scribble all over my Overstreet. It’s my favorite book of discovery and mystery every year.