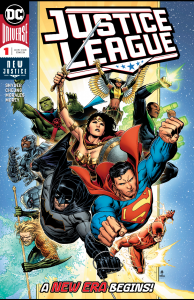 DC comics has gone through a cascade of event-level happenings in which the source wall was destroyed and some giant trees grew on earth. These events have been helmed by Scott Snyder and on the heels of those events and as a direct result of them comes Justice League #1. This is a very familiar Justice League lineup that is reminiscent of the animated series. It’s looking like the League is going to square off against the Legion of Doom and that’s probably just the beginning.

Jim Chegue’s art is clean and has good definition. The book is vibrantly well colored by Tomeu Morey. There are distinct color palette difference between the League and the Legion as well as some good mood lighting the underscores several scenes. Cheque’s renderings of the Legion have touches of both the new and the more classical. This seems to be a point for the book as a whole during this first issue.

The writing is good and blends humor, horror, and heroics rather well. The characters, for the most part, have distinguishable voices even when they are doing impressions of Batman. Snyder devotes some time to seeding plots to come and referencing “sins committed.” This is pretty common as far as first issues are conceded but it makes for a slow first issue of set up regardless of your opening Justice League action.

The subheader on the cover says “A New Era Begins!”  and while it’s definitely a reference to the creative team there is a strange sense of deja vu about this book. The best way to sum up how it feels is to say that it’s a “new era of familiar things.” The Hall of Justice has just been built, John Jones is orchestrating the Justice League and Lex Luthor is back in the role of villain for the first time since the end of Forever Evil. On top of all of that, the Legion of Doom has returned! These are all things that as readers we are familiar with. Encountering familiar things is by no means bad, but the cover says “New” on it twice and this is apart of the “New Age of DC Heros.” In fact, its the direct continuation of Metal with is the Launchpad for that particular group of titles.

Justice League #1 is worth reading I can’t recommend that everyone go out and buy a copy because it’s not going to peak everyone’s interest, however, Snyder is known for playing the long game and it’s definitely worth knowing what’s going on with the DCU’s most powerful team. Even though it’s really difficult to judge something when all a reader has been given is 32 pages as readers we have some

really strong first issues from Snyder. Batman we were dropped right into the world and the intrigue, Metal rocked its readers with a solid Justice League opening and this first issue just didn’t have the same punch or intrigue that those had. My hopes and wants for this book are that we get to see what/whoever Luthor locked in the basement, and I need to know why Luthor is strangling Starman (On the Left). Most importantly though I hope that Snyder Brings his best to the table and we really do get to see something new.