Endings are very often beginnings, I mean think of how most romances end with the couple only just getting together; even though life does not stop because you have reached a goal or milestone. This reflects this issue in many ways as whilst it is the final issue of the new world arc; it is only the beginning of Rick and the survivors’ interactions with the Commonwealth. 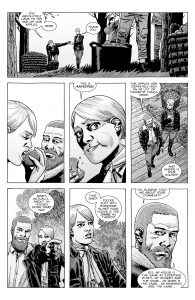 This issue has three sequences; opening with Michonne and her newly found daughter being shown by a high-ranking member of the Commonwealth (Lance), an apartment where Michonne is offered to reside in, and it is massive. This is because the commonwealth holds her in high regard due to her pre-apocalyptic job as a lawyer. Michonne still shows some weariness towards this gesture, you can not blame her after all the things she has seen, but her daughter’s enthusiasm at moving into a larger apartment helps to ease her fears for now. Then we find Dwight and Laura discussing their relationship; which is quickly interrupted by the arrival back of the Commonwealth expedition. The Commonwealth Governor Pamela Milton looks like a colonial British explorer and that idea and air of superiority is found in her manner and conversation with Rick which takes up the rest of the issue where they discuss their different leadership styles.

Kirkman illustrates quickly demonstrates the differences between Rick and Milton’s perspectives on how the world works, without making it feel hammered into the reader or forced exposition of this is one side and here is the other, instead it feels like a genuine conversation between two leaders in the crazy post-apocalyptic world they find themselves in. This though flawlessly sets up the potential for conflict in future issues but does not instantly demand or jump to an all-out brawl between the two sides. This potential conflict is more of philosophical one against a far superior force as the commonwealth dwarfs Rick’s forces. Furthermore, it is framed in such a way you could easily take either side of the argument/debate, which is something few comics or writers take the time to do as usually one side is more dominant. The balance of characters paired with small character moments such as the new zany Princess meeting Rick showcase why this series has lasted for 180 issues.

Adlard, Gaudiano and Rathburn’s art is as brilliant as ever with the crisp lines and shades of grey making what is an actionless comic feel injected with energy and emotion that you do not mind the lack of action.

This is a good issue to pick up if you have dropped off, it sets up the newer characters and their mentalities; but the issue is just a great look at character and how different people survive, in a way that still feels fresh fifteen years after the first issue.