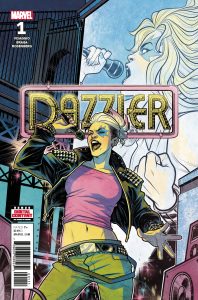 Bias alert: as you can see from my author bio, I’m a bit of a Dazzler nut. But that just means you should trust me even more when I say that Dazzler: X-Song is fantastic. It’s everything a Dazzler book should be: painted for the gods with disco colors, alive with music and entertainment jokes, and a brilliant portrait of what makes Alison Blaire who she is. The admittedly nonsensically titled Dazzler: X-Song is an easy entry point for readers excited about her upcoming debut in Astonishing X-Men or wondering where Allison’s been the past few years. It’s an interlude that could just as easily be taking place in the Claremont era, or during the Gold/Blue roll call of the 90s, as in the 2010s. That’s because writer Magdalene Visaggio has nailed Dazzler’s core dilemma as a character: the pull of stardom and performing versus surrendering that status to fight the good fight. It’s a timeless struggle for this outlier character that Visaggio captures perfectly.

The gist of the issue is this: Dazzler has joined a new band because, once again, she’s done with superheroing and just wants to sing. In classic Dazzler fashion, she’s soon faced with a tough choice to make. A contingent of her mutant fans have started harassing Inhumans at her shows. At first, Allison seems to think it’ll resolve itself, and throws out some “hey everybody just be chill” rhetoric. But it’s made clear that that won’t be enough. Does she side with her fellow mutants? Does she back the Inhumans, people responsible for the death and downfall of her community (yes, this issue does have some nice meta moments about Inhumans versus X-Men)? A hero makes her own path, and Dazzler finds a uniquely Alison way to do just that.

It can’t be overstated how brilliantly Visaggio walks the line here between entertaining character-first comic and socially conscious superhero fare. The “X-Men as minorities” metaphor gets a lot of flack, but she turns that on its head and leans into ideas of mutant passing privilege and the responsibility inherent to celebrity. Alison is white, cis, straight, blonde, beautiful. She can easily pass for “normal”, especially compared to most of the mutants and Inhumans filling her shows. She could let security deal with this, she could pass the buck to her manager, she could send a tweet praising good people on both sides. But she’s a hero, so she does more. There’s also a spot-on depiction of a phenomenon often experienced but rarely shown: the tribalism and fixation on classification that often happens within minority groups, the naming and reframing of identities within the same larger community. In this case, Alison is performing for all the genetic pariahs, both mutants and Inhumans. But she can still be overheard praising the crowd for letting their mutie freak flag fly. Then there’s mutants telling Inhumans to stay away, both sides chanting for solidarity, all while Alison and her openly “non-baseline” band just want to make music. It’s impressive how  effectively Visaggio adapts this tendency to winnow down and rebrand our own communities to the superhero world, and it gives the issue an organic political relevance.

As I said in the intro, the colors in this issue are perfect. Rachelle Rosenberg shades her heroine in bubblegum pink and cotton candy blue, and her choices in the action scenes are strong. I don’t know that Dazzler’s light blasts have ever looked better. Laura Braga’s pencils are turned up to 11 (only rock music reference I have, had to do it), especially in her faces. The joy on Alison’s face when she sings, her ambivalence when faced with a problem, and her renewed sense of fun when she fights are well-rendered and emotional. The art team does a great job distinguishing the cast of recurring fans, making them visually unique but clearly part of the same world. Braga and Rosenberg also give Dazzler a costume that feels both contemporary and character-authentic, with callbacks to many of her past great looks. Bandana, face paint, blue and yellow top; it’s all classic Alison. It’s the best look she’s served in a long time, and I’m hoping it sticks.

Dazzler is a character that’s easy to get wrong. She’s a badass hero who never feels like she fits in that world, but she’s also a born star who inevitably decides she should be doing more. Dazzler: X-Song leans into that contradiction and in doing so, tells the best Alison Blaire story in a long, long time.