“My name is Deadpool.  Maybe you’ve heard of me?  I had a pretty big comic run recently.” 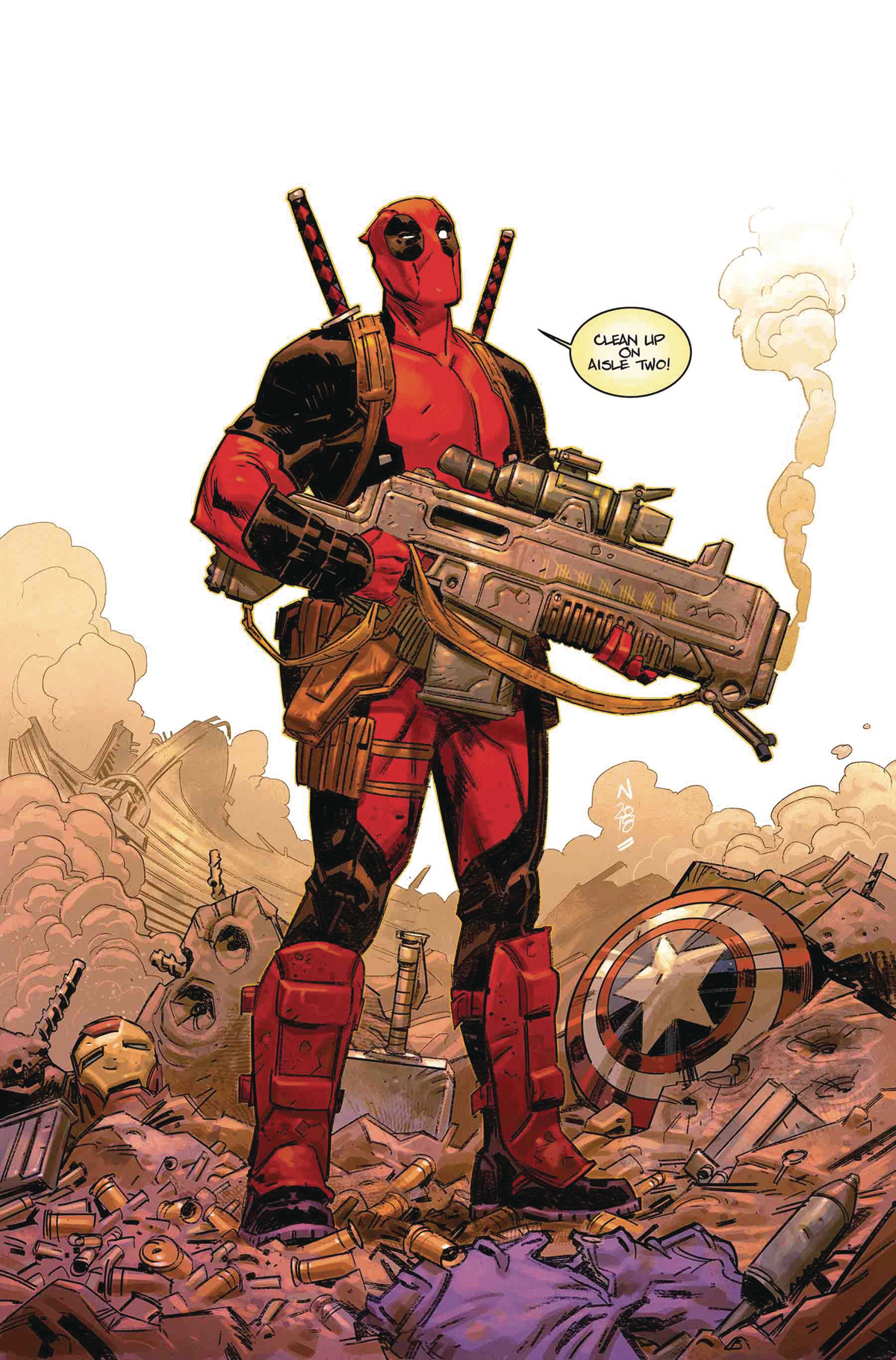 Fresh off of the heels of the blockbuster hit Deadpool 2, Skottie Young (Rocket Racoon, I Hate Fairy Land) and co. have a grab-bag of jokes and explosions for readers in store.  In this much anticipated inaugural issue, Deadpool goes to the movies, has a run-in with bikers and even reels the Guardians of the Galaxy into his tale.  Welcome to Deadpool’s world, we’re just living in it.

If you’ve read I Hate Fairyland, Young’s humor is instantly familiar here.  What’s most impressive here is the writer’s ability to channel a Deadpool that is familiar from recent character runs as well as the silver screen.  Some of the jokes land in perfectly Reynolds-esque fashion.  Let’s assume that it was Young’s decision to cover a naked Deadpool’s modesty with bluriness and the Deadpool logo.  Simple and hilarious, just like the entirety of this first issue.

Following the issue proper, Deadpool takes us on a journey where he wishes to explore his backstory, and no one tragic backstory is safe from prodding.  There’s even some across-the-bow shots at DC with obvious references to Superman and Batman’s origins.  At this point, one begs the question: In the case of Deadpool, do the movies take cues from the comics, or vice versa?

The artwork is somewhat scratchy and intentionally rough around the edges.  Nic Klein (Drifter, Viking) depicts Deadpool as a bit… crispier than previous character runs.  This is a little jarring as Deadpool spends about half of the comic nude or nearly so.  In less disturbing news, whether the merc is flying through a movie theater window or fashioning himself underwear made out of stuffed animals, Klein and his fellow artists do a great job of making Deadpool expressive despite the mask.

Verdict: Buy.  It’s the first issue of a new Deadpool run, and a #1 in Marvel’s Fresh Start campaign.  Of course you should pick it up.  You’re reading a Deadpool review, aren’t you?  Let’s assume you like to laugh and are not averse to adult humor and a little violence in your comics.  Let Deadpool take you to his absurd escapist world, you won’t regret it.