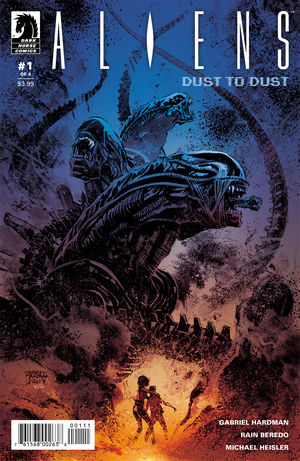 Everyone’s favorite zenomorphs have returned! Aliens: Dust to Dust #1  is the newest entry into Alien canon. This venture takes place on the Trono colony, LV 871. If that is gibberish to you, it’s OK. What matters is its a space colony. The colony is attacked by a plethora of the eponymous aliens. This story follows 12 year-old Maxon and his mother as they avoid the monsters standing between them and their spaceport extraction. The aliens pop out like haunted house spooks throughout the issue, though some of the moments are still able to make good use of the Aliens. The reader can tell early on this story is not going to have a happy ending. Maxon grows up a little this issue, but he will have to grow up a lot before he is off planet.

The story is very straightforward. Gabriel Hardman creates a hybrid disaster movie/alien movie. The questions of how or why now are not broached, and they may not be at all. The aliens are just the plot device here, similar to the “walkers” in Walking Dead. They keep family unit on the run, as they lose every hope or chance they gain. If you played Alien: Isolation, the beginning feels familiar, but in a very good way. The game was probably a better entry into the canon then some of the later movies, and it was a better call back to the horror of the first movie.

Hardman does a great job of being the writer and the artist, and the two facets of the comic run together smooth. The problem is the comic was very forgettable in the long run. It felt like an entry into the series for the sake of cashing in on the brand. It did not add to the understanding of the mythos of the creatures or help me better understand the toll they take on humanity. The story contains itself on a tiny space colony, and it does not aspire to grow from that.

Verdict: Pass. While I enjoyed the comic a bit, it did not stick with me. I didn’t get any beats with the mother and child to make me care about them more than any other nameless family duo in monster stories. They existed to fill the role of main character of the story, the story did not exit for them. Unless you are a die hard fan, I don’t see this series being worth your time.