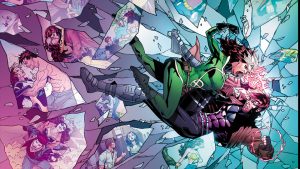 Rogue was the reason I first picked up comics and I have always had a soft spot for her relationship with Gambit. So, this standalone series by Thompson being nothing short of spectacular has been a relief especially as up until this series these two characters have barely interacted for a good couple years. This final issue does not fall short of the other issues.

Rogue and Gambit find themselves still (literally) fighting their past selves – because of well comics; but also, personal growth. This paired with a cool use of Rogue’s powers take up a majority of the comic, but Thompson uses the sequences to come to a conclusion on the contemplation and analysis of who these characters are both individually and to one another and it’s satisfying but also clearly evident that Thompson is a fan of these characters. The ending is resolute and gratifying as it ties up this storyline, but the new relationship dynamics could affect some storylines in other X-men books, yet it is not reliant on the wider X-men and Marvel universe to be enjoyable.

Perez’s art much like the story of this miniseries remains at a high level with the art creating a real energy, with clear and distinct lines and formatting; so, it is evident what exactly is occurring but with extra finesse. Rogue’s new power is depicted with such interesting almost ethereal visuals to create some standout moments in this issue. The colours by D’Armata are a standout as he seems to use the whole spectrum of colours, sometimes all at the same time, yet they blend seamlessly together to produce a fantastic visual.

Buy.  The trade is coming out in July so if you haven’t read the series you could wait; but this miniseries has been a great look at these characters, with some great art, but is definitely worth picking up even if you know little about the two.