In a slight change from our regular scheduled programming, I’m going to take a look forward today at the forthcoming – and inaugural – Portsmouth Comic Con. Located a stones throw down the south coast from the place I call home, Portsmouth is going to be opening it’s doors on May 5th and 6th (that’s next weekend for those of you not paying attention – best grab tickets while you can!) to a whole slew of comics creators, tv and movie folks, cosplayers and everyone else with a nerdy bent. I’ll be heading down myself, and would love to say hi to any Talking Comics friends who are also attending, just leave a comment below or drop me a line on social media and we’ll see about arranging a meet up!

In the meantime, here’s a quick look at some of the things I personally am looking forward to at the event, which has a very impressive line-up for its first time out: from the world of comics there is the first U.K. appearance in a very long time of Walt and Louise Simonson, who between them have worked on New Mutants, X-Factor and Thor. Louise will be appearing on a panel on the Saturday, titled ‘Comics First Lady’, which I’m hoping to check out.

Next up is Shelley Bond, editor extraordinaire and leader of TC favourite Black Crown, who have been putting out some very high quality titles since their inception last year, including Kid Lobotomy and Assassinistas. I’m especially looking forward to a diversity panel on the Saturday, which also features Alison Sampson and Shawn Martinbrough.

Other comics pros attend include Frank Quitely, Rafael Alburquerque and Ben Templesmith, not to mention Gene Ha, Declan Shalvey and Rob Williams, so the Artist Alley is going to be quite the sight – my bank balance is already quivering at the thought of it!

Although we are less than a week away from the Con at this point, the organisers are still announcing more guests, including Dr. Who writer Cavan Scott (Saturday only) and 2000AD stalwart Ian Edginton.
Moving away from the comics front and onto other nerdy pursuits, there will be special effects demonstrations over the course of the weekend, an entire floor dedicated to all things steampunk, and of course lots and lots of cosplay – if you’re really unlucky you can find me going my best hard-boiled detective!

On the celebrity front there will be appearances from “Games of Thrones” Ian McElhinney, Norman Lovett and Mark Dexter, both from cult Brit comedy “Red Dwarf”, and the voice of Scooby Doo, Marc Silk. There is even a free after party on the Saturday evening for anyone with a ticket – which I think is a rather nice touch! 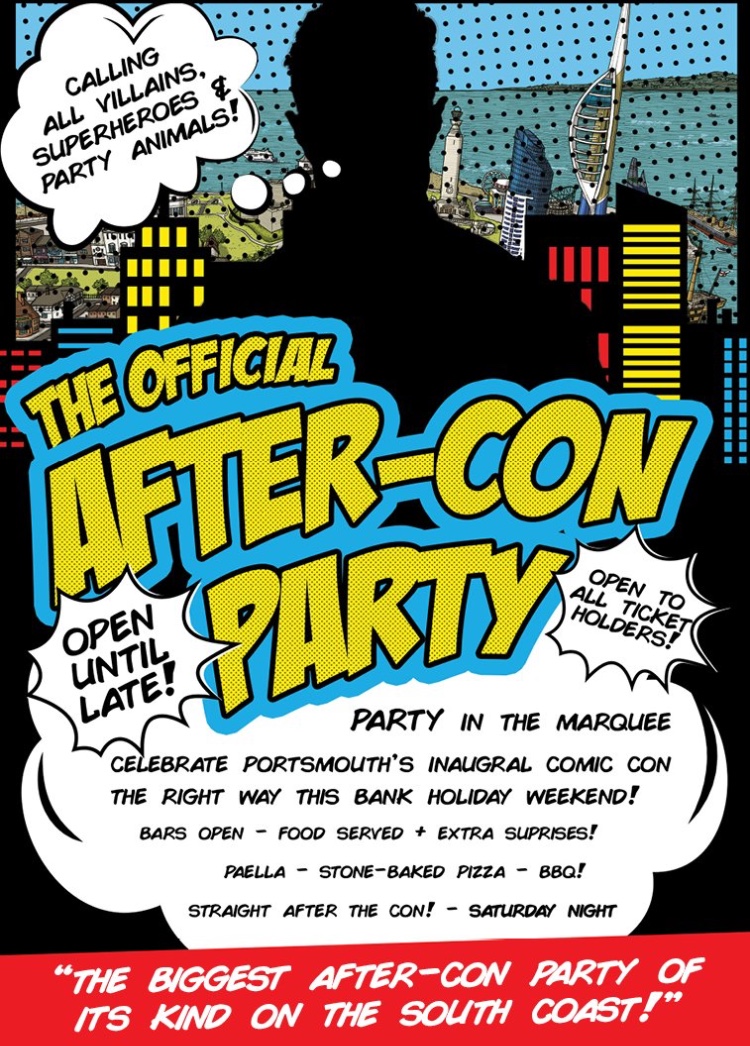 All in all, for their first time out I’m going to offer kudos to the event organisers for putting together such a stellar line up. Keeps your eyes peeled on social media next weekend for live updates, and I’ll be posting pictures, updates and hopefully some interviews, as the weekend goes on.

For more information or to buy tickets, visit www.portsmouthcomiccon.com