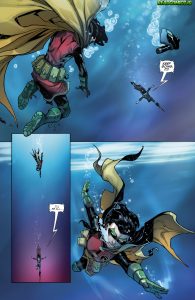 Life seems to repeat itself sometimes. Super Sons in its final arc has come around full circle as who should appear but the antagonist of the first arc: Kid Amazo.

We find out that Kid Amazo has escaped Lex Corp and is coming for the World’s finest younger counterparts. The dynamic duo are in their underwater HQ, where they are bickering about what mission they should do and whether Superboy should be stinking up the HQ with his noodles. This is once again a masterclass by Tomasi of how to write young kids as actual kids but not make them grating as characters. Kid Amazo breaches the HQ and the Super-Sons must fight him off whilst trying to reach some rebreathers so they do not drown. The fight proceeds in the ocean and it results in the two being separated at the end of the issue with Robin ending up with an unlikely member of the Justice League. The story is fairly simple but feels cathartic for the run and reflects the fun nature of these characters and the series.

Tomasi knows these characters inside out and it shows the dynamic between Robin and Superboy feels effortless and it is a joy to read. This final arc feels like Tomasi has been able to properly cap off the series, even though in my opinion the series should not be finishing. The underwater action is brilliantly choreographed, and a standout is that when Robin yells out for Superboy without a rebreather the wording comes out all distorted like when you are underwater.

Now the art, Jorge Jimenez is the definitive artist on this series with it just oozing fun. Barberi and Thibert don’t quite reach those heights, but only just not; the inking is light on the heroes and heavier on Kid Amazo whose suit is all black and brings a good contrast and a real sense of danger from the character even though this comic is mainly light-hearted. Furthermore, Barberi brings a real dynamism and fluidity to the underwater sequences. The colours by Protobunker are gorgeous with the purple, orange and blue hues of underwater making the largely empty backgrounds of just water do not feel blank but an asset to the story.

Buy. This series is brilliant fun but has real character depth and evolution; great for new and old readers alike.