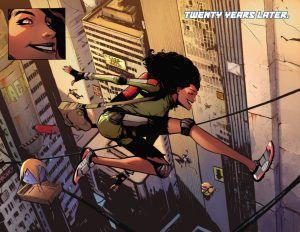 Many of the best ideas are simple and that is evident in Skyward; a world where gravity is significantly lower to the point where the moon’s gravity would feel constricting. Henderson elevates this premise with comic brimming with character, energy and interesting examples of how low gravity have affected the world.

We start out with a Dad (Nate) putting his baby girl Willa to sleep whilst Mum, Lily heads off for a run. This opening scene sets up Nate’s calm temperament and scientific mind and Lily’s kindness; but also, the relationship and caring between the two and within the family unit. This day though is the fateful day that gravity goes all topsy-turvy and many people just float off because they push off the ground too hard whilst walking. We jump to twenty years later, where Willa is a courier; like Mirrors edge, but with a fire extinguisher to help her manoeuvre. There is, of course, a cliffhanger to show and entice you as to where the story is going and as cliffhangers go Skywards isn’t a bad one; as it mixes the world and the family into an interesting circumstance.

The real star though is how Henderson creates this world and characters with such speed, but it does not feel like a pilot where it is just spewing exposition, but there can be a real warmth and depth to these characters evident already in this first issue. For example, Willa and Nates relationship is only shown in five pages and only in three of them are they actually conversing; yet the father-daughter relationship and the care for one another is immediately apparent. It is the small details that Henderson and Garbett include, but do not feel the need to comment on, that makes this feel like a real world such as the leashes used to make sure you don’t float away or that when Nate is working out his sweat floats away.

Lee Garbett’s art is spectacular if I was to compare it to anyone it would be a mixture of Jorge Jimenez with Riley Rossimo (the faces especially). The inks are well defined but never too heavy, there is such a fluidity and expressiveness to the comic and not just in the faces but in the smallest of movements by characters; which really enhances and brings a vitality to the issue. That in addition to Fabela’s stunning colours made this comic worth picking up for the art alone.

Buy. Skyward is a great example of how to write a first issue and how to effortlessly create an intriguing world that will leave you interested to find out more.