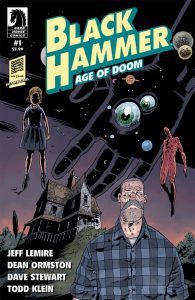 Black Hammer: Age of Doom #1 picks up right where Black Hammer vol. 1 left off. Lucy Weber has finally picked up her father’s mantle and become the new Black Hammer and she claims to “…Remember everything!” and she knows where the heroes are. Excited at this news are the lost heroes of Spiral City- Golden Age Crime Buster Abraham Slam, Interstellar Adventure Col. Weird, America’s Sweetheart Golden Gail, the Warlord of Mars Barbalien, and the mistress of the Macabre Madame Dragonfly. The lingering mystery of Black Hammer has been where are these heroes. Ten years prior they seemingly died as they sacrificed themselves to defeat the Anti-God and save their world. Unknown to their world the heroes didn’t die but rather they were mysteriously transported to a quiet country town where they were forced to keep their identities secret and assimilate into the town. After ten long years it seemed that the heroes were finally going to get the answers they’ve been searching for. Lucy knows the answers. She remembers. Then she is gone. 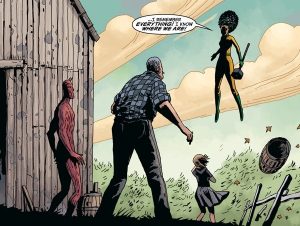 Lucy Weber, the new Black Hammer & She Has the Answers

Black Hammer: Age of Doom #1 continues the mystery. Faced with an uncertain reality our lost heroes decide they are finally going to get some answers as to where they actually are and how they can return home. Lucy, as the New Black Hammer, finds herself lost in yet another reality, the Anteroom. The Anteroom is home to all the monsters of the world, as well as the Ramones, who are putting on an eternal set for all their undead and horrendous fans in attendance. What is the Anteroom? Where are our heroes really? Questions that will no doubt come to light but like all good things it’s going to take patience.

Black Hammer Age of Doom #1 isn’t what I expected it to be but then I guess I really didn’t know where Jeff Lemire and Dean Ormstrom would take their comic. Never did I anticipate and nice clean story that answered lingering questions. I should have expected the gut punch that this issue was since Black Hammer has never been a straightforward story and happy endings are few and far between. What I am is invested and can’t wait to see where the story goes from here.