IDW is continuing its run of the young horror classics, Goosebumps, with Goosebumps: Download and Die!. If the name sounds familiar, the fourth book in the original Goosebumps series was Say Cheese and Die! and it was about a camera that caused those photographed to perish. This time, its a mysterious phone. Mitra is a computer geek with a crush and has a bestie who loves computers too. Her best friend makes a new friend, and Mitra is jealous of sharing the attention of her friend. (The crush is on a girl different than her bestie)

Her phone is broken, and she is unable to get a new one. Until a package appears at her door, addressed to her. It’s anonymous, and when she opens it, she finds a brand new phone, set up with the newest and coolest apps and tech, including emojis. The girls take a picture of a group of boys who take the computer lab free hours for two weeks. They put it on a lens feature that makes all the boys appear sick. The next day, the boys are all puking profusely. And someone else wants the phone… 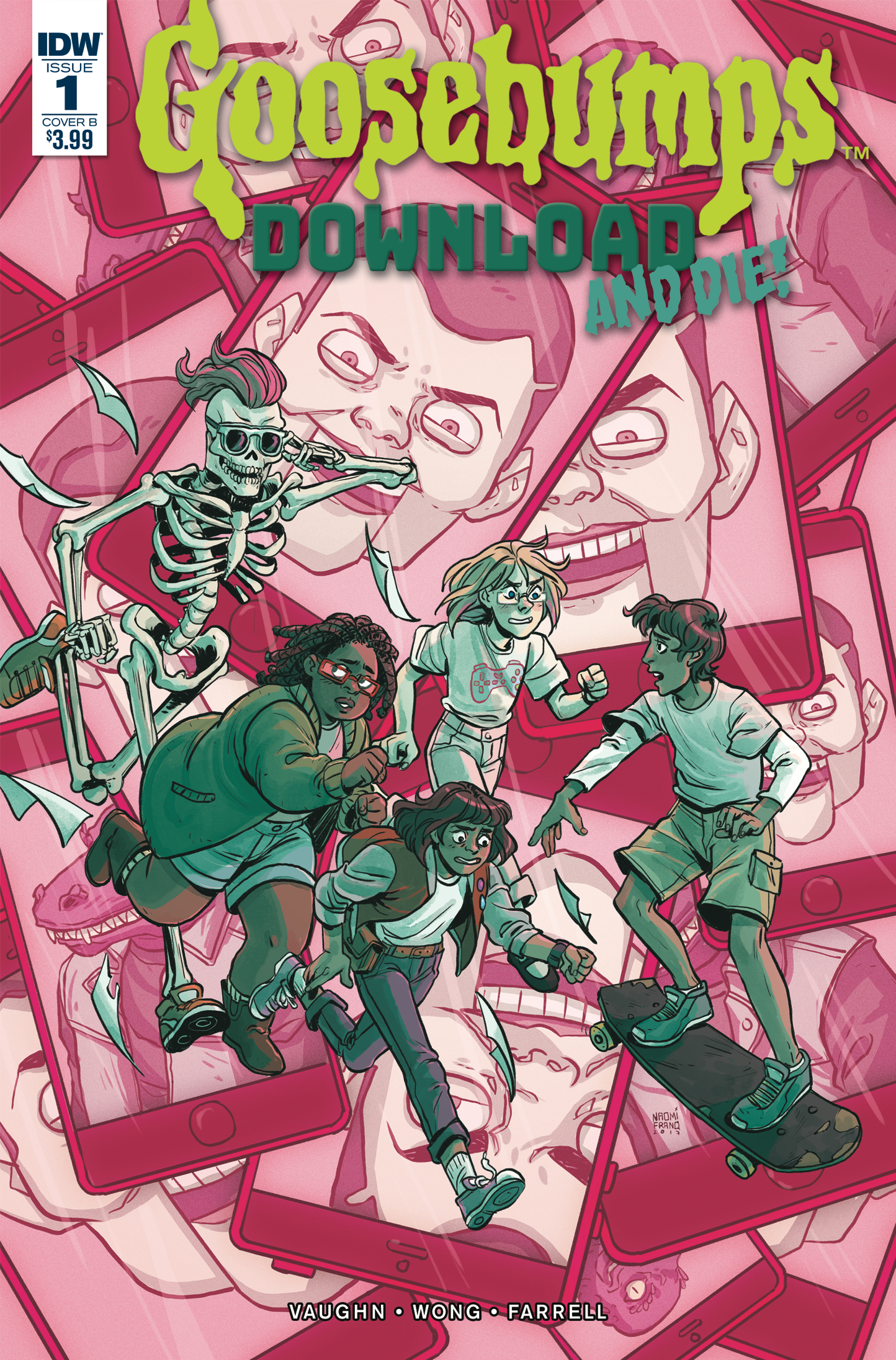 The book is very much in the vein of the Goosebumps books, but it has been well updated to the 21st century. There is more diversity, more tech, and the problems the characters face feel less like cliches. Overall, the story is better paced than the previous GooseBumps book: Goosebumps: Monsters at Midnight. The first issue of that series was slow, taking its time to get the horror started without providing a lot of character development. This comic has enough subplots setting up, that I forgot about the premise and just wanted to know what was happening in Mitra’s personal life.

The book is well written, and I was thoroughly immersed in the tale within a few pages. In this book, there are multiple character relationship dynamics, and I think this comic could play out longer than they will give the mini-series. Jen Vaughn did an excellent job with character development and story set up in this issue. The development was plot and action, not just perfunctory statements and explanations. The art was executed in the playful style of IDW, but I could still sense the Goosebumps story connection, even if it bares no obvious style connections to Tim Jacobus, who did the original covers. The colors are darker, when necessary, but they still are playful, which is important in a young adult horror series, in my humble opinion. The downside, this story may be better as a trade. The wait for the next issue is killing me.

Verdict: Buy! This comic is great for those who loved Goosebumps’s books, shows, or movie. And if you didn’t experience them, it will make you want to go back and do so. It was more fun and better executed than a lot of young adult and horror fiction out there, and I can’t wait to devour the next issue.