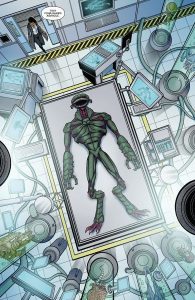 Asthma sucks, at least that is what I have been told by my younger sister, as I am fortunate enough to not have to worry about pollen counts or wheezing. Scout, on the other hand, has asthma and it’s costing her an arm and a leg.

Scout is a biologist/scientist who is tasked with dissecting aliens. Whilst she is performing one such autopsy, an accident results in a possible cure for asthma, maybe. The rest of the story by Pat Shand deals with the alien culture and this new weird world that Breathless inhabits; with an introduction to a very chatty lab assistant Grace-Eisley and an end reveal that brings a whole new action, horror dynamic to the comic.

Overall Shand does an admirable job of introducing this world whilst moving the story along at a brisk pace. The characters feel a little stiff at times, but this may wane over the future issues as a lot of exposition occurred in the first issue. There are two main story plots- the alien and the asthma; personally, I found that I struggled to care about the asthma aspect, with the editorial at the end made me think about the issues surrounding asthma than the issue. This could change in future issues though. The alien part though is intriguing and enough to make you check out the next issue.  Overall, this first issue feels like a good average pilot, there promise and a good premise, but it did not blow me away.

Rodriguez’s art has some liveliness and good cartooning but suffers the same problems of the story of some awkward poses and pacing in some parts of the comic. The sections with the aliens though are great and dynamic, and the faces are very expressive with some great inking and crisp colours and line work that makes the art at points a delight to behold.

Wait. This seems like a prime target for a trade wait, there are some great set up and ideas at play but nothing so spectacular to necessitate you pick it up immediately.