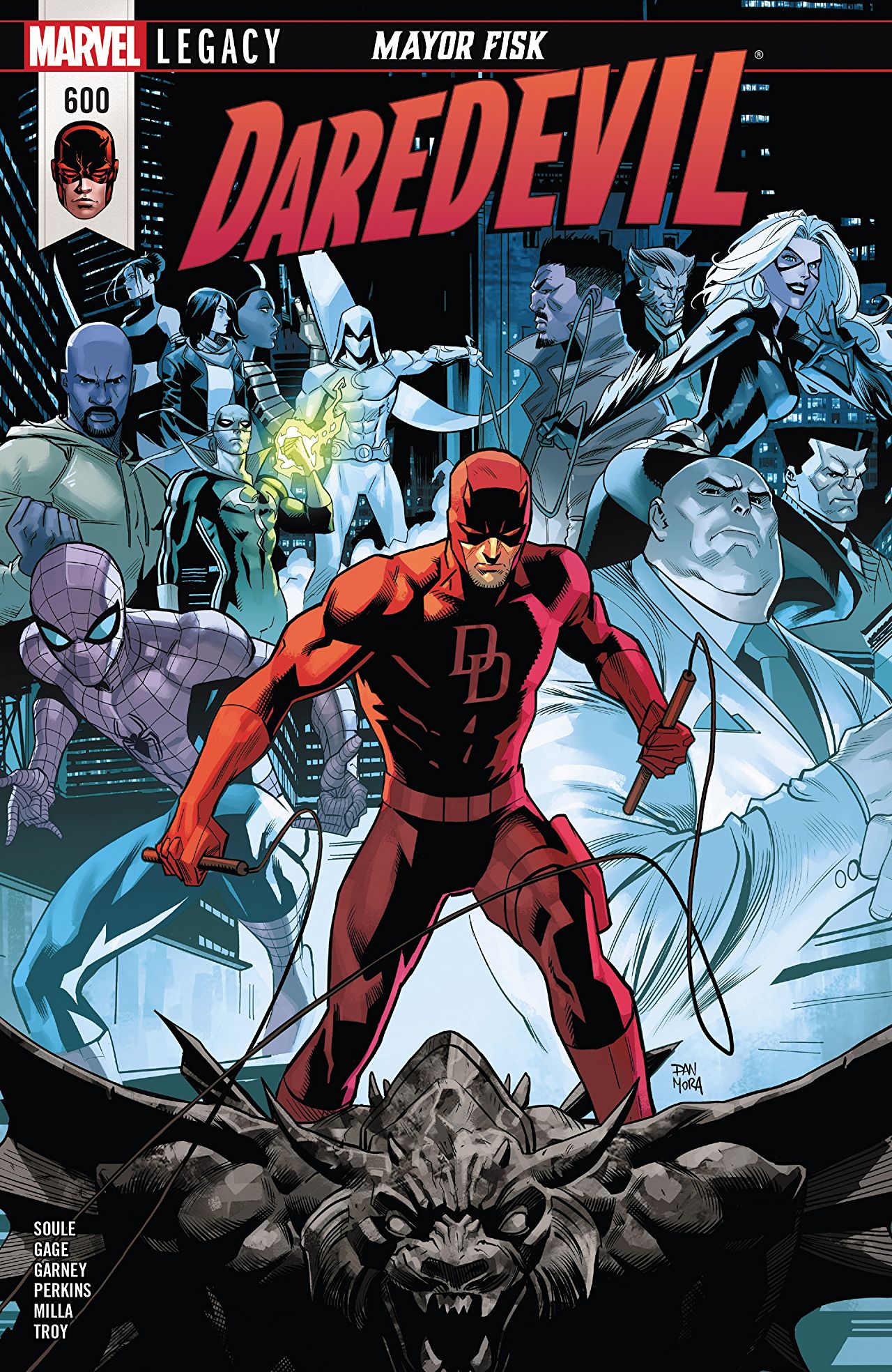 Previously in Daredevil, Wilson Fisk, a.k.a. Kingpin, has been elected mayor of New York City. Matt Murdoch accepted the appointment of Deputy Mayor -keep your friends close, your enemies closer. However, Kingpin has his own reasons for the appointment keeping Murdoch swamped with paperwork. Meanwhile, Blindshot has returned to NYC as an ally to Daredevil. He was previously blinded by Muse, but has regained his eyesight. Muse has returned to the field, creating murals of superheroes all over NYC inciting Fisk to fits of rage.

This issues begins as Daredevil has gathered a group of Hell’s Kitchen’s Heroes: Luke Cage, Iron Fist, Spider-Man, Jessica Jones, Echo, Misty Knight, and Moon Knight. Daredevil explains his goal to the group: Give the governor of New York reason to impeach Mayor Fisk. And, he explains to them the plan, connect Mayor Fisk to a group of crime bosses who he plans to appoint to important positions in his cabinet. The twist is that the group questions the viability of the plan. Won’t the police just arrest the vigilantes because of Fisk’s new law? However, Daredevil convinces the group that their role is to make sure that the police catch Fisk with the criminals and they will put the crime bosses behind bars.

While Daredevil makes his master plan, Blindspot is locked in hand-to-hand combat with Muse. The battle is brutal and violent. The pain is felt when Muse twists Blindspot’s arm threatening to remove his tongue this time. Unexpectedly, Blindspot gains access to a larger power, called “The Beast”, which gives him the power to defeat Muse. Blindspot refuses to kill Muse which angers The Beast.

Final Impressions
The art in this story beautifully captures the classic, superhero team up, crime story. The crime aspect has layered meanings. Fisk is connected to organized crime and superheroes are seen as vigilantes, which is a crime under the Fisk administration. The Muse Vs. Blindspot, and, the Fisk Vs. Daredevil confrontation is what makes this story interesting. The rest of superheroes are used for filler and are not a meaningful part of the story. The pencil work captures the street-level vigilantes’ outlines perfectly. Charles Soule has captured the voice of Daredevil perfectly. He’s tortured by guilt and so he’s fixing the city’s problems. However, Daredevil’s plans backfire in a way he could not have predicted. I highly recommend this book