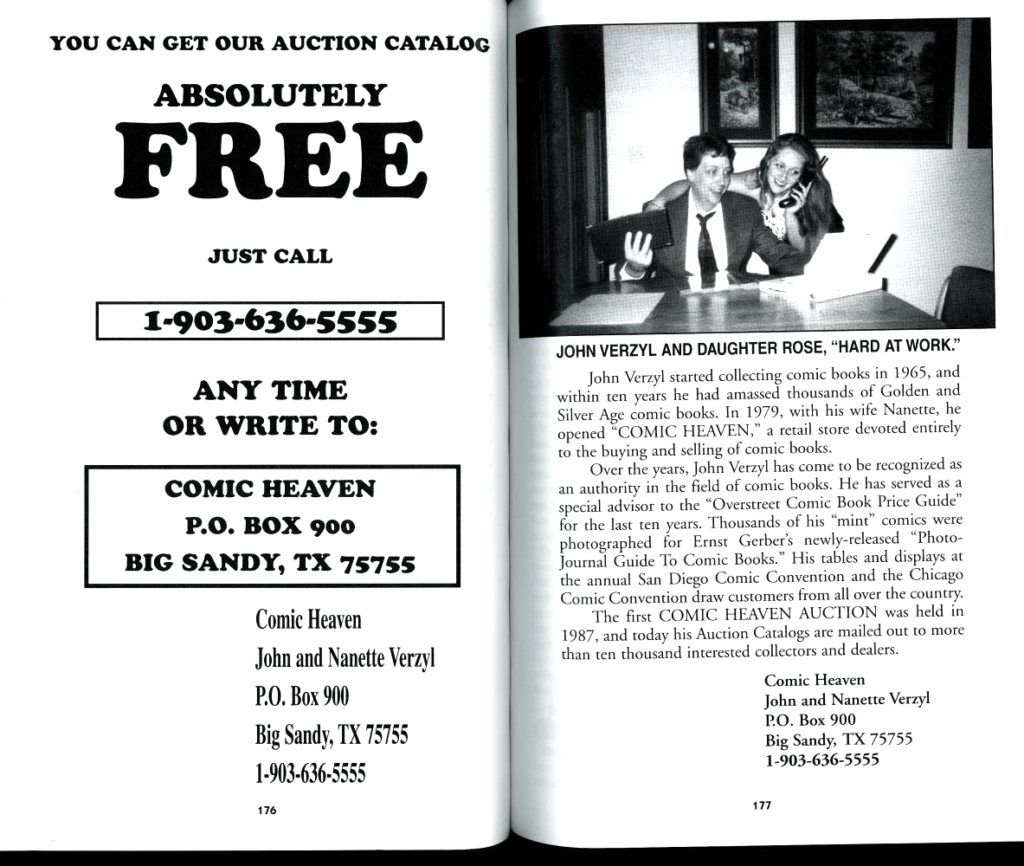 The comics-collecting community lost one of its titans last weekend, as my friend of over 35 years, John Verzyl, passed away suddenly at age 57. He was the driving force behind Comic Heaven, first as a retail store in California, one that eventually became home base for one of the most all-encompassing comic auctions in the industry. The ad alone for the auction would fill over a dozen pages in each year’s Overstreet Price Guide (for which John worked as a consultant for more than three decades!), and the actual catalog for the bidding was often the size of a trade paperback.

John Verzyl was a fixture at all the major conventions such as NYCC or the San Diego Comic-Con, with his spectacular display of rarities a highlight at each of them, as he had amassed perhaps the finest collection (both personally and as retail stock) of Golden Age books, and Timely Comics particularly, in the world. Even with that behind him, in his heart, John was still the little boy whom his brother Frank (owner of Long Island Comics) had started on collecting comics when he was but 4 years old, and so he treated even the “dollar-box” collector with the same respect as the highest of high-rollers.

If you visited his booth, John was never at a loss for a engaging tale about a comic book, character, or creator, dispensing wisdom with the gentle ease of your favorite school teacher but with the timing of a master comedian headed for the punch-line. It was sometimes difficult to get close to John’s actual tables, as a sizable crowd would be gathered, much like kids at a campfire, enthralled by an anecdote about a long-ago comic or creator.

I could fill pages with my own stories about John Verzyl, whether watching him prepare for his auction with his brother Frank over some very late nights and early mornings, ferrying the rarest-of-rare books to collector’s vaults or researcher’s offices, but I’ll keep it simple with this brief tale that I believe shows both John’s passion to do things the right way as well as his impish sense of humour.

Back during the “speculator boom”, there was a convention at the Nassau Coliseum here on Long Island, with a goodly number of “hot” creators and major vendors on hand. John was in from California to make some deals, and he brought Frank and I along to the show. As we entered, we noticed that there were a couple of tables set up near the exit where they were handing out “Certificates of Authenticity” for the books that patrons had gotten signed on the show floor.  John mentioned that this was odd, as how could they tell who signed what, and chuckling a bit, we all moved on. After a few hours dealing, we started to head out past the “CoA Checkpoint”, when John got this gleam in his eye. The fellow at the table, seeing John with some older books in his hands, asked:

“Did you get anything signed that you need a certificate for?”
“Yes, as a matter of fact” replied John, “I had this Daredevil #7 signed by Wally Wood. Can you give me something for that?”
“Absolutely–here you go! Thanks for coming!”
“You’re welcome!” responded John, and off we went.

Now, considering that Wally Wood had shuffled off this mortal coil some twenty years prior had no impact on the friendly but clueless chap at the table, it certainly made for a great conversation amongst the three of us on the way home, not only for the laughs, but in a serious vein about the changing nature of the collectors’ market.

John Verzyl leaves behind an amazing legacy as a collector, a dealer, a friend, but most importantly, a father and family man. His love for all things comic book related, not only the product itself but his shared passion with those who collect, will be nigh-unto-impossible to replace. Our condolences go out to John’s daughter Rose, son John, wife Nan, brother Frank, and his long-time assistant Yolie; the thoughts of our entire Talking Comics community are with you and yours today.