Comics Mysteries: Tales of the Unknown
All that glitters is no longer…the Golden Age? by Mike Antonucci

Here’s a comic-book trend that I would call, at best, icky. As I hear it from people on the auction and dealer side of comics life, the market for Golden Age books is drying up. Because it’s literally dying out.

The strictest boundaries I’ve seen for the years of the Golden Age are from the Overstreet Price Guide: 1938 to 1945. Let’s go with that for now. Who would the average collectors be for that era of material? Forget big investors. Forget the comics disciples who seek and stockpile across all epochs. Just consider the folks driven by a lifetime of reading and perhaps the biggest driver of pop culture treasure hunting: nostalgia for their childhood.

Anyone who was 10 years old in 1945 — so, maybe three or four years into a love affair with the Golden Age aesthetic — would be in their 80s now. They’ve spent decades reacquiring books to which they’re sentimentally attached. Decades filling in runs of titles that were within a middle-class budget. But they’re wearing out now, and yes, dying. There are no younger waves of collectors who are going to have the same Golden Age passion. 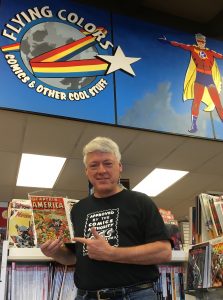 “Part of the allure of collecting old comics,” says Northern California shop owner Joe Field, “is the nostalgic buzz they bring — remembering where you were when you first read the comic, who you were with, and how much simpler the time was.”

“As a long-time comics retailer,” continues Field, the inventor of Free Comic Book Day, “part of my job is helping fans find the comics that connect them with their youth. The sad fact is many Golden Age fans are ‘aging out,’ to put it politely.”

“There will always be a kitsch value to Golden Age comics,” adds Field, who runs Flying Colors Comics, “but the concentration of interested buyers will remain with the characters and creators that continued into the Silver, Bronze, and Modern ages.”

The high-end Golden Age market probably will keep accelerating. The most famous books, the rarest books, and the “key” issues will generate record auction prices and that in turn will be interpreted by some as evidence of unflagging demand (and particularly by those who are deeply invested in Golden Age books). But it’s what won’t be in evidence — the browsers at the longboxes for Classics Illustrated and Four Color — that will signal a poignant generational shift.

The seductive mystery that underlies this entire historical panorama is the way comics collecting was so unanticipated. When Action Comics No. 1 dropped, it was not a commodity. All the comics scattered throughout my barber shop in the 1950s were read and re-read until the covers fell off. Sure, there have been some lovingly accumulated, carefully preserved, and now famous stashes of vintage titles discovered since comics started getting talked about as stock-like assets. But it was the rare individual who foresaw the future rarity and desirability of Pep Comics and Weird Fantasy.

Here’s a challenge: can you look around right now at the pop culture world of kids 7 to 12 and feel sure about what to hoard — toy-related, tech-related, advertising-related, or fashion-related — that’ll fatten your bank account when they are looking back 30, 40 and 50 years from now? You can count on them being nostalgic, but for exactly what and what price?

The point is not that we should all become speculators trolling Walmart and Target. Instead, it’s about the bewitchery of our yearnings. Collectors often struggle to explain the magic that objects hold for them, but they’re fully aware that they’re possessed. Happily possessed, to boot.

On my most recent trip to the comics store, I went in looking for current Batman issues. What I bought was a well-worn copy of Action Comics No. 389 (June 1970) because (a) it had a 15¢ cover price that sparked all sorts of allowance memories from when I stood in front of spinner racks, and (b) it had a baseball-themed cover with a reference to my childhood sports idol, Mickey Mantle. If I’m lucky, I’ll be around to keep the Silver Age baby-booming for another 15 to 20 years.

At some point, I plan to look up from the longboxes and check on what they buyers born at the turn of the 21st century are collecting.

PS: The column  before this one, on the mysteries surrounding the first dedicated comics stores, provoked intense reactions from some retailing pioneers. Lots of intriguing information has emerged, and I will be following up on all of it for a second column on the topic sometime relatively soon.