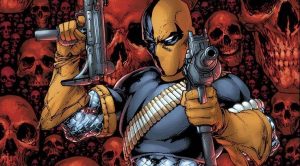 Deathstroke #29 feels like an ending and a beginning. The ending comes the sense that it feels like Christopher Priest has been building to this moment since he took over the title with Rebirth: Deathstroke #1 almost two years ago. Many of the subplots are tied up with this issue as do many of the overarching storylines of Slade and his relationships with his children, which has really been the core of the book so far. We have satisfying conclusions to both Rose (Ravager) and Joey (Jericho) Wilson’s story with their father. Even Slade’s longtime assistant Wintergreen and Slade’s ex-wife Adeline get what they want from Deathstroke for everything he has been to them as well as done to them. Yet it is a beginning since the ending of the issue opens so many possibilities of where Deathstroke can go from here.

Deathstroke #29 culminates the Chinatown storyline that concludes Deathstroke’s time with Defiance, his super team aimed at redeeming his long history of ‘evil’. Deathstroke finds himself taking on the White Lotus criminal organization, China’s New Super-Man, a pissed off Terra as well as his children Rose and Joey and former ally Dr. Icon. For most people this would be trouble, but Deathstroke is a master strategist who can use over 90% of his brain and…. it’s still trouble. Deathstroke #29 is full of action and more action. It’s a enjoyable conclusion of everything that has come before it and leaves the reader wondering what’s to come as Deathstroke goes in a new direction.

I never thought I would be reading a Deathstroke comic. I appreciated the character when he played a major role in the New Teen Titans of the ‘80s but never bought into his staring role in his self-titled series of ‘90s during the anti-hero phenomenon. Nothing about the New 52 versions made me want to try it out, but with Rebirth there was finally a pull toward the title and that was Christopher Priest. Christopher Priest crafted one of my all time favorite comic book runs with his work on Black Panther. When I saw his name as writer of the new Deathstroke title I decided to give it a shot and I am glad I did. Deathstroke has been one of the most enjoyable DC comics on the market. It’s been a hell of ride with classic non-linear Priest storytelling and long form plot threads that take time to payoff but when they do it’s worth the wait. Deathstroke #29 does feel like a conclusion of sorts but I have no doubt that as long as Priest is writing this book that it will be a fun and compelling read.

Verdict: Deathstroke #29 is a satisfying conclusion to the Chinatown and Defiance storylines and yet another fine issue of a wonderful series. Deathstroke is on of DC’s best series and something all fans of great comics should be reading.