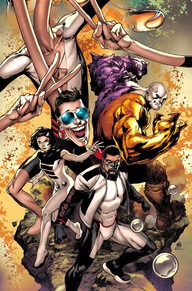 Spinning out of Dark Knights: Metal comes the Terrifics. The discovery of the Dark Multiverse has sent ripples throughout the DC Universe. It’s also opened the door for exploration and discovery. Enter the Terrifics, a team comprised of Mr. Terrific, Metamorpho, Plastic Man, and Phantom Girl. Heroes apparently tasked with exploring the Dark Multiverse as they become trapped within its confines.

Jeff Lemire has arrived at DC and he has arrived in style. The Terrifics #1 was an enjoyable first issue that quickly grabs the readers and takes them on a thrill ride. The Terrifcs #1 is very reminiscent of a Fantastic Four story, especially the ones where they become trapped in the Negative Zone. It’s also not lost on me that the composition of the Terrifics has a likeness to Marvel’s first family, with a brilliant leader in Mr. Terrific, a prankster superhero (Plastic Man) who seems to enjoy picking on the ‘monster’ of the team in Metamorpho. Rounding out the team and its female member with invisibility powers, Phantom Lady. Marvel might not be publishing Fantastic Four right now but apparently DC is taking a shot at their own team of hero adventurers.

Joining Lemire on storytelling duties is DC mainstay Ivan Reis. Reis’ artwork is at it’s very best here. It’s deep and rich with incredible detail. Once in the Dark Multiverse it becomes apparent that Reis is having a lot of fun with the other worldly qualities and the cinematic feel to the pages. Unfortunately with Bendis’ arrival at DC Reis will soon jump from the Terrifics to Superman but with Evan ‘Doc’ Shaner coming aboard and Lemire staying put I think that the Terrifics will be in good shape for some time to come and a book that will continue to put a smile on my face.

Verdict: The Terrifics #1 was a stellar first issue. It had enough background and character background to draw the reader in before it’s full throttle into the Dark Multiverse and a new age of exploration. I finished the Terrifics #1 wanting more and that is always the sign of a great comic.