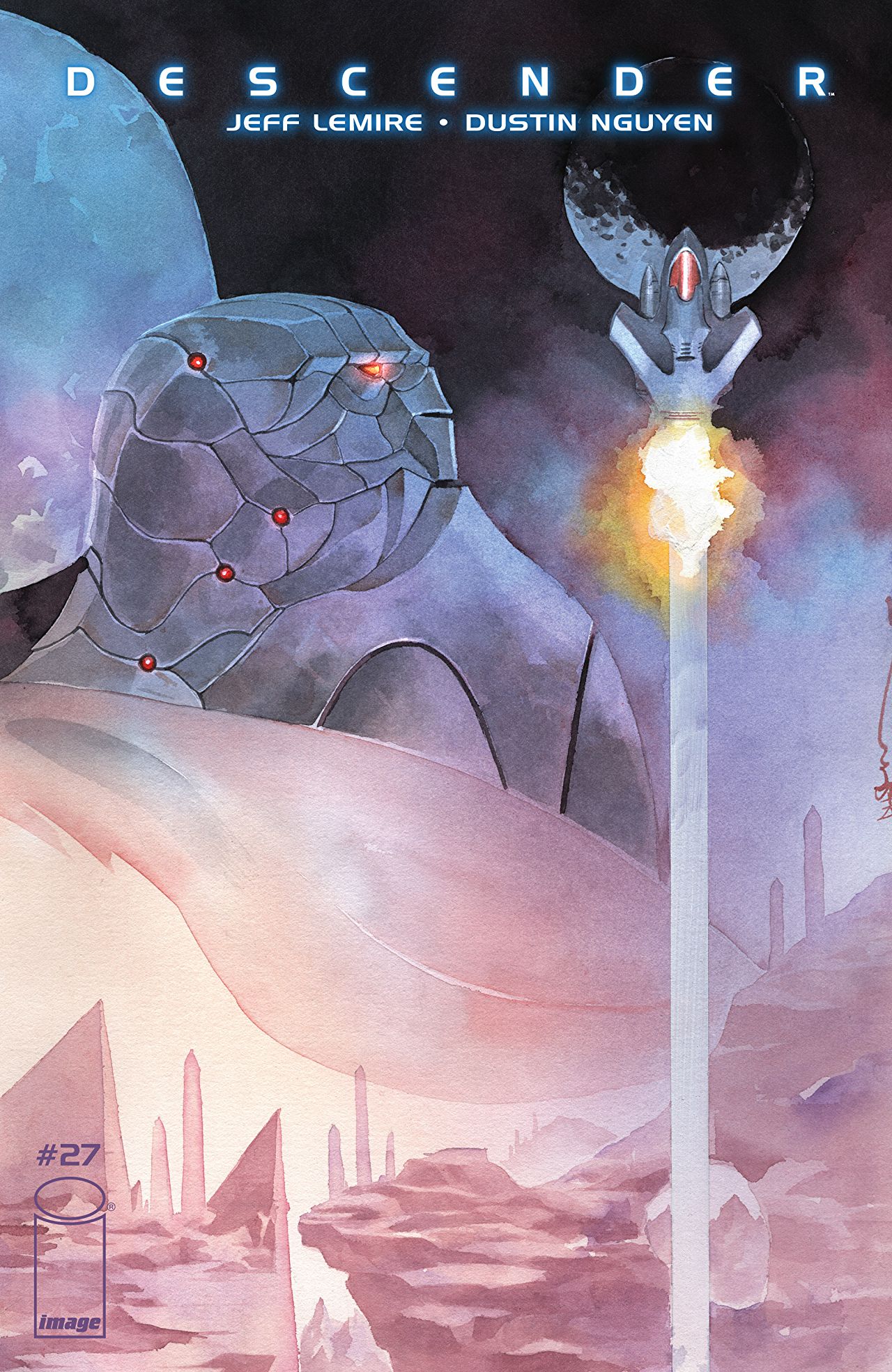 Letters and design by, Steve Wands

This story is set four thousand years ago within the continuity of the Descender universe. Professor Osris and his assistant, Kelick, are shown preparing to depart on an exploration to locate new life when the book begins. Professor Osris is constructing a letter to his son in which he expresses his motivations for leaving the planet on this exploration and what he is hoping to accomplish. He states, “instead of being trapped by the past I will make history.” He’s leaving his home planet of Ostrakan for two reasons: to search for life outside of Ostrakon and to promote the planet’s growth which has been stymied by the myths of the ruling religious system on the planet. Professor O says goodbye to his wife,  who supports his decision, and their infant son before leaving.

As the story continues, Osris and Kelick make great progress with their experiments and they are using less energy in the spaceship than they calculated. Eventually they encounter an energy source that leads them to a ship. They are transported to a robot planet. Professor Osris demonstrates a commitment to discovery and reliance on scientific method throughout. For example, when they discover the transports connected to the strange ship inside the energy source, Osris leaves his weapons behind; Kelick takes one. In addition, Osris recognizes the transports as having been sent for them to transport to the planet. He prompts Kelick to recognize the evidence right in front of them, versus assuming that it’s a threat to their personal safety.

The art by Eisner award winner Dustin Nguyen continues to highlight and support the emotional tone of the book. The space sequences feel expanded, vast, lonely with a sparkle of mystery created by distant objects. The robots feel cold and metallic. The warmth coming from Professor Osris when he discourses on science can be felt and supports the exposition.

Ultimately, the pursuit of knowledge and the search for new life is an overused plot device in science fiction. Adding to this, Osris holds fixed beliefs that disparage the religious community on his planet. This too is a trope. However, within the context of the Descender universe, which includes the existence of Harvester robots that destroy almost an entire world’s population, this is an interesting starting point. In addition, the premise of this new story arc, the origin of the harvester robots, is compelling given Osris’ initial discovery. Life on the planet he discovered was manufactured and is not organic. So, who created the robots?