(This is the first in a series of articles by Mike Antonucci, a longtime journalist known in part for pop culture reporting. The more feedback and input these stories bring, the better, because they’ll mostly focus on elusive, lost or uncertain history involving comic books).

What About Bob (Sidebottom)? 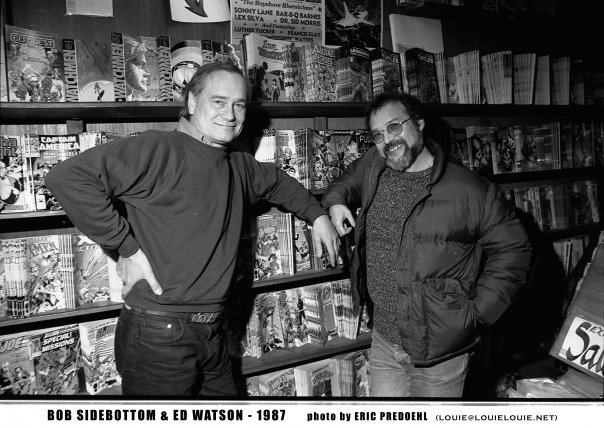 Comic-book history is replete with mysteries, and one of the most intriguing involves a retail pioneer who has been dead for almost 25 years.

Bob Sidebottom, just 57 when he passed away in late 1993, was a native Californian who became a minor icon in San Jose as the proprietor of a comics shop that dated to the 1960s. His obituary in the local newspaper noted he was an amateur cartoonist, a jazz devotee and “curmudgeonly” — colorful stuff that reminded people there was more to regional culture than Silicon Valley.

Today that obit, notably included as part of a Facebook tribute page, stands out because of a perplexing assertion. In recapping Sidebottom’s life, it stated that he first opened his store in 1966. If true, that would be a very early date for the existence of a dedicated comics shop and would represent an important historical data point for the industry. But some diligent efforts to verify the information have been without success. So far, the skeptics have the stronger case.

Facts about pop culture history are often elusive, and Talking Comics has been a great place for conversation about classic who, when and whys. As a podcast listener, I loved the episode about the behind-the-scenes details revealed in the documentary “Doomed: The Untold Story of Roger Corman’s The Fantastic Four.” As a contributor to a “Special Edition” with Bob and Stephanie, I was able to bring attention to the never-recognized creator of a legendary toy, the 1965 James Bond attache case from Multiple Products.

The best I can do with the Sidebottom case is explain why the claim to a 1966 breakthrough — which would be the beginning, basically, of comics having a place of their own on Main Street USA — carries some plausibility. 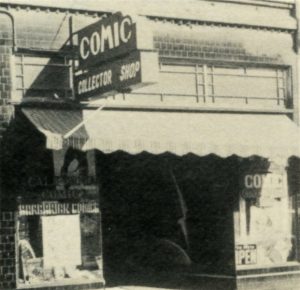 That newspaper with his obit was the San Jose Mercury News, where I worked for more than 31 years, and the writer, Laura Kurtzman, was a highly regarded colleague. What she reported was that Sidebottom opened his first store in ’66 at a location on Alum Rock Avenue and didn’t move downtown, where he built the reputation of the Comic Collector Shop, until two years later.

That specificity is the tantalizing part. In short, Alum Rock leads straight into the vicinity where Sidebottom ended up, and the timeline jibes with a commonly cited 1968 date for that downtown spot. It’s a reasonable scenario. When I caught up to Kurtzman two or three years ago for a chat, she couldn’t remember the source of the information about 1966, but she raised the obvious issue: A detail that exact didn’t come out of thin air. But was it accurate? If so, it would be awfully cool. We’d add the launch of the store to the year TV brought us “Batman” and “Star Trek.” And “Our Man Flint” and “Fantastic Voyage” in the movies. Even better, a little ballyhoo about it might bring more information out of the woodwork.

The problem is, no detective work has offered any confirmation. Neither Sidebottom’s widow or daughter know anything about what was happening in 1966; a San Jose reference librarian couldn’t find any evidence of a Sidebottom business on Alum Rock Avenue (but did note that his residential address was elsewhere and not the source of confusion). Two Sidebottom friends were blank on that era.

By contrast, it’s relatively easy to do research on other seminal shops, 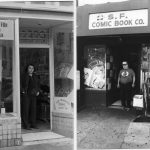 such as the late Gary Arlington’s San Francisco Comic Book Company, that mark 1968 as the big liftoff year. Wikipedia, by the way, brooks no nuances by flatly declaring Arlington “as owner of America’s first comic book store.”

History regularly needs correcting and updating. There’s almost always more to know about something, and occasionally something to know that we didn’t even realize was a possibility. Do comics and pop culture now seem to be taken seriously as social and economic influences?

Just wait. Their omnipresent impact is going to spawn decades of journalistic features and academic study.
The first comic-book store? Bob Sidebottom’s true legacy? Some bad info begetting useless investigation? My guess is somebody knows something more. I don’t know whose memory or what archive it’s buried in. Or what it will tell us. But I’m betting Wikipedia will need revising.