Dark Knights Rising: The Wild Hunt is a dense read. Unlike the rest of the Dark Knights Rising titles that tell the tale of how the Bruce Wayne’s of the Dark Multiverse were corrupted and assumed identities of their JLA cohorts Dark Knights Rising: the Wild Hunt pits these corrupted Batmen against the last remaining heroes of the DCU. The Flash, Raven, and Cyborg are in a mad race to reach the Hall of Heroes, where they can summon the greatest heroes of the fifty earths, in an attempt to gain allies in the war with Barbatos and his Dark Multiverse encroachment into the light. On their tail in a commandeered Carrier with a Dark Caged Baby Universe for an engine are the Dark Knights. This would be a big enough story but since this is a special penultimate issue of the overarching Dark Knights Metal event there’s also a healthy dose of apes, some mad scientists, and androids thrown in for good measure. Believe me, Dark Knights Rising: the Wild Hunt is a hell of a trip.

On the Run in Multiversal Bleed in The Ultima Thule

Scott Snyder, James Tynion IV, and Joshua Williamson’s names are on this issue as writers but it feels like Grant Morrison had the majority say in the content as this issue could easily fit into his Multiversity event of a few years ago. Present is the Ultima Thule, shiftship to Uotan the Superjudge, last of the Monitors and protector of the Multiverse. Any reader of Multiversity will recognize this right away as will the mention of the Hall of Heroes, home to the Multiversity, heroes of fifty earths tasked with protecting the Multiverse. This is where the Flash, Raven, and Cyborg are attempting to reach. They are desperate and out of choices and if they can obtain any help they might stand a chance against Barbatos and his Dark Multiverse. Monitoring the heroes desperate race from Black Hawk Island is a collection of scientists including Will Magnus, Professor T. O. Morrow, Sivana, and even Egg Fu who have come to the realization that the scientific laws of the universe are broken and as Red Tornado informs them that all is probably lost. Luckily Detective Chimp is among them and he has hope and he also has friends willing to help from Earth 53….Yes, there is Earth 53 and it looks fantastic. 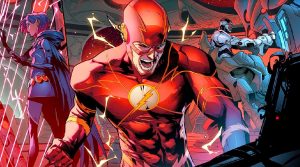 The Flash is of course at the Center of any Crisis

I thoroughly enjoyed Dark Knights Rising: the Wild Hunt but I’m also a fan of every part of the DCU brought into the issue. I loved Multiversity and have always treasured the DC Multiverse. I like Detective Chimp and the animal analogs of the DCU (hell I read the entirety of Captain Carrot and the Zoo Crew and I’m not ashamed to admit it), and the idea of a Multiverse of heroes coming to the rescue harkens back to Crisis on Infinite Earths and it is fitting that the Flash is aboard the Ultima Thule and the center of this new Crisis. Even the site of the Carrier (or rather a Carrier) from my all time favorite The Authority brought a smile to my face. But the pure genius of the Dark Knights Rising: the Wild Hunt is that you don’t need to know any of this comics history to enjoy this comic. You could come in with just knowledge of Dark Knights Metal and enjoy this issue. But for fans of DC history, there’s a little bit more for you. 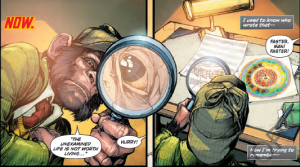 Detective Chimp & the Multiverse Map? Why Not

I do wish that Dark Knights Rising: the Wild Hunt had been consistent on art. As individuals Howard Porter, Jorge Jimenez, and Doug Mahnke are great artists but when working in concert they do not flow nicely. I would have liked to see Jimenez take the lead as his vibrant and dynamic artwork fit perfectly with this story and his pages were by far the ones that stood out the most. It’s nice or rather fitting that Grant Morrison would return to the main DCU with this issue, as it is very much an intentional sequel to Multiversity and reads very much like a ‘Morrison’ comic.

Verdict: Dark Knights Rising: the Wild Hunt is an obvious buy for everyone reading Dark Knights Metal but is the best of the Dark Knights specials and is a fitting return of Grant Morrison and buy for anyone whose missed his high concepts and deep knowledge of DC history.