Jean Grey is a character that’s always been defined by external factors: namely, the fulcrum of a love triangle with Cyclops and Wolverine and the primary host of the Phoenix Force. What’s so remarkable about Matthew Rosenberg’s Phoenix Resurrection #5 is how it manipulates our expectations of Jean’s classic roles while simultaneously redefining her as a standalone character in her own right. She’s at last in a position to become the heroine her time-displaced counterpart, various clones and temporary incarnations, and nostalgia-blind teammates always claim her to be. 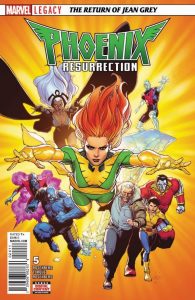 Rosenberg has filled Phoenix Resurrection with a foreboding tone and multiple mysteries, and the final issue effectively cashes in on that setup. (Old Man) Logan confronts Jean in the Pleasantville-esque universe the Phoenix created for her, and the conflict spills out into the real world, with Jean finally facing down the entity that’s controlled her life for decades. Their duel isn’t one of psychic blasts or cosmic fire, but a passionate debate on destiny and choice. This is clearly the moment Rosenberg built this book around, and it’s worth the wait. The Phoenix Force sends everything it can at Jean, including a not-so-surprising guest star, and the scene is surprisingly affecting. Rosenberg nails a character that is really hard to write on her own; he leans into her determination and love, but builds that out into something new. The penultimate page of Resurrection has a heartbreaking moment of truth so insightful I found myself gasping while reading it. What Matt Rosenberg understands is the duality of not just the Phoenix, but of Jean’s relationship to it: it’s given Jean the power to defend those she loves, it’s saved her life, but it’s taken more from her than anyone can possibly imagine. Jean is at war with a fundamental part of herself, and exorcising it is, thanks to Rosenberg’s writing, agonizing.

There are certainly some confusing choices throughout this issue and the series as a whole. Kitty’s involvement as lead of this operation makes little sense. She’s never been particularly close with Jean, and has never fought the Phoenix Force. Having Storm (Jean’s best friend) and Beast (one of her first classmates and the resident expert on Phoenix-fighting tech) sidelined in favor of Kitty feels forced, and robs the audience of more poignant callbacks to the focal character’s history.

The bigger misstep is Leinil Yu’s art. A story this emotional and epic cries out for close-ups, facial detail, and character exchanges, but Yu’s style makes the faces identical and bland, especially in the eyes. Losing Logan’s eyes as he coms face to face with the love of his live robs this and other potentially moving moments of their oomph. Yu splits art duties with Joe Bennett, and Bennett’s work on the last half of the book is more effective. Watching Jean face off against the most powerful force in the universe feels appropriately grave and high-stakes in his hands, and his part of the issue is also where Rosenberg’s previous setup takes off. Bennett’s handling of Jean’s face in particular stands out. Her expressions as she debates the Phoenix are nuanced and emotional. Her reaction in the finale is so powerful largely because of the smart choices Bennett makes. On color duty for the whole issue is Rachelle Rosenberg, and it’s her work that really sings. The shifting palette of orange and yellow makes the Phoenix feel alive and pulsing with emotion, and the way those colors spill across the frame and mix with Jean is hypnotic. The interplay of Bennett’s pencils and Rachelle Rosenberg’s colors underscores the stakes Matt Rosenberg’s writing has established, all leading to an incredibly emotional and moving book. Phoenix Resurrection #5 more than lives up to the expectations set by the preceding issues, and provides a satisfying conclusion to a solid story.

There’s never been a better time for Jean Grey to return. Cyclops is dead. Logan is…mostly dead, and Marvel’s mutants need an emotional, optimistic core character they have long lacked. But more importantly, in a time when more and more attention is rightfully being paid to the horrors inflicted on women, seeing a frequently mishandled but nevertheless iconic super heroine resolve the issues endemic to her continuity and take her place in the pantheon of great heroes just feels right. From the ashes of repeated deaths and overemphasized romances rises Jean Grey, and I can’t wait to see what’s in store for her.