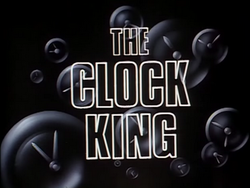 Synopsis: [From IMDB see: here] A ruined efficiency expert with an uncanny sense of timing and schedules plots his revenge against Mayor Hill.

Of all Batman: The Animated Series’s many plaudits over the years, one of its main items for praise comes from the series’s distinct ability to reinvent characters by instilling them with a level of psychological complexity and depth. In The Clock King, writer David Wise does exactly this; taking a low tier villain with a simple clock-based gimmick and then re-imagining him, by adding a further distinct psychology, which  is as fascinating as it is darkly comic.

Originally a Green Arrow villain with the alias William Tockman, the episode reinvents the character as a man named Temple Fugate (a play on the Latin term tempus fugit), who transforms from high-strung efficiency expert, to the obsessive, psychotic and vengeful Clock King. Following the Joker’s mantra of each Gothamite being ‘one bad day’ away from being transformed into a super-villain, Fugate is turned into the Clock King when he takes some chance advice from Mayor Hill to ignore his schedule just for one day and instead loses a twenty-million-dollar lawsuit by accidentally turning up late at court. As a man already obsessed with being prompt and on schedule, the event ruins Fugate both psychologically and financially, causing him to spend the next seven years plotting his revenge against the mayor.

While the idea of a super-villain gaining revenge on a city official is perhaps somewhat tired, the writers somehow manage to breath fresh life into the concept by using the Clock King. Voiced excellently by Alan Rachins, the episode does a great job of straddling the line between the humorous and weird aspects of the Clock King’s character, whether it be his unsettling, clock decorated hideout or use of clock-based explosives and weapons.

Not only this, by facing Fugate, Batman must fight a villain whose obsession with time has allowed him to memorise all train schedules and traffic timings across the city. Whether it be changing traffic lights to cause car accidents or rescheduling automated subway trains to collide in a new subway station, the Clock King appears as dangerous threat to Gotham, as opposed to simply a fun ‘gimmicky’ villain. Moreover, Fugate has studied Batman as well; timing and predicting Batman’s movements to stop him before he has attempted anything. It makes for a fun, but ultimately dangerous character, who can use the very city and its routines to not only put Batman in peril, but also plot his revenge.

While the animation is somewhat average in comparison to some of the earlier episodes, appearing somewhat jerky and less fluid in places, The Clock King succeeds primarily due to its fun writing and elaborate ‘trap-styled’ set pieces, which distinctly homage the 1960s Batman TV series (Note: incidentally, the Clock King did feature in two episodes of the 1960s TV show, as the brother of the Mad Hatter as played by Walter Slezak). Whether it be sealing Batman in a bank vault and draining its air, or tying Mayor Hill to the hands on the city clock-tower, the episode revolves around these set pieces that hark back to the classic two-part format of the iconic 1960s show.

The episode’s script also comes full circle at some great moments and is exceptionally tight. Whether it be the revelation of Hamilton Hill unwittingly being part of the law firm that successfully sued Fugate, or the humorous irony of Fugate planning to crush Hill using the clock hands at 3:15 (the time Hill told him to move away from his schedule) the script appears surprisingly seamless and comes full circle at important moments, which heighten its dramatic effect.

Ultimately following in the tradition of previous episodes such as Heart of Ice (See my review: Here) and Feat of Clay (See my review: Here), The Clock King also continues Batman: The Animated Series’s tradition of reinventing classic characters from DC Comics’s back catalogue. With a tight script, a refreshing take on an old B-list villain and a direct homage to past iterations of the dark knight, The Clock King becomes one of the most interesting and fun episodes of Batman: The Animated Series’s early run, as well as a good illustration of the series when it is at its most effective.