Wolfman and Raven! Reunited and it feels so good! The writer who first introduced us to Raven in DC Comics Presents #26 in October 1980 (alongside artist George Perez) has returned to his creation with a new twelve part mini-series. They had me at Wolfman.

This series follows Raven, going by Rachel, as she adapts to life on the coast with her Aunt Alice. She now has friends without superpowers and goes to bonfires. She slowly introduces them to her background growing up in a cult. So far, she leaves out the demon father. Her Aunt Alice is a woman of the church hoping to gently introduce Raven to Christianity. Alice seems unaware that Raven’s father is Trigon, a demon hoping to enslave Earth. Raven finds and tries to help a woman being chased by an armed security force. She learns the woman is far from an innocent bystander. Meanwhile, Baron Winters, leader of Nightforce is watching and he believes it may be time for Raven to be tested. Good and Evil can not stay harmoniously balanced. 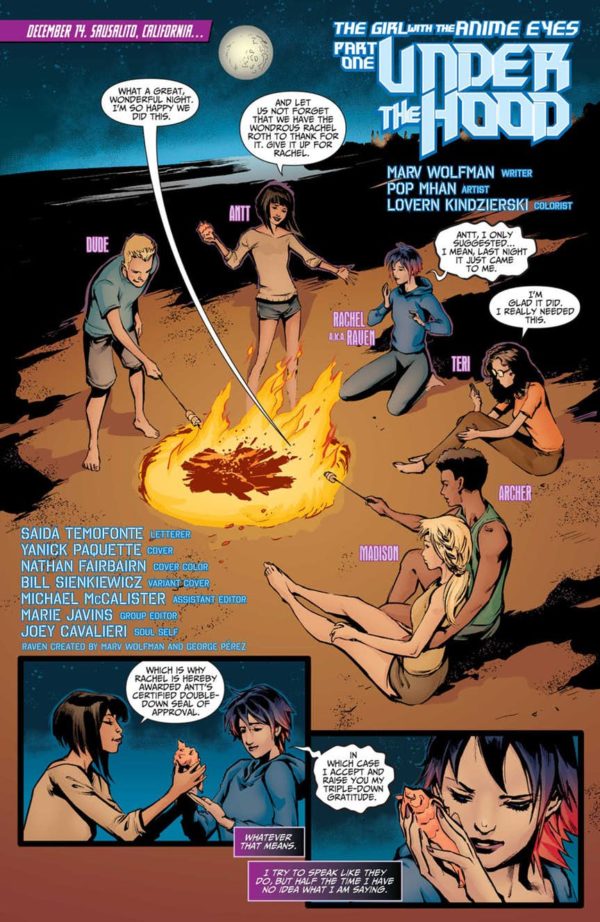 This issue did a great job laying the foundation for the mini-series. I don’t just want to see more of the central plot. I want to see Raven with her new family and with her new firends when they find out who she is. Wolfman says there will be family drama with the return of Raven’s mother in this series.

The writing is pitch perfect. Marv Wolfman hasn’t lost a step, and he still knows how to write one of his greatest creations. I want more, and I cannot wait to see where this series goes. I could read 12 issues of just her personal life, if its Wolfman holding the pen. Mhan’s art is perfect for the world of Raven. Nobody draws a better leopard. He both grounds the work with his realism, and he allows the darkness and paranormal to flourish. The colors by Kindzierski are gorgeous.

Verdict: Buy! If you grew up with the comics, the 2000’s TV show, or your kids (0r you, I won’t tell) watch Teen Titans Go!, pick up this comic. It is a perfect exploration of a phenomenal character. I can’t wait for the next issue. I would make a deal with Trigon to get more Raven now.