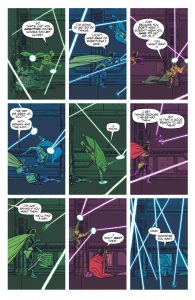 King has called this issue a mid-season finale as the series will be taking a month off and big reveals and cliffhangers are a tried and true feature of mid-season finales. Mister Miracle does this beautifully in what has and continues to be an innovative and deep look into Kirby’s fourth world.

Mister Miracle and Big Barda are on a mission to confront Orion after he summoned Mister Miracle to his trial, which they all knew was a death sentence. The whole issue consists of a heist mission into Orion’s throne room through the numerous, perilous security measures and rooms, highlighting why Mister Miracle is the man who can escape anything. King though makes this comic a touching, as he gives further insight into Mister Miracle and Big Barda’s relationship as the pair throughout the issue discuss how they should remodel their apartment. King uses this to delve into the heart of the characters and their relationship which creates an interesting contrast to the otherworldly visuals and violence. This series does not, as it would be all too easy to, stagnate or freeze these characters in time, but allows them to grow and progress in a natural and meaningful way.

Gerads in this issue does probably his best work on the series yet with such vibrancy and creative panelling, especially when they are going from room to room. Whether it be ravenous sea monsters illuminated by shades of blue and green, or an enclosing room, where the panel fills with more white as the room shrinks, Star Wars style. The art is colourfully gritty in the best way.

Buy. This series is simply stunning with Kings trademark deep conversations and striking look into relationships, PTSD and the Fourth World. Paired with Gerads art which marries heart and depth with violence perfectly, this series needs to be read and as there is a month off, you have no excuse to not catch up.