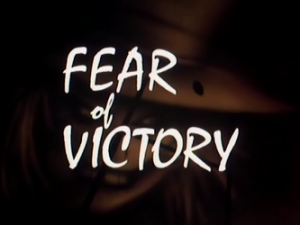 Synopsis: [From IMDB see: here] While investigating a mysterious series of athlete panic attacks during games, Robin is exposed to the fear toxin of the culprit, The Scarecrow.

Following the Scarecrow’s largely successful debut in the third episode of the series (see my review of Nothing to Fear: here), the character’s second appearance in Fear of Victory largely carries on from this initial appearance, while attempting to keep things fresh. After several athletes (including Dick Grayson’s own roommate) appear to break down terrified during several high-profile sporting events, Batman and Robin quickly deduce it to be the work of the Scarecrow, who has broken free of Arkham and is betting against them to fund his continuing fear experiments.

While the plot may seem somewhat ludicrous, the episode strangely manages to placate these weaknesses by offering a largely entertaining story that also makes the interesting decision to shift its focus on Robin’s character arc as he attempts to face his fears, save his friend and eventually help defeat the Scarecrow.

Loren Lester puts in another excellent performance as Robin and having touched upon Robin’s appearance in Christmas with the Joker (see: here), it is worth reiterating here that the writer’s decision to envisage Robin as a teenager is an excellent one. Taking cues from Denny O’Neil and Neal Adams’s run on Batman, the series’s creators are not only able to ground what can at times be a difficult character to include, but they are also able to allow Batman to work independently by using Robin’s academic life as the plot device. It is a great ploy, one that works for both the series, but also this specific episode by tying in directly with the plot by having Robin’s football superstar room-mate one of the key victims of Scarecrow’s attack and ensuring that Robin is also exposed.

Yet Lester’s Robin is not the only character who works well within the episode. Having dispensed with the Scarecrow’s original ‘sock-head’ like appearance, this episode signals the first real character redesign, providing a new version of the Scarecrow with a slightly creepier, more ‘Worzel Gummidge’ inspired design. It’s a more effective design choice, one that not only appears more threatening than the last design, but also homages the character’s comic book roots at the same time.  The character’s voice actor, Henry Polic II again puts forth a great performance and can again exude the same menace and arrogance that made him so much fun in his original debut.

Furthermore, Fear of Victory also illustrates some great animation, with the animators excellently taking advantage of the Scarecrow’s fear toxin to demonstrate its potency. Whether it’s the scarecrow’s face twisting into a sharp-toothed horror or opposing football players transforming into ghoulish monsters, Fear of Victory has some great moments which are supported by some entertaining action sequences. Surprisingly, the episode’s tense climatic fight between Batman, Robin and the Scarecrow, has echoes of Christopher Nolan’s The Dark Knight Rises, which saw Bane stage a similar terrorist plot against a football stadium full of spectators with more devastating consequences.

To summarise, while Fear of Victory’s plot may seem a little over the top, it is nevertheless an entertaining episode that has some solid animation, as well as some tense action sequences. Furthermore, by centring on Robin, the episode, while at times simplistic in its character development, also provides a fun alternative to what could have been a simple rehash of the Scarecrow’s debut episode. Although the episode may be overshadowed by more psychologically complex Robin-centric episodes such as the excellent Robins Reckoning 2-parter and Old Wounds, Fear of Victory nevertheless provides a fun, well-made episode that follows on from the good work done in Nothing to Fear.