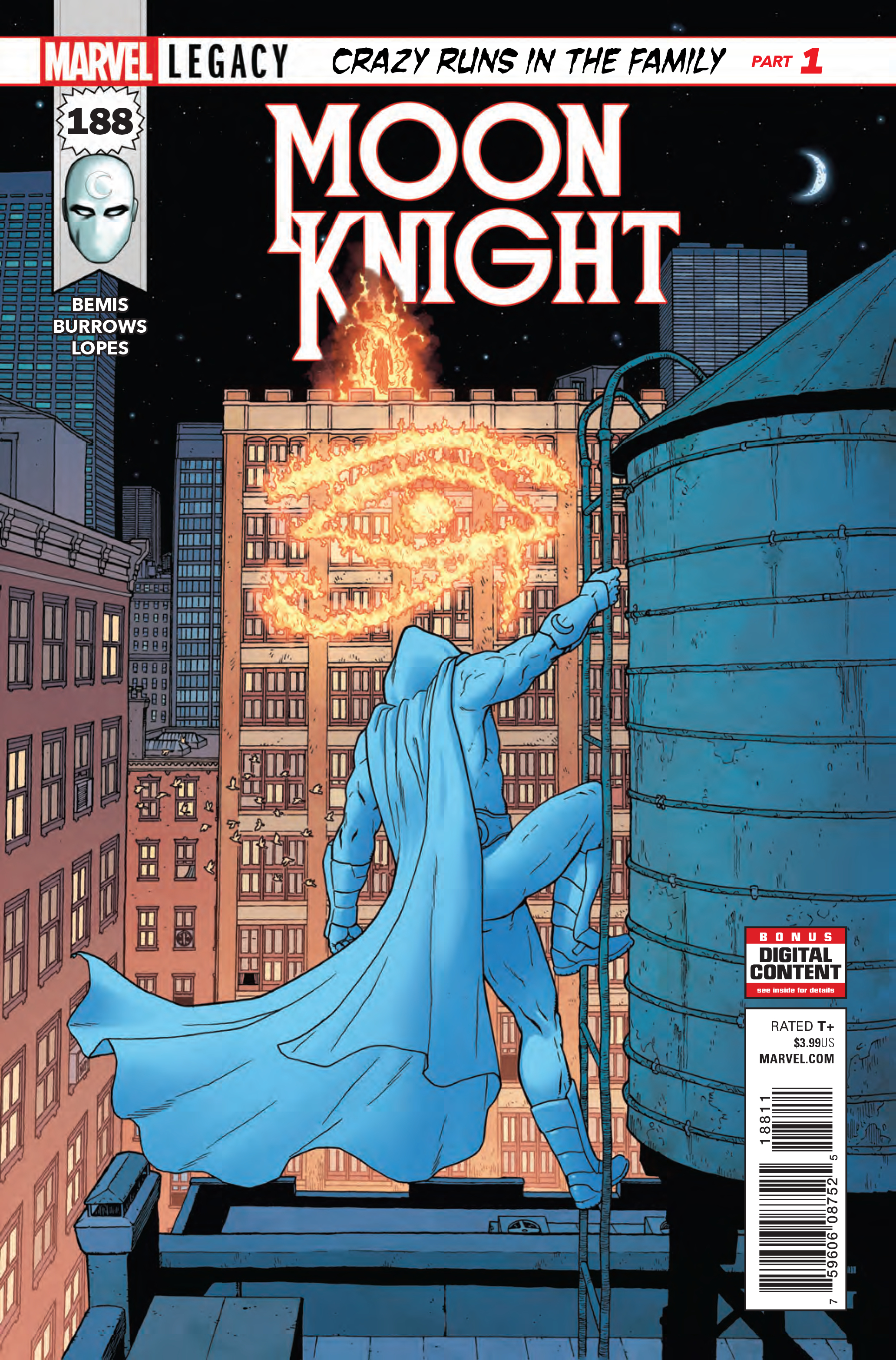 Moon Knight is one of the most unusual comic book characters in Marvel’s roster, and considering said roster includes a biker with a flaming head and once rode a flaming mastodon, that’s quite a statement. He started out a standard mercenary, and as his story progressed, his eccentricities have grown. He started suffering from mental illness, eventually getting a diagnosis of  Dissociative Identity Disorder (DID). The many aliases he kept in order to gain access to information and resources became outright identities. With a new run coming, written by Max Bemis and art by Jacen Burrows, I thought it would be good to give a quick synopsis of the history of the character then say what I want from the new comic.

Moon Knight, originally concieved as Moonblood by Doug Moench and Don Perlin, was a “villain” for hire by a group called the Committee to fight Werewolf By Night‘s Jack Russel. (I would be perfectly fine with the return of that guy). The uniform and name were The Committes’ idea. Moon Knight was a character invention to catch Jack, and the character was played by mercenary, Marc Spector. The cape was initially tucked into his writs, but otherwise, the character matched the classic look he would sport in his eponymous series. This story also introduces Jean-Paul Duchamp, aka Frenchie, Moon Knight’s best friend and pilot of the Mooncopter, though it isn’t how you think. (More on that later)

After his debut in Werewolf By Night, Moon Knight went on to show up in Marvel’s Spotlight #28-29, fighting the Conquor-Lord. These Spotlight issues introduced the alternate identities, Steven Grant, the playboy financier, and Jake Lockley, the nose to the street cabbie. The idea of DID started to be realized in these issues, though it was still in its infancy. The Moon Knight Family was also introduced: his on-and-off girlfriend Marlene, his diner owning friend Gena, Crawley the homeless informant, and Samuel, Steven Grant’s butler.

After Spotlight, Moon Knight appeared in Defenders #47-50, and Peter Parker, the Spectacular Spider-man. His big break was in Hulk #11, when Hulk began including mini issues of Moon Knight in the back. These short stories served as a springboard for Moon Knight to get his own series, years after his debut. The first thing Moon Knight tackled was retconning. Moon Knight #1 divulged that the previous origin was a fake. Marc Spector was already Moon Knight before fighting for the Committee. Frenchie had infiltrated the organization to set it up, so that they thought they were the creators of the Moon Knight identity, when Marc was secretly already fighting under that title. The true origin of Moon Knight occurred in a tomb in Sudan.

The now accepted origin story is that Marc Spector and Frenchie were mercenaries for an evil man named Raoul Bushman. When Raoul raids a dig site, he kills the professor in charge, Dr. Alraune, father of Marlene. (He bit into his neck with metal teeth ala Jaws from the James Bonds movies.) Marc fights Raoul and loses. Left for dead, Marc drags his body to the dig site, and he dies in front of the statue of Khonshu, am Egyptian god. He is resurrected by the god, who makes him his avatar. From then on, Marc Spector is Moon Knight.

Moon Knight goes onto fight all sorts of criminals and creatures that go bump in the night for 187 issues. He befriends a Detective Flint, who serves as his NYPD liaison. He is an Avenger, Defender, and a protector of night travelers. Moon Knight is sometimes hunted, and he jumps at the chance to join Tony Stark’s Initiative during the Civil War. Norman Osborn then hunts him, and he flees with his fracturing sanity to Mexico. He runs into the Punisher, and after hiding for too long, Moon Knight comes back to New York City.

Moon Knight stays in NYC long enough to fight Bushman, who was raised from the grave by the Hood at the behest of Osborn. He beats them. In a run by Brian Michael Bendis, he goes to California. There. he finds an Ultron head in the possession of Count Nefaria. He develops other existing super heroes, such as Captain America as alternate identities. In an interesting move, Bendis has Moon Knight fall for one of the characters he populariezed in New Avengers: Echo. She is unfortunately murdered.

Moon Knight goes back to NYC, developing another identity, this time Mr. Knight. Think Moon Knight, but in a suit instead of cape and a little more low key. The problem is this series of Moon Knight doesn’t keep a team for more than 6 issues at a time. In the last run, by Jeff Lemire this time, he fought Khonshu himself, separating from him and possibly ending his many identities. That brings us to Moon Knight #188, due out on November 8th.

First off, I want to say that I am not here to trash the last few runs of Moon Knight. I consider myself blessed to even have a Moon Knight comic when its available. He is far from a standard-bearer for Marvel, so I recognize my luck when I get one, but Moon Knight has not received a fair run. In the last several years, he has had many different writers, and none have created a coherent story for his personal growth.

The most recent Lemire run was revolutionary, don’t get me wrong. It probed the sanity of Moon Knight, and it brought Moon Knight back to his Egyptian roots with him battling the god that gave him his powers, Khonshu, while also fighting as the various personalities Moon Knight has accumulated through the years. I loved the werewolf alien race. It was a great nod to fighting the Werewolf by Night.

My issue is, because of all this bouncing around, Moon Knight has not been able to grow. He has made some peace with his other personalities, but he left the last run with no clear direction. He has barely been around his core group, and he has not built any new relationships. The growth of relationships is one of the best parts of any superhero story, be it Batman or Captain America. You love the people in their lives, because they only help the hero remember who they are. They help them grow.

Also, I want Moon Knight to stop being defined by his mental illness. It is a bold choice to have a hero with a mental illness to confront and battle, but he doesn’t feel like he is a functioning person. The last run made you question his sanity for the one hundredth time. I want to see Moon Knight become more than just his illness. He is a hero with a disability, yes, but the fact that he doesn’t let it slow him down is part of what makes him a hero. Right now, he just feels like an outdated cliche, and modern readers deserve more.

The other thing is, Moon Knight hasn’t had a standard story arc since the Bendis run. His run before Lemire’s run was full of short little arcs. They were technically well made, accomplished little for the character. Outside of a spiffy new uniform, Moon Knight had nothing change for him. He was in the exact same boat beginning to end, you could skip those years of Moon Knight and be no less informed on the character. Moon Knight has been stagnant. The series felt more like out of canon graphic novels and limited series runs than a true series. I want Moon Knight to grow, I want him to interact with his stable of support, and I want stories with real stakes. Stories that feel like it truly matters that Moon Knight exists.

He has such a unique perspective and set of skills, that it is crazy to me that he can’t move forward. He inhabits one of the more mature niches in the Marvel Universe. A niche that would serve as a foil to the Unbeatable Squirrelgirl for the Marvel Universe and competition to DC’s Constantine. It could finally tell a good story of redemption and mental illness, where the illness does not define the character, the way that Oracle was not defined by her physical condition.  Moon Knight is a hero that fell farther than any other before since donning the suit and cape. It’s time for him to rise.