Wonder Woman: Her Creator and Creation

The “birth story” of the Amazon Princess by Bob Reyer

(To honor the 75th Anniversary of the greatest super-heroine as her solo film debut nears, I thought it appropriate to re-print this piece about her “real-life” origins! This was originally published August 27, 2013. rrr)

Wonder Woman was created by Harvard-educated psychologist Dr. William Moulton Marston, who was also the inventor of the polygraph lie detector. His many stage appearances with his device, plus his numerous popular magazine articles have many calling him the “Dr. Phil” of the 1930s! More importantly, he was a progressive thinker with many theories on the subject of gender equality who believed that the inherent emotional and intellectual qualities of women gave them a greater strength than men, as a woman’s power was administered with compassion. In fact, in a 1937 New York Times article, the good doctor predicted that the United States would be a matriarchy in a hundred years! Dr. Marston’s beliefs were certainly informed by the strong women in his own life: his wife Elizabeth, a lawyer and educator, and his former student Olive Byrne, who co-wrote many of his articles, and whose dark curly hair and penchant for wearing large metallic bracelets might just sound familiar.

A 1940 article for Family Circle Magazine titled “Don’t Laugh at the Comics!” brought Dr. Marston to the attention of Max Gaines, president of All-American Comics, the sister company to National/DC. Dr. Marston decried the “blood-curdling masculinity” and destructive nature of heroes who only triumphed through violence, as well as the utter lack of any character who could be an aspirational figure to children, and in particular to young girls. Max Gaines was said to say “Well, why don’t you come up with something yourself?”

With the help of Olive and Elizabeth (who remarked “She must be a woman!”), Dr. Marston set out to create a character who would “have the allure of an attractive woman, with the strength of a powerful man”. The visuals were provided by veteran cartoonist Harry G. Peter, whose singular style meshed perfectly with the nature of the story. Together, this team presented to the world…Suprema, quickly renamed Wonder Woman by All-American editor Sheldon Mayer. Wonder Woman would debut late in 1941 with a short origin tale in All-Star Comics #8 (which was the home of the Justice Society of America), and then one month later as the cover and lead feature in Sensation Comics #1. Within six months, the Amazon Princess would also headline her own book, and at their peak, these two titles would sell over 2.5 million copies per month, among the best sellers of the period. For the setting of her origin, Dr. Marston tempered the Amazons of Greek Myth. They still defeated their male antagonists, but retreated to Themyscira not due to a hatred of men, but from a desire to stand strong on their own. Hippolyta, the Queen of the Amazons, would eventually crave a daughter, so Athena would grant her the knowledge to craft a statue of a perfect infant girl, a clay figure into which Aphrodite would breathe life–thus was Princess Diana “born”, surely one of the most poignant origins in the history of comics.

After some years, U.S. airman Steve Trevor would crash-land on Paradise Island after an aerial dogfight, and the Amazons would heal him with their advanced technology. Made aware of the growing threat of Nazi fascism, they would decide to join the fight against oppression. Through a series of contests to determine a champion (including “Bullets & Bracelets”), the Princess Diana would emerge as their finest, and Quenn Hippolyta would send the Amazons’ only daughter back with Steve to help defend freedom and equality, and to serve as their ambassador to Man’s World in an attempt to promote understanding amongst all people,  and of all genders.

Through to the 1947 death of Dr. Marston, that mission would be accomplished via a never-wavering attention to what he felt were the important core values of his creation. Although a formidable warrior, Wonder Woman would always try to find a solution without resorting to violence. This isn’t to say the stories lacked action and adventure, as they were filled to the brim with gods and other mythological beings, creatures from other planets and dimensions, as well as charming interplay with “regular” villains like The Cheetah, and her human supporting cast, most prominently Etta Candy and the Holiday College girls.

What was always most prevalent was Diana’s ability to handle adversity; no matter the situation, she carried herself with a confidence in her own abilities that was quite different from the bravado of the male super-heroes, and miles ahead of the majority of the portrayals of women in comics of the time, whether heroines or civilians. Wonder Woman could be counted on to empathize with, and act on, the plight of common folk, as well as show compassion to her defeated foes, often taking them with her to Paradise Island to rehabilitate them into productive members of society.

With Dr. Marston’s untimely passing, occasional WW writer Robert Kanigher would pick up the full-time scripting reins, and the focus of the stories began to subtly shift toward the more conventional, and with the departure of visionary editor Sheldon Mayer in 1948, this would become a head-long rush toward mediocre “romance comic”-styled story-telling. Harry G. Peter would continue on through 1958, when Mr. Kanigher, calling his art “grotesque”, showed the door to Wonder Woman’s original artist. Penciller Ross Andru and inker Mike Esposito would take over, remaining for more than ten years, but despite some interesting stories here-and-there, the special magic was now completely gone. There were far too many tales of a Steve/Wonder Woman/Diana triangle (or quadrangle/quint-angle if you count Amoeba Man and Mer-Man!), not to mention un-neccessary additions such as Wonder Girl and Wonder Tot. 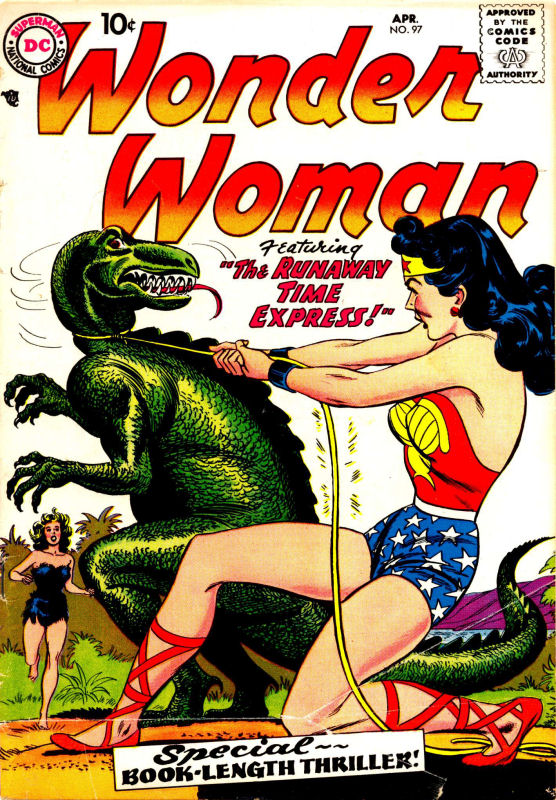 For many of us who discovered Wonder Woman during the Silver Age, it was only through these stories, or her appearances as a member of the Justice League that we knew her. When the Golden Age Marston/Peter originals began to be reprinted, whether in DC Annuals, Jules Feiffer’s “Great Comic Book Heroes”, or the Ms. Magazine hardcover collection curated by Phyllis Chesler and Gloria Steinem, it was clear to see that major character drift had occurred down the years. As a fan of even this reduced Amazon Princess of the Sixties, the thrill of reading these un-fettered adventures was breath-taking. I would urge anyone interested in the “true” Wonder Woman to avail yourself of the pleasure of seeing Diana as her creator intended her to be: an inspiring figure for girls (and boys!), a force for equality and a paragon of justice, with a heart filled with love for all.

Sountrack (kinda): What else could it be but the opening to the Lynda Carter TV show: