Valiant High is a re-imagining of the Valiant characters all attending high school and set into a world of John Hughes-isms. The concept is absurd and colorful as is the art and writing. It’s a comic that is self-aware of its super hero foundation while mixing in high school archetypes for characters that Valiant fans love. It works as a wonderful homage to the universe while remaining accessible to new readers.

Daniel Kibblesmith’s writing is filled with puns and punchlines while Derek Charms’ art evokes a similar tone. These two along with colorist David Baron’s collaboration make the comic pop creating memorable moments like Deadshot as the loud mouthed, raucous football coach reprimanding Peter “Sting” Stanchek’s teenage incarnation for using his powers on school premises. This is what makes the comic feel authentic because it’s using the usual teenage premise through a super powered lens. These larger than life characters trapped are trapped in their adolescence. 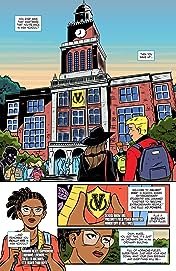 The comedy of the issue relies on how these superpowers are used by teenagers navigating their personal lives. Amanda McKee AKA LiveWire, the star of the issue, uses her ability to talk to technology to upset Charlene Dupree by sending an embarrassing text message through Charlene’s phone. The humor works because Derek Charm’s character acting sells each joke that Kibblesmith puts down.

The issue is filled to the brim with the Valiant Universe character and yet it never feels bloated. Each character has their moment to shine or fall. The angst can be felt on nearly every page radiating from McKee’s need to graduate high school and become a proper superhero. It wins the reader over with its humor and charm because these are characters with aspirations that go beyond high school or wherever it is one feels stuck. It connects on a more visceral level with anyone who has gone to high school. It’s bubbling with enthusiasm that ends with a last page sure to set ablaze your desire for more.

Buy! It’s a ton of fun! For someone who has only ever read a few issues of Jeff Lemire’s Bloodshot U.S.A it still completely worked for me. This is a comic I would recommend to my former teen self because it’s not cynical or brooding, it’s just plain old fun with characters you’ll want to read more of as you go along. I really loved this issue and I can’t wait for more. You can pick it up digitally here: http://tinyurl.com/n3hufym